Can you name the key differences between grizzly bears and black bears? When was the last time you carried bear spray with you outdoors? These are questions a group of fellow young professionals and I asked residents of eastern Washington in 2018, seeking to better understand what people in the region know about grizzly bears.

My group members and I are part of a program called the Emerging Wildlife Conservation Leaders, or EWCL. This initiative brings together up-and-coming young leaders in the wildlife conservation field for capacity-building and training, and to complete a project focused on a specific species. Ours was the grizzly bear. With most of our team working internationally, we knew we had a steep learning curve in terms of getting up to speed on the challenges and best practices of living alongside grizzly bears. Fortunately, our project partners at Defenders of Wildlife were invaluable resources in showing us the lay of the land. 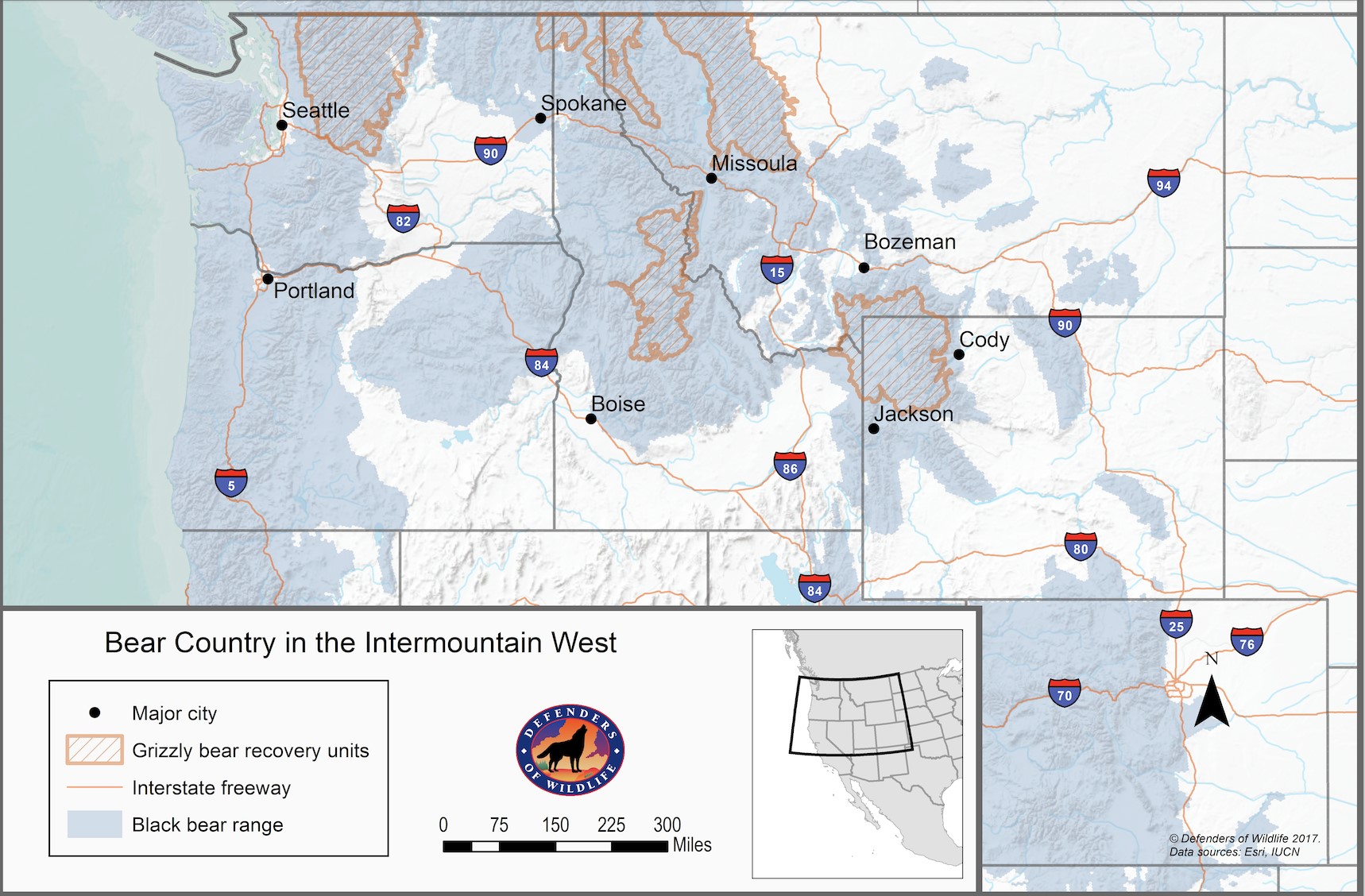 Eastern Washington is usually not the first area that comes to mind when people think about grizzly bears — the entire Selkirk Mountain ecosystem, which also extends into Idaho and British Columbia, has a population of an estimated 60–80 grizzly bears — and hasn’t received as much conservation attention as other ecosystems with grizzly bears. We were able to ensure our project would complement ongoing grizzly bear efforts by attending the Interagency Grizzly Bear Committee (IGBC) meeting in Sandpoint, Idaho in October 2017. This collaborative group coordinates grizzly bear recovery, planning, management, and research across a number of agencies. Not only was this an opportunity to meet some of the local contacts we’d been communicating with via phone and email, but also to better align our work with the objectives of both Defenders and the IGBC. There were two objectives from the IGBC 5-Year Plan for the Selkirks where we thought we could reasonably contribute within the timeframe of our project:

We decided to focus on identifying knowledge gaps in eastern Washington, an area that stuck out to us as somewhere we could be particularly helpful. With generous funding from the IGBC we were able to deploy an online survey geo-targeted to eastern Washington — and were pleased to receive nearly 700 responses! In addition to the questions I posed earlier we asked: How many grizzly bears do you think live in the Selkirks? How would you best describe your feelings about grizzly bears in the Selkirks? Do you carry bear spray, and why or why not? We wanted to paint as clear a picture as possible of what residents did and did not know about living and recreating in bear country, as well as how they felt about the bears’ presence. We received responses across the board but a few noteworthy themes that stuck out:

We used the results of the survey to inform outreach efforts to better equip residents with the most important knowledge for living in bear country. For instance, we printed stickers, which Defenders will distribute at events to encourage people to remember to bring bear spray while recreating. In addition, we funded several bear-proof food storage lockers on National Forest land to further support people and bears living together peacefully!

Our project is only a small piece of the expansive network of individuals and organizations like Defenders who are focused on bears in North America. It was inspiring to witness and be a part the work happening to help people and wildlife live together in this area. The numerous organizations like Defenders of Wildlife will continue working in these areas but we hope our contributions have made a small impact for people and grizzly bears in the eastern corner of Washington State.

Grizzly bears are threatened primarily because of interactions with humans. Reducing conflicts between grizzly bears and humans is critical to grizzly bear conservation.

Here is how you can help protect grizzly bears in North America: