USFWS
All Posts
Hear From Our Experts
Defenders in Action
Wild Features
President's Corner
May 30, 2019

Behind the scenes of every crime investigation is a group of dedicated professionals that aim to solve the hardest cases. Wildlife crimes are no different. The U.S. Fish and Wildlife Service has a facility in Ashland, Oregon, dedicated to the task. 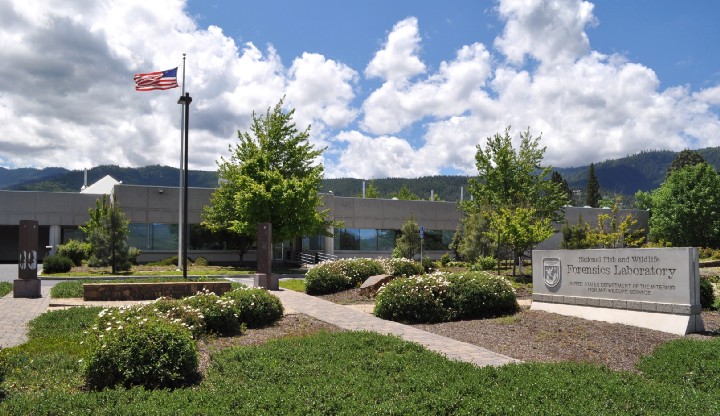 I recently met with Ken Goddard, the director of the Clark R. Bavin National Fish and Wildlife Forensics Laboratory for a tour of the most comprehensive wildlife forensics lab in the world. We were joined by Johnnie French, a forensic scientist at the facility.

The Service’s forensics lab combines old school sleuthing with cutting edge science. It’s Sherlock Homes meets CSI. The lab is responsible for both identifying wildlife victims and the cause of their unnatural demise. Wildlife crime includes everything from killing a federally protected species to trading in internationally protected plants and animals. The lab also examines accidental and unintended wildlife deaths. This includes bald eagles killed by banned pesticides and golden eagles killed by possible powerline strikes. The lab also supports wildlife conservation and management by, for example, assisting wildlife biologists to understand the genetics of wildlife populations under their care.

Understanding the cause of death for wildlife can be more challenging than for crime labs focused human victims. For wildlife crime, the first step is to ascertain the species or subspecies of the victim. This often involves comparing specimens or genetic material from known species to the deceased animal or product. The Service has extensive resources to conduct this first step of their investigation. In addition to maintaining its own collection of comparison evidence, the lab is networked with others around the world under the Convention on International Trade in Endangered Species (CITES) and can use comparison evidence from any one of the 182 countries signed to the treaty. On any given day, the Service’s experts might examine an entire carcass, or a feather in a fishing lure, or a bone flute confiscated in trade, or a container full of illegally cut timber.

As part of the lab’s toolkit, a mass spectrometer allows for near instant analysis of the chemical composition of wildlife products. The lab has traced the origins of traditional medicines that contain illegally trafficked plants or animals to instruments made of endangered rosewood.­

With the broad variation in the types of evidence they process, it is vital for the lab to continue adding to its own collection of reference samples. The way they process certain specimens is an interesting look into how wildlife, itself, assists with crime solving. For example, to add to their bone collection, the lab gets help from a surprisingly common source, beetles. The species, Dermestes masculatus, are better known as flesh-eating beetles. They are found on every continent except Antarctica and are the “Roombas” of nature. Technicians deploy the beetles to help remove soft tissue from teeth, bones and keratin intended for the lab’s growing collection. The beetles are also quite useful in forensic entomology when trying to determine time of death for an animal since they arrive at a carcass between 8 and 10 days after death.