A Tale of Two States: A Closer Look at Wolf Conservation and Management

Wolves are gradually reclaiming their historical home in the Pacific Northwest, with wolves beginning to return to Washington and Oregon over a decade ago. But they are treated differently in each state, making their recovery a disjointed effort. The differences in listing status and recovery approach dictate where wolves can be legally killed and by whom, which impact 1) where nonlethal tools are prioritized over lethal control to reduce conflicts with livestock and 2) opportunities for young wolves to establish new packs across the Northwest. Examining how policy and management plans differ in each state will help explain the wolf conservation opportunities and challenges we encounter.

The first official pack established in Washington in 2008 and in Oregon in 2009. Wolves were not reintroduced in either state, they made their way here by dispersing from Idaho, British Columbia and neighboring areas looking for new territories in what was historically their home.

In the latest 2019 annual count, Oregon documented at least 158 wolves—an increase of 21 individuals from the 2018 count—while the Washington added a minimum of 19 individuals and reported at least 145 wolves live in the state*. Because wolves are social carnivores that live in family groups, as wolf numbers increase, the number of wolf packs and breeding pairs usually increase as well. Interestingly, both states define a “wolf pack” differently. In Oregon a pack is defined as four or more wolves traveling together in winter, whereas in Washington a pack is two or more wolves traveling together in winter. Oregon counted 21 packs and 9 groups of 2 – 3 wolves in 2019, compared to Washington’s minimum count of 26 packs*. But the number of breeding pairs that have at least two pups survive until the end of the year is the best indicator of a recovering population, and it drives wolf listing status and statewide recovery goals. Oregon documented 19 breeding pairs and Washington recorded 10 in 2019.

Once widely distributed across North America, gray wolves now only occupy about 10% of their historic range in the continental U.S. and while some populations receive protections under the federal Endangered Species Act (ESA), they do not in the eastern portion of Washington or Oregon. Federal endangered status only applies to wolves that live in the western two-thirds of Oregon and Washington, with most wolves living in the federally delisted portion of each state. Wolves are still listed as endangered under state ESA in Washington but were delisted from the Oregon state ESA in 2015. Hence, a large proportion of the wolf population in Oregon, which still live in the eastern part of the state, do not have any protection under federal or state ESA.

Both states have wolf management plans implemented by the states’ fish and wildlife agencies, which dictate how each state approaches wolf recovery.

Oregon – State management of wolves in Oregon is guided by a three-phase approach to wolf recovery. Every year, the eastern and western zones are evaluated to determine which phase they are in. Phase I means there are fewer than four breeding pairs of wolves for three consecutive years. Phase III is achieved when wolf population has at least seven breeding pairs for three consecutive years and Phase II is a transition phase. With each increase in Phase number, the restrictions and regulations to protect wolves relax considerably. 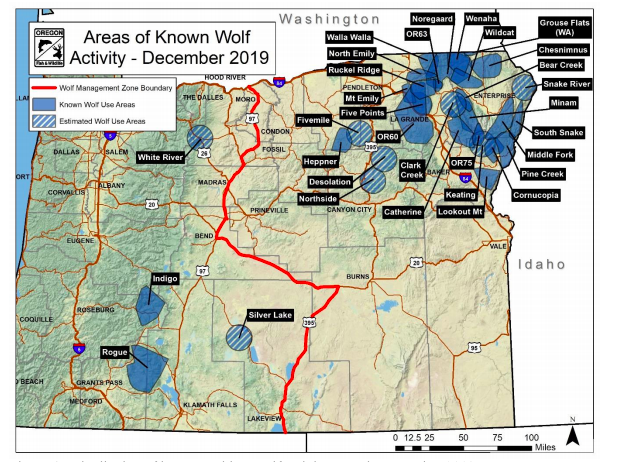 Washington - Washington’s statewide recovery goals need to reach across three recovery regions. Wolves cannot be downlisted unless the goal of at least four breeding pairs for three consecutive years is met in each of the recovery regions.  The southern Cascades and Northwest Coast recovery regions currently do not have any confirmed wolf packs, so downlisting is at least a few years away. But legislative proposals have been introduced to delist wolves entirely in eastern Washington since the region’s recovery goals have been met, and the Washington Department of Fish and Wildlife has initiated a multi-year process to develop a post-recovery wolf management and conservation plan. 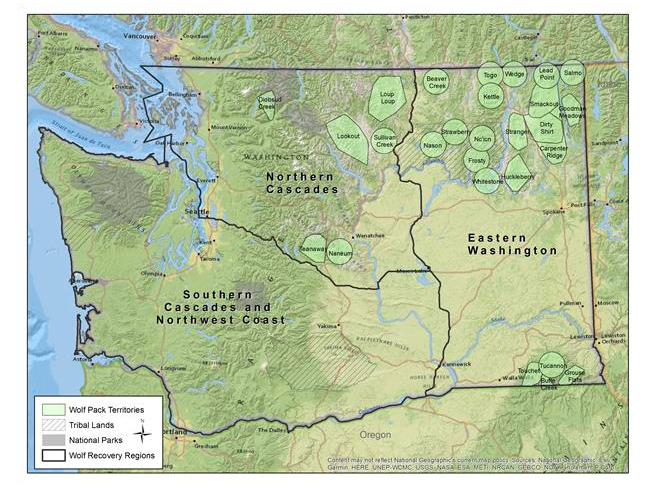 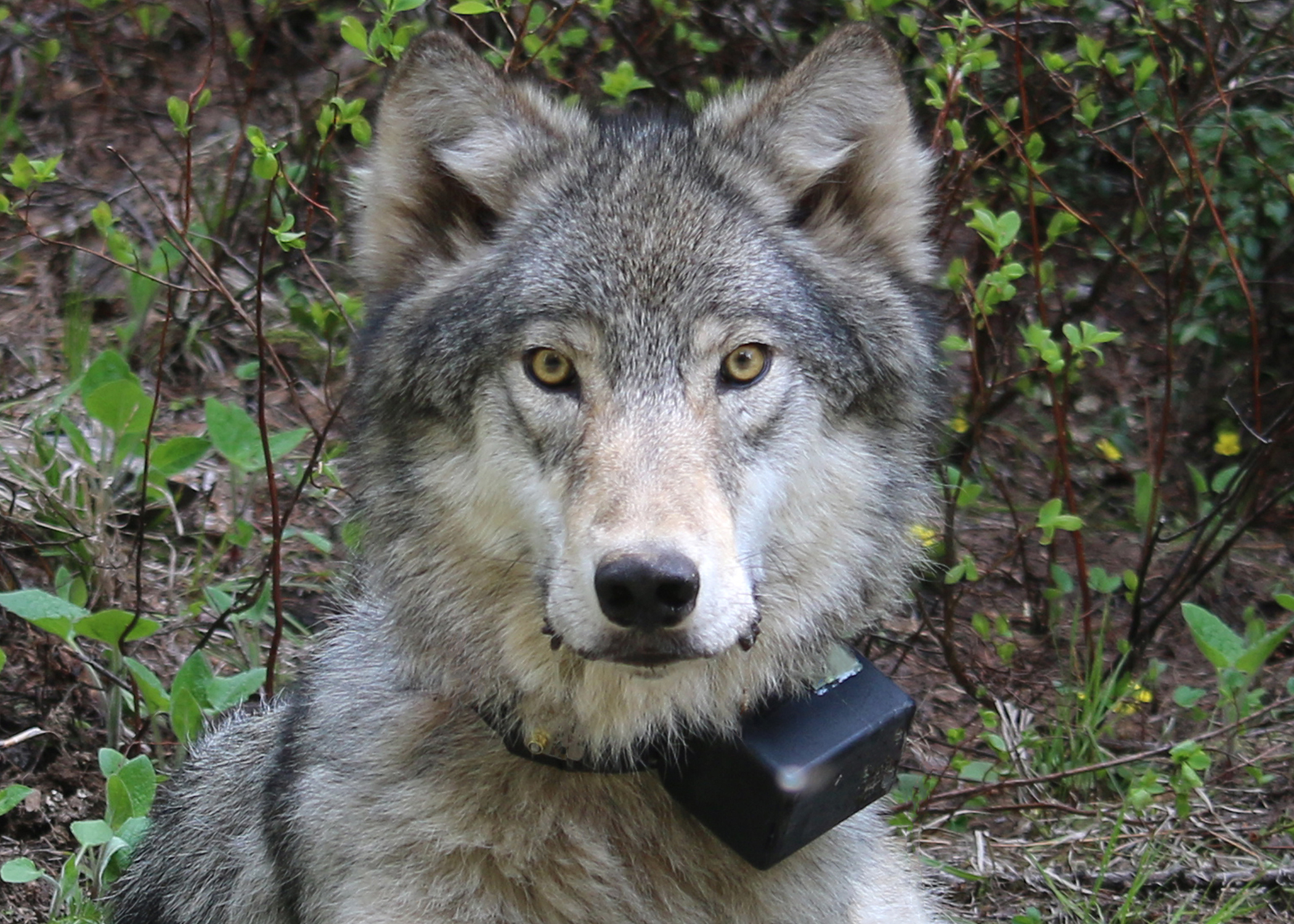 Only a few wolf packs depredate each year, even though there are few places wolves in the western U.S. can live where they will not encounter livestock. Scientific studies show depredation risk increases the more wolves and livestock encounter one another and non-lethal interventions are more effective than lethal control at reducing depredations long-term. Land ownership largely determines which nonlethal interventions will be most effective, and the focus is very different between Oregon and Washington. Although wolf packs spend most of their time on forested public lands in both states, most confirmed depredations in Oregon during 2019 were on private property whereas the majority of depredations in Washington were on public lands. Potential reasons for this difference include where people look for livestock carcasses, landscape characteristics or where prey animals spend most of their time, but the interplay of all of these factors and their effect on depredation is yet to be fully understood.

While the full non-lethal toolbox is being used, each state is focusing on using the interventions best suited for the landscape where most depredations are confirmed. Oregon has focused on bone pile and carcass removal, Foxlights and fladry which help reduce depredations on small, fenced pastures. Washington has focused on increasing human presence on large public grazing allotments using range riders, which is one of the most effective tools for large landscapes when done correctly. However, using non-lethal measures to prevent wolf-livestock conflict is recommended but not mandatory in either state. While both states provide livestock producers with technical and financial resources to reduce livestock losses, only Oregon has enacted rules requiring the use of non-lethals before wolves can be killed. Therefore, we are urging Washington to implement mandatory use of non-lethals prior to authorizing lethal control and for public land managers to adopt grazing plans that proactively reduce interactions between wolves and livestock.

Wolf populations grow and expand when young adult wolves leave or “disperse” from their natal pack territory to join another pack or start one of their own. Dispersal is particularly important in Oregon and Washington since large areas of prime habitat are currently unoccupied by wolves. But wolves can’t read maps and don’t always go where people may want them to. During 2019, five of Oregon’s radio-collared wolves dispersed but only three stayed in-state. (In past years most have left the state.) In Washington, five of the six radio-collared wolves dispersed out of state in 2019 to British Columbia, Oregon, Montana and Idaho. Whether driven by landscape characteristics (valleys, ridgetops) and instincts, or inhibited by roads and human-caused deaths (hunting, lethal control, poaching, vehicle collisions), wolves aren’t moving west as quickly or successfully as we would hope. These dispersal trends affect how quickly wolves can reach state recovery goals, and in Washington this lack of natural dispersal has led to proposals to translocate wolves to Southern Cascades and Northwest Coast recovery region. 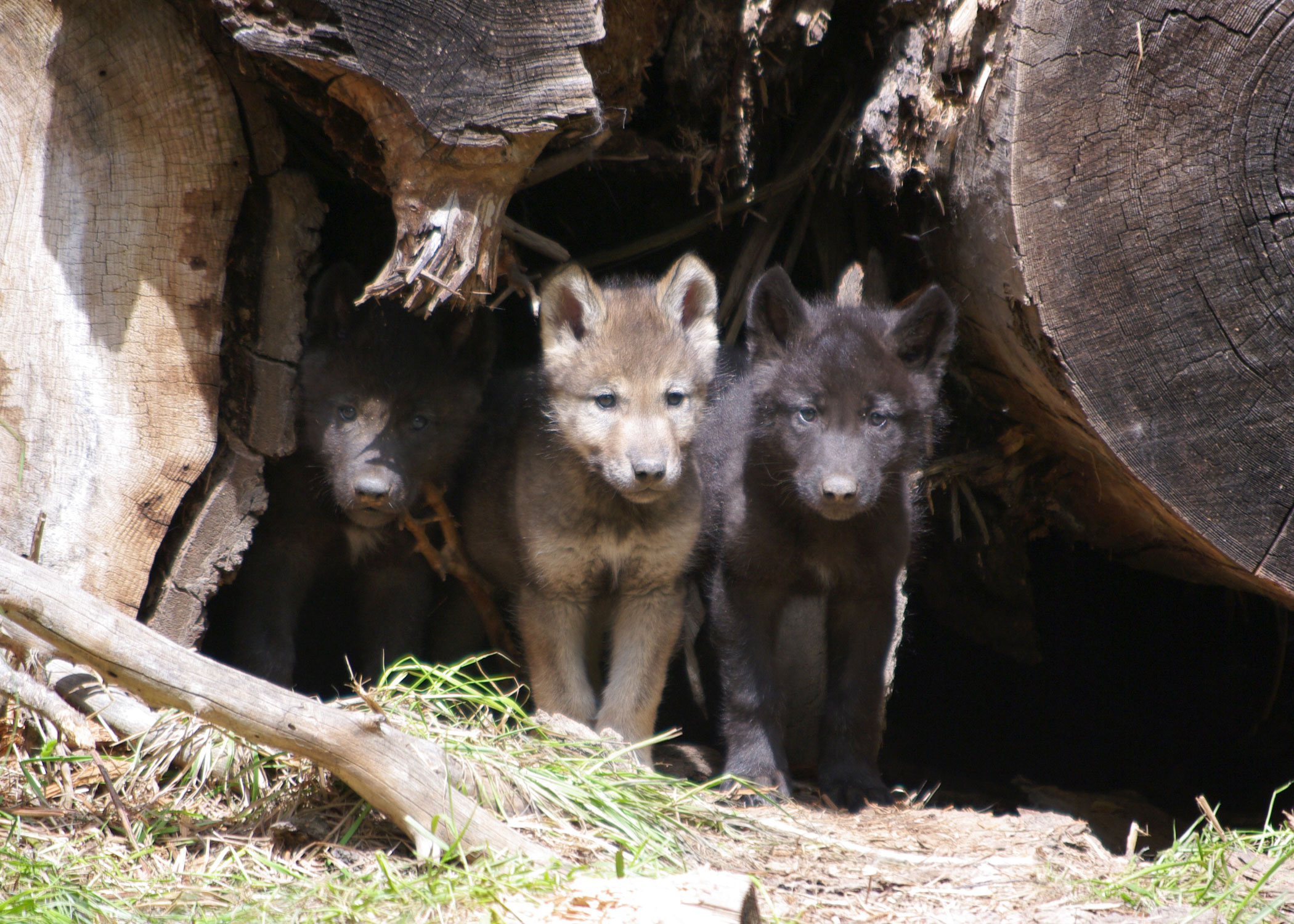 What We Are Doing

Our Northwest program staff are working to help wolf populations increase and coexist with Oregonians and Washingtonians by:

Wolf recovery is dictated by state and federal policies that govern the conservation of native species. The slow but steady increase in wolf numbers in the Pacific Northwest is an optimistic sign for the species’ future in the region. But wolves still have a long road ahead of them before the population becomes robust enough to be considered fully recovered. Reducing conflicts with livestock producers and helping local communities share the landscape with wolves is crucial to giving wolves an opportunity to thrive here once again.

*For the first time, the Washington 2019 annual report includes opportunistic observations of wolves in addition to survey results. Therefore, caution should be taken when comparing to previous years’ minimum count, packs, and breeding pairs.

Northwest Representative
Zoë Hanley is a Representative for the Northwest Program based out of White Salmon, Washington where she leads Defenders’ coexistence initiatives in the region.
Image