Stretching over 600 miles across two states, the Gila River is an iconic natural feature of the American Southwest. From its origin in the pine forests of the Black Range of western New Mexico to its confluence with the Colorado River in southwestern Arizona, the river is fed by six major tributaries. Winding through iconic ecosystems including the arid Sonoran Desert, its waters support forests of willows and massive cottonwoods, vital habitat for more than 300 species of migratory and breeding birds, including many found nowhere else in the United States, such as the common black-hawk and northern beardless-tyrannulet. And high-elevation portions of the watershed host the last remaining strongholds of many native fish, such as the endangered Gila trout. 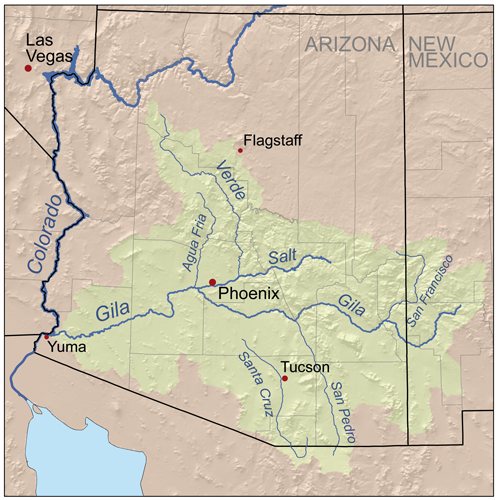 However, what was once the lifeblood of the Sonoran Desert has been drained and diverted to support the ever-growing metropolises of Phoenix and Tucson. West of Phoenix, the river is usually a dry bed and where water still flows, the fragile ecosystem is assaulted by invasive species, drought, grazing and mining, which are only exacerbated by the growing effects of climate change. As a result, 21 of Arizona’s original 36 native fish species are either extinct or federally listed as threatened or endangered.

Degradation of a River System

How did the Gila River system become so degraded? Agriculture and human settlement are not new to the region—the ancient Hohokam civilization flourished by building hundreds of miles of complex irrigation canals drawing water from the Gila. But it was not until the late 19th century that white settlers in the Gila River Valley began restructuring the river by building small-scale dams and diversions to protect their crops from floods and droughts. Major changes in 1911, when the federal government completed the Roosevelt Dam on the Salt River and the Coolidge Dam on the Gila itself in 1928, resulted in a massive increase in the valley’s population, and as agricultural demand outpaced what could be taken from the river, farmers started pumping groundwater on a large scale. But even this water proved insufficient, so Arizona lawmakers began construction of the Central Arizona Project (CAP), a 336-mile-long aqueduct completed in 1993 at a cost of $4 billion. CAP transports billions of gallons of water from the Colorado River to central and southern Arizona each year to support agriculture and the water needs of cities like Phoenix and Tucson. While these feats of engineering made possible a bustling metropolis in the midst of an inhospitable desert, they did so by imperiling the biological world of the Gila River and its tributaries. 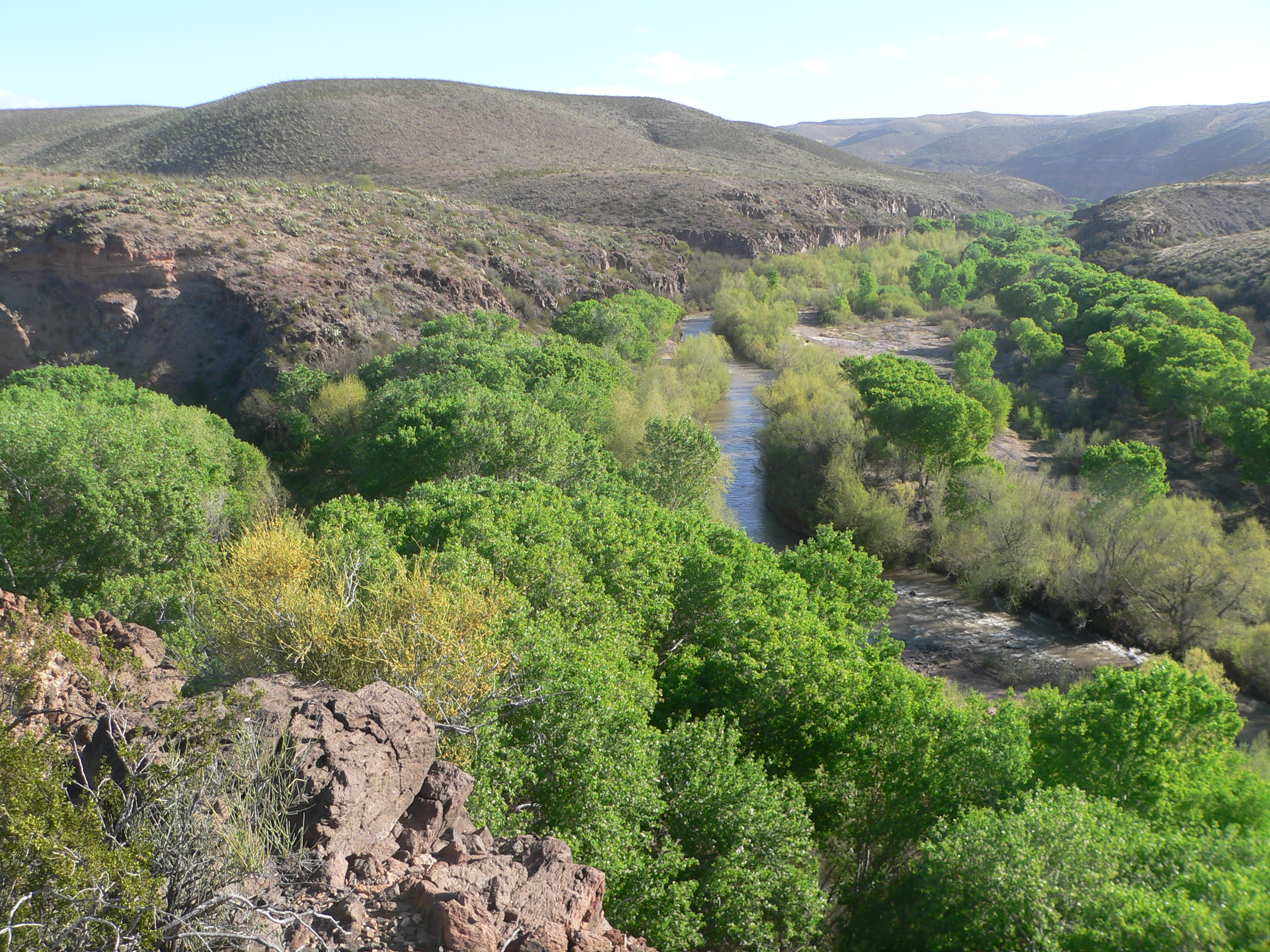 Hydrology of the Gila

Each spring, snow melts in the mountains of the Mogollon Rim and the Sky Islands, flowing gradually and predictably to swell the Gila and its tributaries. By early summer, the snowpack runs out, bringing river flows down to a relative trickle. The advent of southern monsoons in mid-to-late summer refills the drying rivers, which are later bolstered by periodic frontal storms in late fall and winter. Native fishes are well-adapted to these rain events that can dump massive amounts of water into the system in a short time, causing flooding and powerful currents. For example, the tiny native Gila topminnow has behavioral adaptations to prevent being washed downstream during floods, and increases in number relative to its introduced competitor, the mosquitofish, following flash floods.

Because snowpack and water-bearing storms have historically varied so much from year to year, the Gila ecosystem evolved to cope with incredible variation in flow intensity and duration. However, under the current human-dominated system, the river is essentially in permanent drought from dams and groundwater pumping, and the effects of climate change increasingly exert their own pressure. 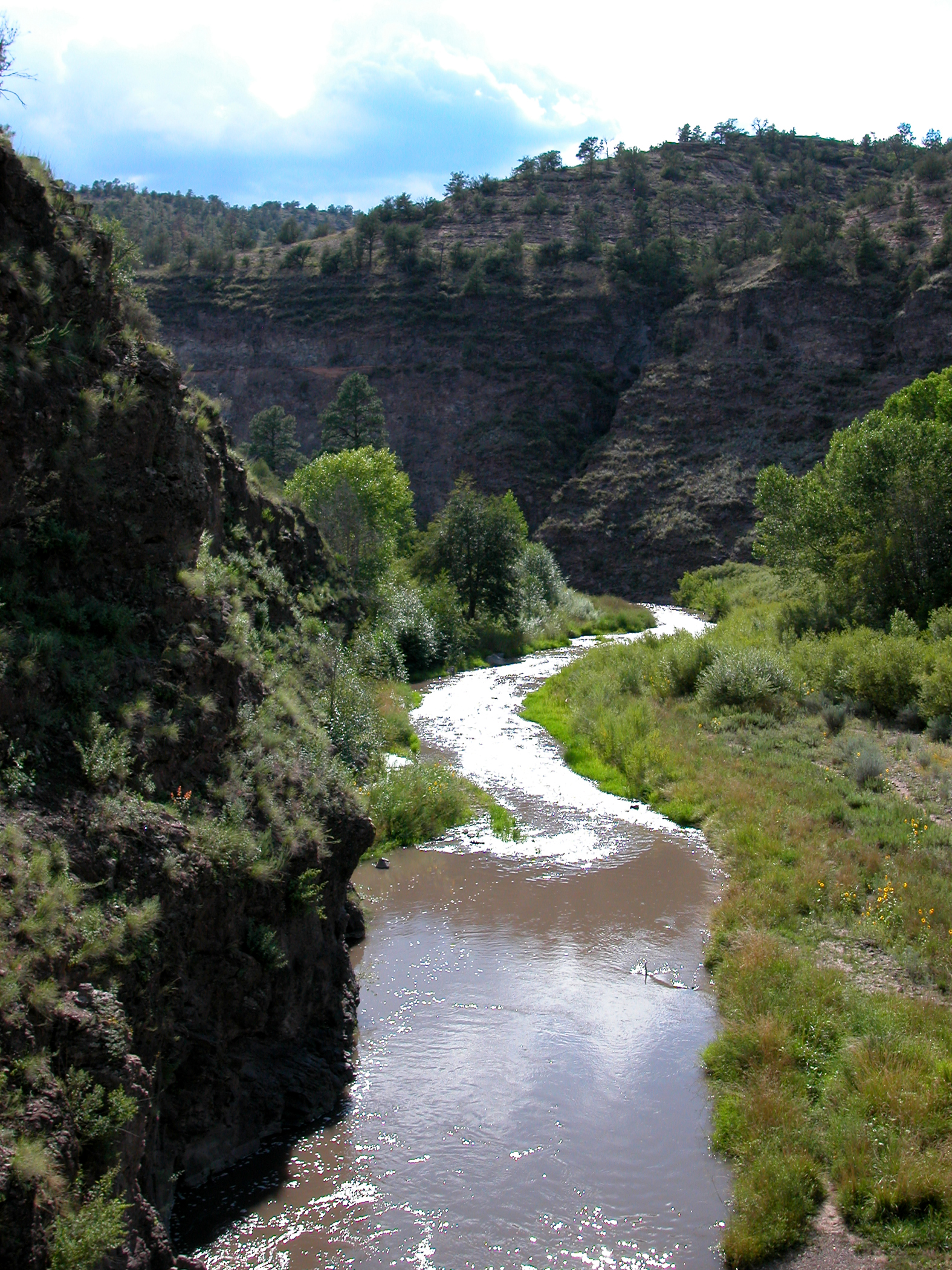 Spring flows annually reshape river bottoms. In early spring, sedimentation increases, but by late spring, rapidly receding flows carry away fine sediment to reveal cobble bars—a micro-ecosystem with nooks and crevices sheltering invertebrate prey and smooth surfaces perfect for egg-laying, providing fish like the endangered spikedace reproductive habitat. Specific cues of temperature and flow intensity trigger these species to spawn. Once larvae hatch, the spring flow has already started to lessen, so the larvae avoid the brunt of the strongest currents. Every step of native fish reproduction happens in delicate coordination with the snowmelt-fed spring flow, but by the end of the century, the American West may be functionally devoid of snowpack due to climate change.

These varied flow patterns also maintain the structural integrity of the native cottonwood-willow forests that line the Gila system’s rivers and streams, essential breeding habitat for the endangered southwestern willow flycatcher and threatened western yellow-billed cuckoo. High-level flows breach the riverbank, soaking water into the ground outside the immediate vicinity of the shore, and thereby replenishing groundwater. In the arid Sonoran Desert, such flooding events are essential for survival and recruitment of riverine trees, understory vegetation, marshes and cienegas. In flood season, rushing water can remove patches of undergrowth, creating structurally diverse mosaics of open areas and dense vegetation. These river-based engineering processes establish habitat for hundreds of resident and migratory birds and for wetland-partial fishes like the endangered Gila topminnow.

When the health of this vegetation is compromised, associated wildlife suffers. Where the loss of spring floods threatens the growth potential of native cottonwood and willow seedlings, exotic tamarisk quickly outcompete them.

Perhaps most importantly, loss of flooding has facilitated the spread of introduced eastern fish, bullfrogs and crayfish and these species have decimated native fish communities. Predatory fish like largemouth bass and green sunfish have eaten some native populations out of existence, while crayfish and bullfrogs threaten the ESA-listed Chiricahua leopard frog and northern Mexican garter snake. Some exotics like catfish and mosquitofish displace natives by outcompeting them for resources, while others hybridize with them. In this manner, nonnative rainbow and brown trout pollute the gene pool of endangered Gila and Apache trout, Arizona’s only native salmonids.

These exotics would likely have fared poorly under the seasonal floods and periodic powerful currents that historically characterized he Gila. But the present tamed and diminished river presents perfect conditions for them to flourish.

While threats to the Gila’s unique ecosystem are many, so are efforts to protect it. Absent the willingness of metropolises and agricultural users to give up allocated water rights—something that is unlikely, particularly given that climate change will increasingly stress water production and delivery systems—solutions must be found around the margins. 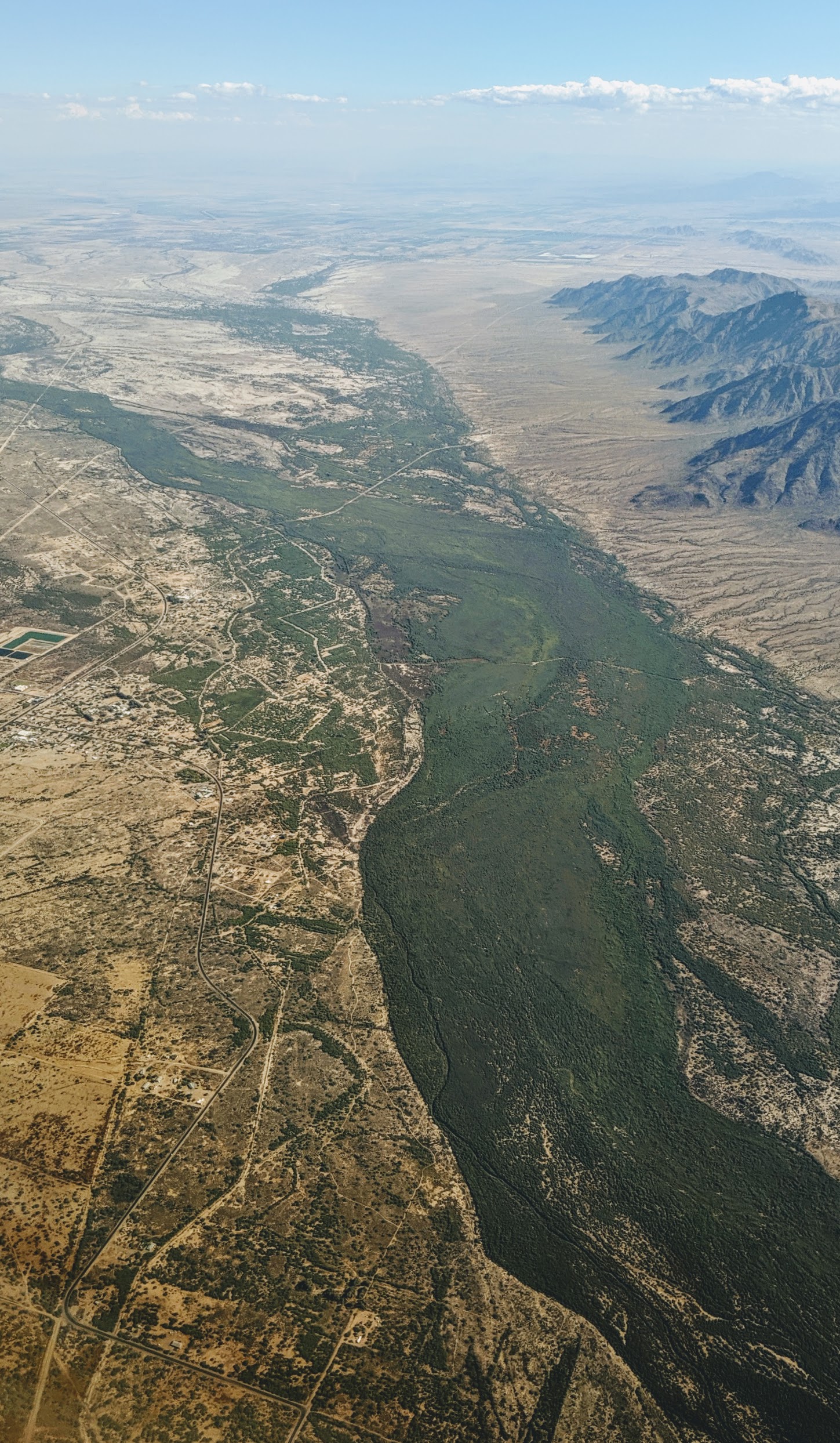 Conservation groups like Defenders play an important role as advocates and watchdogs. Alongside our partners, Defenders monitors federal actions and development proposals to make sure they are as “riparian-friendly” as possible. In our recent submission of federal comments to the U.S. Forest Service, we disparaged their forest plan for allowing more cattle grazing instead of less in sensitive riparian areas.

A huge win came in June when the New Mexico Interstate Stream Commission voted against permitting the construction of a major new dam on the New Mexican portion of the Gila River.  This victory was the result of decades of campaigning by conservationists, elected officials, tribes, landowners and recreationalists who fought to keep the upper Gila wild and scenic.

The Verde River Exchange has protected the water table in this vulnerable Gila tributary by establishing a water-offset program. Under the exchange, landowners can purchase water credits to offset their usage. These “water offset credits” are created when certified landowners voluntarily reduce their own usage. Several businesses in the Verde Valley have become important actors in reducing their water footprint through the exchange. 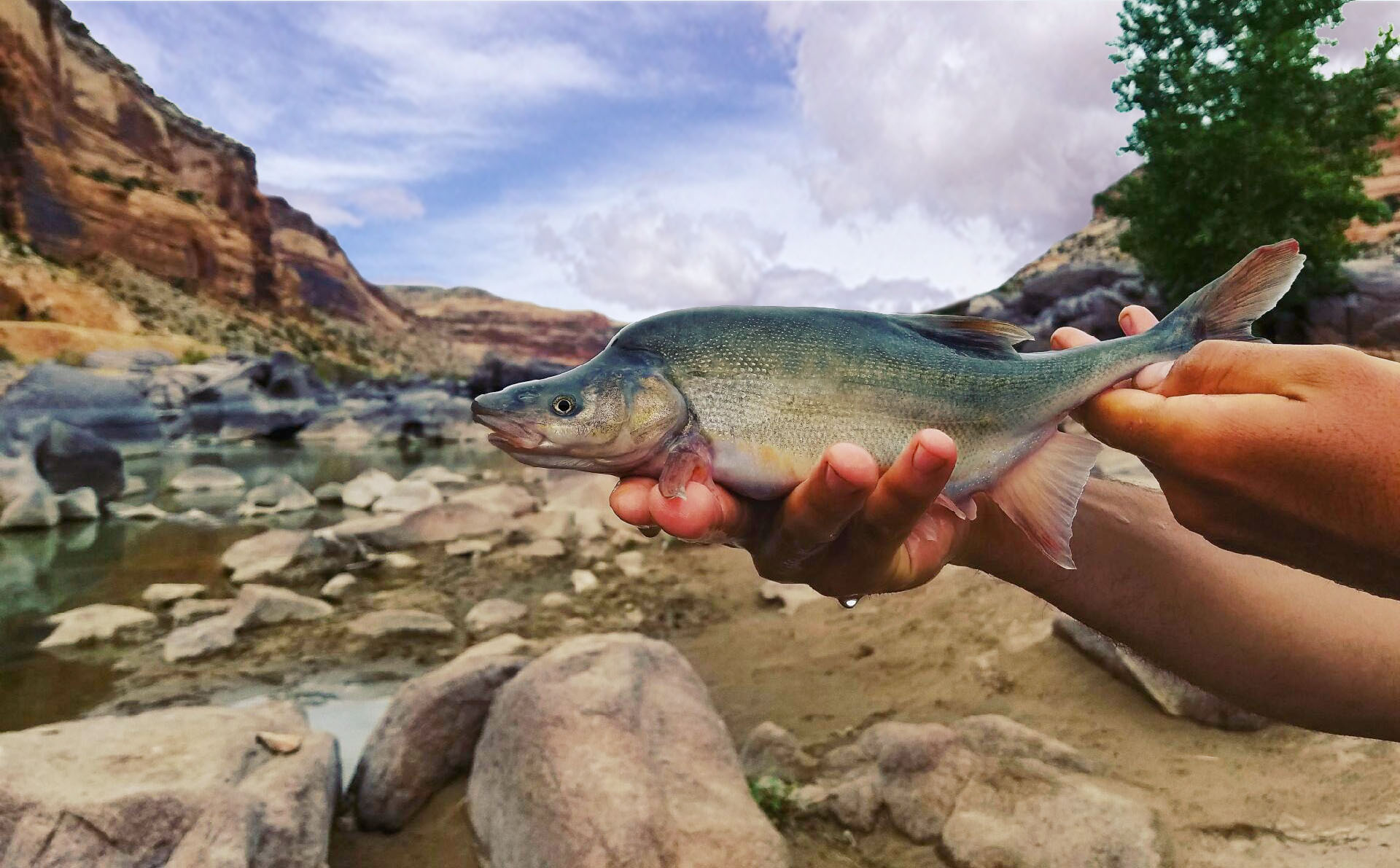 Partnerships also play an important role in conservation of water and biodiversity. The Cochise Conservation & Recharge Network takes an engineering approach to replenishing groundwater storage in the San Pedro River watershed by constructing a series of water recharge facilities along 25 miles of the San Pedro River. Collected stormwater is treated and the effluent re-injected underground to replenish the groundwater supply. In this way, water extracted from the San Pedro for human use in Cochise County can eventually make its way back into the river.

The City of Tucson’s Santa Cruz River Heritage Project releases purified wastewater into the Santa Cruz River, where it supports a newly established population of endangered Gila topminnow. Like the Cochise Network, this is an excellent example of large-scale water recycling.

Hope for the Future

We can certainly take strides to benefit endangered species within the constraints imposed by water use, especially by identifying successful techniques and applying them more widely. These include large seasonal releases of water from dams (“pulse flows”) to simulate natural high-level flood events, as has occasionally been done in the water-sapped lower Colorado River. Exotic fishes can be eliminated from select waters, such as stretches of streams, by controlled piscicide application and installation of fish barriers. Tamarisk can be killed, native cottonwoods and willows replanted, and cattle fenced out of riparian areas. Federal agencies have implemented such measures to reduce the effects of invasive species, grazing effects and habitat loss, with highly favorable results for native fishes. 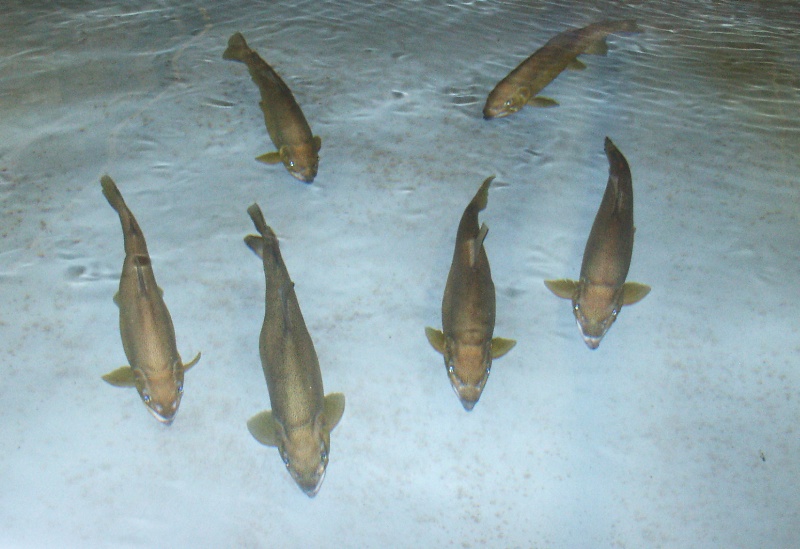 Fortunately, advocates have the remarkable resiliency of the river on our side, which evolved in a land of harsh droughts and raging floods. Despite a century of abuse, populations of most native species survive, waiting for better times. We hope that by advocating for the Gila, its tributaries and other southwestern rivers, more and more people will recognize the unique value they hold. With enough dedication and collective action, we can give the rivers—and the exceptional biodiversity they support—what they need to survive.

Reed Wester-Ebbinghaus is a student at Carleton College who interned this summer with Defenders' Southwest program.