A dark shadow emerges under the ocean waves, growing at an alarmingly fast pace as it approaches the surface. As the diamond-shaped body and thin tail begin to come into focus, suddenly, in a burst of water and flapping fins, a giant manta ray breaks through the surface!

This display is certainly awe-inspiring for any human spectators, as the giant manta ray (Manta birostris) is the largest ray species in the world – with a wingspan that averages 23 feet in length. Giant manta rays are extremely intelligent because of their large brain to body ratio, and they actually have the ability to recognize individual divers. Researchers can tell giant manta rays apart, too, because each one has a unique spot pattern on their underside. Matching their striking wingspan, these fish can weigh up to 5,300 pounds as adults. For reference, a Ford Expedition is about 5,500 pounds. 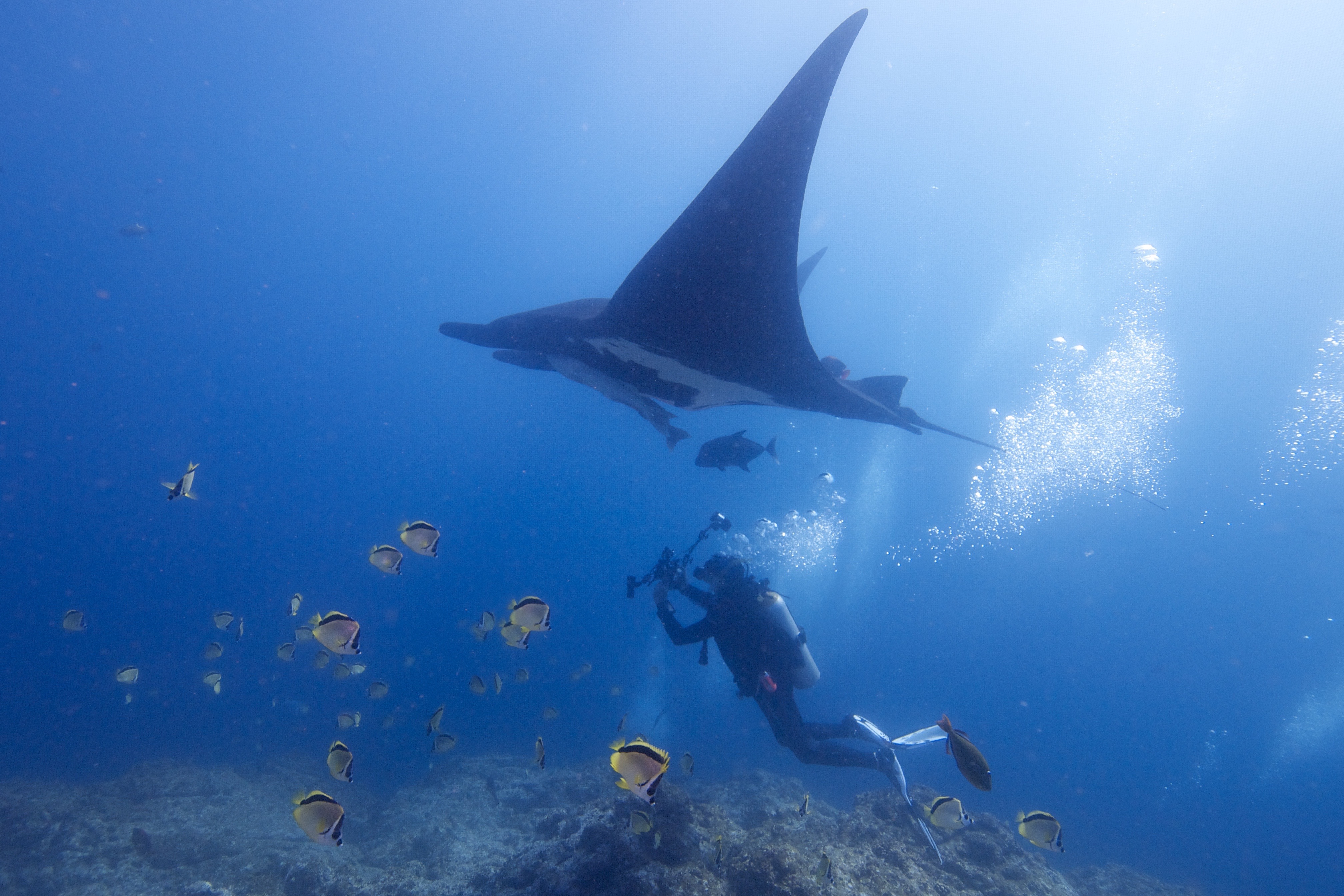 The giant manta ray’s massive size may seem frightening but as gentle filter feeders they pose little threat to us. In fact, we are the ones threatening them with climate change, unsustainable fishing for their gill plates and habitat loss. Increasing CO2 quantities and temperature levels are changing the chemistry of the ocean. As a result, the coral reef systems, where these rays gather to feast on masses of plankton and reproduce, are disappearing. False claims that giant manta ray gills plates detoxify human blood have created a booming market, where sellers can earn up to $300 a pound for gill plates. This commercial demand has combined with bycatch mortality from ocean fisheries. When industrial fishing boats drag nets behind them to indiscriminately capture fish, animals like giant manta rays can easily become entangled and die.

The potential for threats to cause cascading declines in the giant manta ray species is incredibly high - a single manta ray only gives birth to a one offspring every two to three years. With indications that population numbers were dwindling, combined with their low reproductive rate, Defenders of Wildlife submitted a petition in 2015 to the National Marine Fisheries Service to protect the giant manta ray under the Endangered Species Act (ESA). In a victory for the future of this species, the National Marine Fisheries Service announced their decision in 2018 to officially list the species as threatened.

That same year, National Oceanic and Atmospheric Administration (NOAA) developed a conservation guidance outline to help implement new management recommendations. This included investigating giant manta ray bycatch to design methods for safe release and supporting international efforts to identify areas of fisheries overlap. Researchers still have a lot to learn about how to best protect giant manta ray populations and habitat. What they do know is that ocean-based threats are proliferating at a dangerously fast rate and we need to protect the health of entire oceanic ecosystems to preserve reef habitats that the giant manta ray species depends on. 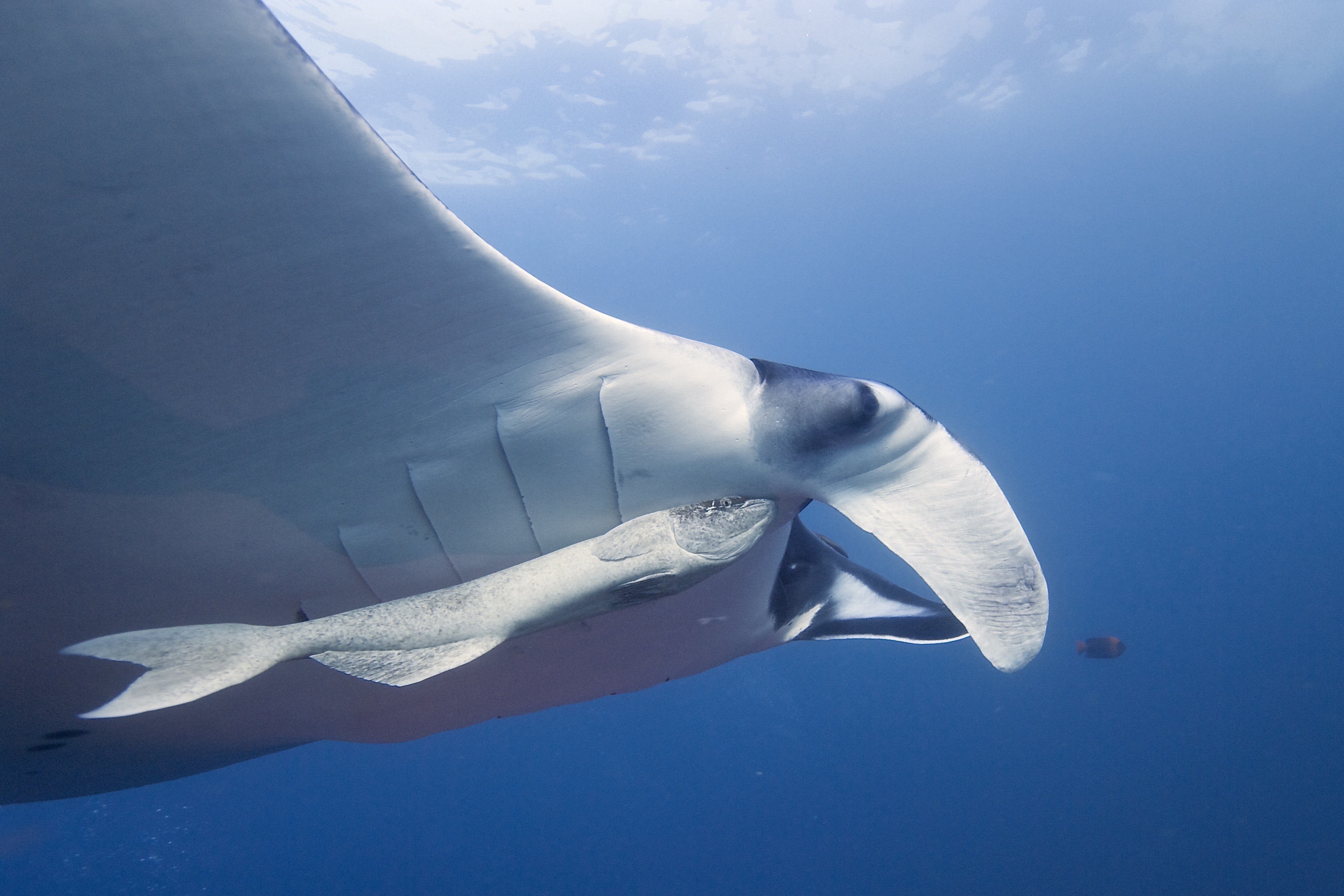 Divers, recreationists and tourists can all play a role in these recovery efforts. If you participate in giant manta ray tourism, please keep a safe distance from these animals to prevent disturbing them. Divers should always set an example for others by maintaining proper distance. Never touch a giant manta ray. Physical contact from divers disrupts their protective layer of mucous and can cause painful skin lesions - with repeated physical contact the extent of this skin damage can quickly worsen. Fishing gear should always be properly stored and boat speeds should be regulated to avoid wildlife collisions. For an activity closer to home, try to see if you can participate in ocean pollution clean-up events near you. Managing pollution will help prevent giant manta rays from accidentally ingesting microplastics.

Addressing the giant manta ray’s population threats is a continuous process but one in which we can all collectively make an impact. It was through a combination of legal petitioning, research and dedicated public support that Defenders was able to improve protection for this species. The challenges of saving wildlife can seem like an endless battle, but the story of the giant manta ray is part of what inspires us to keep fighting!