Defenders of Wildlife fights to stop trafficking of wild birds 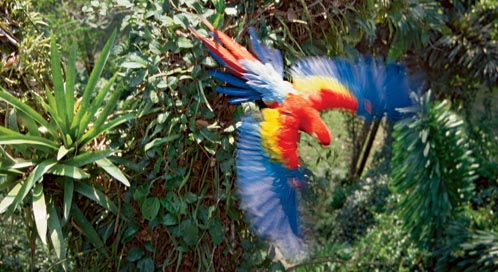 "No photos!" she yells in Spanish. "Don't take photos! Get out of here!" Arms flailing and menace in her eyes, the woman charges me from behind a pile of cages. I heard her husband say something about giving her a cuchillo—a knife.

I back away slowly.

We are in Xochimilco, a lively, outdoor market in Mexico City, where this woman is running a puesto, or stand for selling animals. She has stacks of animals in cages all around her, like walls of living creatures. In her cages are yellow-cheeked Amazons and orange-fronted parakeets—native Mexican parrots, caught in the wild. She doesn't want me to photograph them because they are illegal.

Juan Carlos Cantu, director of Defenders of Wildlife's Mexico office, has brought me here, along with Maria Elena Sanchez, president of Teyeliz, a Mexican conservation organization. For over a decade they have been fighting Mexico's illegal parrot trade. No one in the country knows more about it than these two—not the authorities, not even the traders. With support from Defenders of Wildlife, they have recently published the first comprehensive report on the problem, exposing the tricks of this trade. They brought me to Xochimilco to show me its dark and dirty secrets. "This woman knows what she's doing is illegal," Cantu says. "That's why she's angry. Sellers often get violent."

When Cantu and Sanchez began their research, they already knew the illegal trade was huge. "We knew because we could see them for sale in the markets, like these parrots here," says Cantu. "But no one knew how big. Now we have numbers—for the first time."

According to the study, between 65,000 and 78,500 parrots are illegally trapped in the wild in Mexico every year, and thousands are smuggled across the border into the United States.

In the coming days, I learn firsthand from Cantu and his team about what he calls "the devastating impacts of this trade on Mexico's prized parrots" and about what they are doing to shut it down.

"Anything," I think to myself the next day as we wander through the labyrinthine aisles of the Mercado Sonora, the largest market in Mexico City. "You can buy anything in this place." One whole section is dedicated to the sale of animals. This market is ground zero for illegal parrot sales in Mexico. It's also the distribution hub for these birds throughout the city and beyond.

We squeeze past canaries and quail, turtles and lizards, chickens and goats. "If you want a jaguar," Cantu says, "just put in an order. In a month, they'll have one for you. Whatever you want."

He warns me that it's dangerous here. So we browse like tourists, pretending to shop for parrots. With his pink cheeks and his fluent English, Cantu is often mistaken for a North American—a gringo—in these markets. It's useful cover for his research.

Parrots are easy to find. At one stand, we see the top three species in the trade on display: yellow-cheeked Amazons, white-fronted Amazons and orange-fronted parakeets. As we admire them, the seller pulls a battered cardboard box from behind a wall. Inside, cramped and barely able to stand, is a young yellow-cheeked Amazon.

After successfully working to ban parrot trafficking in Mexico, Defenders of Wildlife is now leading a nationwide public awareness campaign to inform the public of the threats parrots are facing as well as to get people to participate in saving the birds from extinction.

Through the message of "Don't Buy Wild Parrots," the campaign hopes to decrease the demand for wild parrots and promote bird-watching as an alternative to keeping parrots as pets.

I lift it from the box on my finger. Its body is a vibrant green with a brush of golden yellow on its face. Chicks are especially prized since they can be easily trained to speak and sing. The bird fixes me with its intelligent, beautiful eyes. It had been taken from its nest and stuffed in a box. I try to imagine what it's been through the last few months.

"The conditions for these birds are appalling," Cantu whispers in English. He explains that he has sent researchers into the field to talk directly with the trappers to get information. "The only ones who know what's really going on are the ones doing it," he says. "The authorities don't really know."

The illegal trade is the second-biggest threat facing parrots in the wild. Only habitat loss rates higher. But until now, few studies have effectively documented this threat. The numbers detailed in the report were a shock. As shocking is the discovery that Mexico is becoming a major consumer of wild-caught parrots. About 90 percent of illegally trapped Mexican parrots are destined for the Mexican market. Plus, over the past 10 years, illegal imports of exotic species of parrots—from South and Central America, for example—have exploded, with more than 100,000 parrots smuggled into Mexico.

This is a major change from the 1980s, when almost all Mexico's illegal trade in parrots was destined for the United States. Twenty years ago, as many as 150,000 parrots a year flowed across the border illegally. Stronger laws and more enforcement along the border after 9/11 has clamped down on the traffic. But smuggling still remains a problem: Today as many as 9,400 parrots a year are still smuggled into the United States. Eight of the top 10 species that cross the border are endangered in Mexico—and traffic in these species seems to be increasing. "The yellow-headed Amazon is endangered," Cantu says, "and its main market is the United States."

For the tens of thousands of birds captured every year, the trade is cruel and wasteful. Traffickers treat the birds not as living creatures but as merchandise. Cantu estimates that 75 percent of the birds captured illegally in Mexico die before they find a home—as many as 50,000 to 60,000 individual parrots each year. They can die from the stress of capture, whether taken from the nest or caught in nets, but most die during transport, when they are stuffed in boxes and cages without food and water.

The effects of the illegal trade on wild populations are equally disturbing. Parrots are the most endangered family of birds in the world. In Mexico, 20 of the 22 species of parrots are at risk. And the trade directly targets 19 of these endangered species.

"Several species have seen their populations crash to the point of being critically endangered due to the enormous illegal extraction from the wild," Cantu says. "If the trade is not stopped, several species will disappear from the wild in the next 10 to 20 years."

The seller offers me the yellow-cheeked Amazon on my finger for 2,300 pesos—about $230. Then he tells us he has a scarlet macaw and even monkeys.

The man wears a stack of 14 cages on his back, a towering column of wild-caught birds. Several of the caged birds—the slate-colored solitaires—are singing under the somber sky.

The man is a pajarero ambulante, a wandering birdman carrying a "birdpack" instead of a backpack. Two others each wear birdpacks of 11 full cages. In a separate cage on the ground, sits a caged red-lored parrot.

In Mexico, wandering birdmen are an institution. Though they are now illegal, they remain a fixture in markets and many neighborhoods, carrying their living wares straight to buyers.

I came to the Mercado Jamaica in the heart of Mexico City with Manuel Grosselet, a Frenchman who's been living here for over a decade. An ornithologist, Grosselet is the researcher who infiltrated the networks of trappers and sellers to get much of the on-the-ground information used in the study on the illegal trade. He also works with Profepa (Procuraduria Federal de Proteccion al Ambiente), the environmental police in Mexico. Looking the part of a tough, undercover cop, with his close-cropped hair and burly features, he has led raids on markets, including this one, arresting traffickers and seizing more than 200 illegal parrots. Today, Grosselet tells me to take pictures. He wants to report these birdmen, and use the photos as evidence. I convince the birdmen to let me photograph them, telling them they are colorful images of traditional Mexican culture.

Focusing on the "point of sale" is the traditional way of combating the illegal parrot trade in Mexico. Laws have become stricter and penalties tougher. Previously, authorities still authorized a certain number of captures a year. In October a ban on all trade in wild-caught birds went into effect. But the illegal trade still continues. According to the new report, Profepa and other authorities seize only about 2 percent of the total trade. That barely scratches the surface. According to Cantu, most of Mexico's 20,000 bird trappers report they've never seen an environmental authority.

Cantu and Sanchez want to change the focus. "We don't want to chase traffickers anymore," Sanchez says. "We want to change attitudes." That's something they are working on now—a public-awareness campaign that includes radio talk shows, posters, children's coloring books and teaching kits for educators—to alert people not to buy wild or captive-bred parrots.

Grosselet tells me he wants to do whatever he can to stop this trade and asks me to send him copies of my photos to give to the authorities so they can shut down these men at the market. I agree.

Finally, one of the birdmen has had enough. "Leave us alone," he grumbles. "You're driving away business."

He doesn't know it, but that is exactly the idea.

Our Lands, Our Wildlife

Manatees in the Midst

Are Florida's iconic and endangered marine mammals truly on the rebound?