The Return of Yellowstone’s Superstars 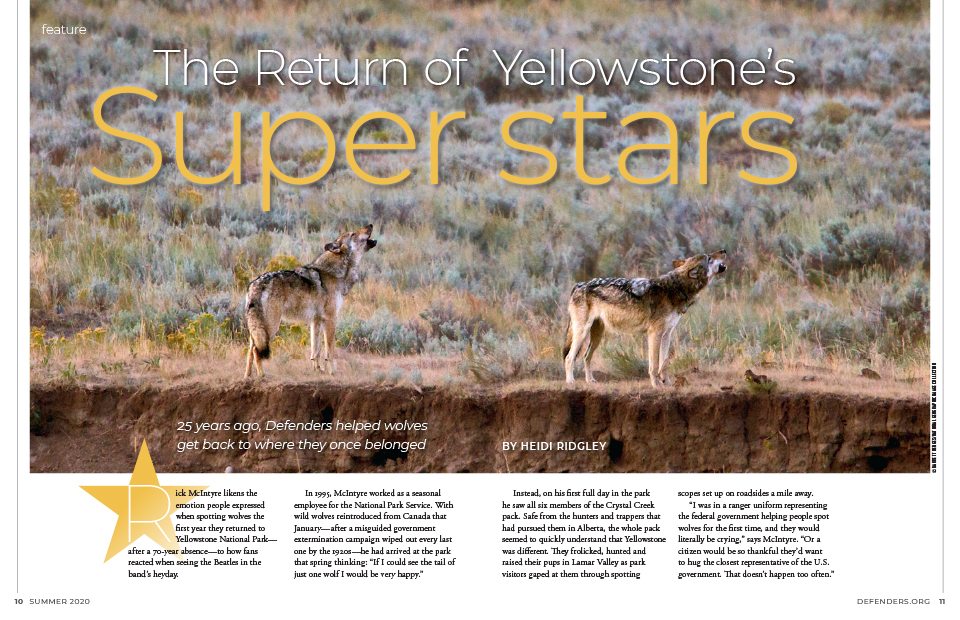 25 years ago, Defenders helped wolves get back to where they once belonged

Rick McIntyre likens the emotion people expressed when spotting wolves the first year they returned to Yellowstone National Park—after a 70-year absence—to how fans reacted when seeing the Beatles in the band’s heyday.

In 1995, McIntyre worked as a seasonal employee for the National Park Service. With wild wolves reintroduced from Canada that January—after a misguided government extermination campaign wiped out every last one by the 1920s—he had arrived at the park that spring thinking: “If I could see the tail of just one wolf I would be very happy.”

Instead, on his first full day in the park he saw all six members of the Crystal Creek pack. Safe from the hunters and trappers that had pursued them in Alberta, the whole pack seemed to quickly understand that Yellowstone was different. They frolicked, hunted and raised their pups in Lamar Valley as park visitors gaped at them through spotting scopes set up on roadsides a mile away.

“I was in a ranger uniform representing the federal government helping people spot wolves for the first time, and they would literally be crying,” says McIntyre. “Or a citizen would be so thankful they’d want to hug the closest representative of the U.S. government. That doesn’t happen too often.”

The wolves’ return is one of the most celebrated ecological experiments in history and an extraordinary conservation victory. It also spawned a tourism industry that brings wolf-watchers from all over the world and contributes $35 million a year to the region’s economy. But the success did not come without a struggle.

When Yellowstone became America’s first national park in 1872, people did not yet understand the role each species plays in ecosystem health. Early park rangers, sanctioned by the government, set out to kill every wolf they saw, and in 1926 they shot the last two—pups caught in steel jaw traps as they fed on a bison in Lamar Valley.

Two decades later, ecologist Aldo Leopold was the first to recommend reintroduction of wolves, recognizing their immense ecological value and his generation’s equally colossal mistake. “A thing is right when it tends to preserve the integrity, stability, and beauty of the biotic community,” he wrote in A Sand County Almanac in 1949. “It is wrong when it tends otherwise.”

As apex carnivores, wolves sit at the top of the food chain, affecting everything from elk to soil. Ecologically balanced grazing populations allow willow and aspen to grow and stabilize riverbanks, bringing dam-building beavers that create habitat for coldwater fish like cutthroat trout. Wolves also mean fewer coyotes to prey on pronghorn fawns, chipmunks, marmots and voles. In turn, raptors thrive. Even beetles partake in the bonanza provided by wolves. What they don’t finish nourishes the soil.

In the late 1960s, Defenders magazine began showcasing articles by wolf experts and field staff calling for wolf reintroduction in the park. In a 1986 interview featured in the magazine, renowned wolf authority L. David Mech described the Yellowstone ecosystem as “a place that literally begs to have wolves.”

In the following years, Defenders of Wildlife stepped up efforts on the wolf’s behalf, conducting public education campaigns to garner support for reintroduction, establishing a program to compensate ranchers for verified livestock losses to wolves, suing the U.S. Fish and Wildlife Service (FWS) to force reintroduction and fighting for federal funding.

When the federal government began seeking public comments, Doug Smith, Yellowstone biologist and head of the park’s wolf recovery project, recalls that regional public meetings had all the appearance of troops massing for battle. But from across the entire country comments poured in overwhelmingly in support of the wolf’s return.

And then it happened.

But at the last second, Wyoming Farm Bureau Federation lawyers—who had earlier delayed capture efforts in Canada—had obtained a stay from a federal appeals court to stop the release after the plane carrying the wolves from Canada was already in the air. The wild wolves, now on the ground after completing the final leg of their journey to Lamar Valley by mule-drawn sleigh and then hand-carried up a steep slope, remained confined in their transport crates. Pushing 30 hours since capture, Justice Department lawyers fought in a Denver court to free them.

When a judge finally relented and lifted the restraint, four veterinarians and biologists—Smith among them—rushed through the dark and snow to open the cages. To bond them to the area and ensure they did not hightail it back to Alberta, the wolves initially lived in chain-link pens about an acre in size, with armed rangers on guard because of death threats. After ten weeks they were set free.

In total, 66 wolves were released in Yellowstone and central Idaho in 1995 and 1996. With about 100 wolves in up to a dozen packs in Yellowstone today, wolves are well established in the park. But outside the park’s border, the struggle to gain greater public acceptance of wolves continues—despite a population of only about 2,000 in the Northern Rockies, compared to nearly 10,000 mountain lions, 100,000 black bears and hundreds of thousands of coyotes.

Since 2011, when Congress took Endangered Species Act (ESA) protections away from wolves in Idaho and Montana—the first-ever species delisting by Congress rather than by FWS biologists—and turned wolf management over to the states, more than 3,500 wolves have been killed. And where the ESA still protects wolves, repeated efforts to strip them of this protection continue, even though wolves still only occupy 10% of their historical range in the lower 48 states.

As wolves expand on their own into Washington, Oregon and California, Defenders is working to ensure they stay safe from conflicts with people through programs to promote coexistence tools among ranchers, such as using range riders, guard dogs and night pens, and rekindling the herd instincts in livestock, which make wolves less inclined to risk an attack.

Defenders also wants to see wolves successfully reintroduced in western Colorado—the largest remaining area of unoccupied wolf habitat—to complete wolf restoration across the entire Rocky Mountain range. And the fight continues to protect Mexican gray wolves in Arizona and New Mexico, where the federal government remains less understanding, having killed four wolves in April at the request of ranchers and stalling releases of captive-bred wolves that would bolster the wild population’s genetic diversity. Likewise, in the Southeast, the red wolf population is barely hanging on, with only 10 known in the wild. In the 1980s, the red wolf’s successful reintroduction had been the model for Yellowstone’s. But government inaction stalled the program following pressure led by a few vocal and persistent landowners, underscoring the fact that wolves will always need advocates.

“It’s time these amazing animals return to their rightful places across the country where suitable habitat still remains, for the good of all of us—humans and other species alike,” says Defenders’ President and CEO Jamie Rappaport Clark. “In the 1990s, we believed wolves were important to the broader biodiversity picture but didn’t have the evidence. Now, 25 years later we know with absolute certainty how valuable wolves are to ecosystem health, and we have the studies to prove it. Wolves have also showed the power of people to change, to grow and appreciate the value of all species, to right the wrongs of the past.”

Although prejudice against wolves remains strong in areas, and some states now managing wolves are more focused on wolf control than continued recovery, Clark says that Defenders will continue to provide the support, hard work and focused vision necessary to ensure that wolves, wherever possible, can get back to where they still belong.

Defenders’ editor Heidi Ridgley never saw the Beatles, but she did see Yellowstone’s superstars thanks to Rick McIntyre and his spotting scope. His latest book The Rise of Wolf 8: Witnessing the Triumph of Yellowstone’s Underdog chronicles the early years of the wolf reintroduction.

Yellowstone National Park created by an act of Congress requiring preservation of its “natural curiosities, or wonders” and prohibiting “wanton destruction” of animals.

The start of a war against predators begins on public lands in the West—including a wolf extirpation campaign in Yellowstone—after Congress appropriates funds for “destroying wolves, prairie dogs and other animals injurious to agriculture and animal husbandry.”

Rocky Mountain gray wolf listed as endangered. Congress enacts the Endangered Species Act, which enabled wolves to disperse on their own into northwest Montana from Canada by the 1980s.

Defenders advocates for wolf restoration to Yellowstone after the first gray wolf recovery plan is drafted but fails to recommend the park.

Wolf authority L. David Mech in a Defenders magazine interview advocates for Yellowstone wolf reintroduction, calling the ecosystem “a place that literally begs to have wolves.”

Revised recovery plan calls for wolf reintroduction in Yellowstone and central Idaho, along with nurturing a new population that immigrated from Canada into northwest Montana. Defenders begins compensating Montana ranchers for verified livestock losses to wolves.

The COVID-19 pandemic that continues to wreak havoc on human health and economies is proving that continued exploitation of animals in the wild harms more than their lives.

This Land is Their Land, Too

At a time when the federal government is rolling back public land protections at an alarming rate, a new study by Defenders of Wildlife and Tufts University finds those protections are crucial for vulnerable wildlife populations.

Calling for an End to Live Markets

With experts pointing to a live animal market in China as the suspected source of COVID-19, the illness that continues to infect millions of people worldwide, Defenders is joining the World Health Organization, United Nations Environment Programme and the World Organization for Animal Health to call for an end to illegal wildlife trade and live markets across the globe.