From lush tropical forests in Hawaii and the tundra of Alaska, to the northeastern forests of New England and the tropical waters of the Florida Keys, national wildlife refuges are a cornerstone of endangered species conservation, protecting our national, natural heritage—from the smallest butterflies to polar bears and everything in between.

Created in 1903 specifically to protect America’s wildlife in all its diversity—along with the habitat needed to ensure that species can survive and even thrive across our great country, the National Wildlife Refuge System includes some 95 million acres of land and 760 million acres of submerged lands and waters.

In addition to providing crucial and valuable habitat for wildlife, these wild spaces also provide innumerable ecosystem services, ranging from water filtration and purification to habitat buffers that provide protection during hurricanes and other intense storms, to fish nurseries that help to support commercial and recreational fisheries. Nature tourism also carries critical revenue into local economies. In fact, every state and U.S. territory has at least one wildlife refuge, and most major U.S. cities are within an hour’s drive of one.

Listed below are some of our country’s most unique wildlife refuges—crucial places that Defenders fights hard to keep protected for the sake of wildlife and future generations.

In far northeast Alaska, Arctic National Wildlife Refuge protects some of the most untouched habitat left in North America, land that safeguards polar bears, grizzly bears, moose, caribou, wolves, lynx, wolverines, migratory birds and more. As climate change ramps up, this refuge will be more and more critical for polar bears as they lose ground and have nowhere left to roam. Protecting the refuge against oil drilling has been ongoing for decades and the fight continues to this day.

The smallest of America’s refuges, Izembek nevertheless protects essential habitat in Alaska’s Aleutian Island chain. In fact, it hosts the world’s entire population of Pacific black brant, as well as tens of thousands of other migratory sea birds, waterfowl and shorebirds. It contains a wetland globally recognized for its importance to wildlife and one of the largest eelgrass beds in the world, where young fish and invertebrates forage and find shelter. A controversial proposed road through the refuge, which Defenders fought against, was recently rejected by the Alaska courts. But the refuge still faces threats and is an ideal place to expand conservation land.

Defenders considers Buenos Aries National Wildlife Refuge one of the most endangered refuges in the United States. Its semidesert grasslands lie on the U.S.-Mexico border in Arizona, and because U.S. immigration policy has channeled its resources into preventing people crossing in urban areas, they tend to cross through wild habitats, such as Buenos Aires and Cabeza Prieta national wildlife refuges. The unfortunate result is damage to trails, habitat and wildlife, while refuge managers have to deal with increased crime. Expanding the refuge and providing more funds to protect wildlife and habitat within the refuge is essential.

Featuring 860,000 acres of Yuma desert habitat in southwestern Arizona west of Tucson, Cabeza Prieta National Wildlife Refuge protects key habitat for desert bighorn sheep and provides a home to more than 275 species of animals and 400 species of plants. Although part of the Sonoran Desert with its famous saguaro cacti, Yuma Desert sits at a slightly lower elevation. Much land within this incredible refuge is designated as a Wilderness Area. But, like other refuges along the border, this national wildlife refuge is on the front lines of the immigration battle that tears up land and makes it unsafe for wildlife and the people forced to pass through it. 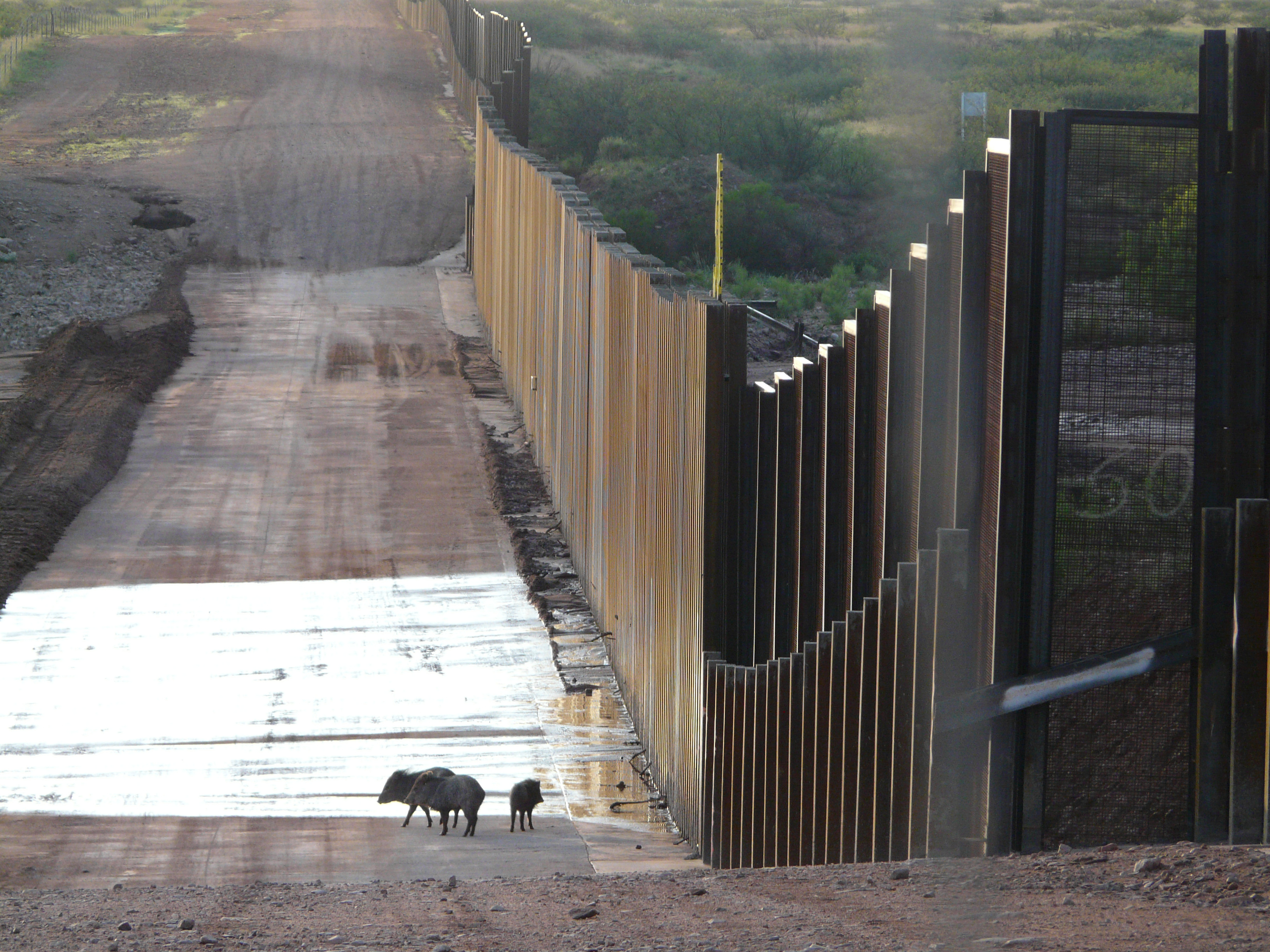 Also located on the U.S.-Mexico border in Arizona, San Bernardino was created to preserve habitat in the Rio Yaqui watershed, especially for the endangered native fishes found nowhere else in the world, including the endangered Yaqui longfin dace, Yaqui topminnow, Yaqui catfish and Mexican stoneroller. Not only did the Trump border wall cut through the habitat that allowed jaguar to cross between U.S. and Mexican habitat, but massive amounts of water pumped from the underground aquifers also damaged natural water flow in the region, potentially affecting these endangered fish species and the entire riverine ecosystem.

Located at the southernmost tip of Texas bordering Mexico, the Lower Rio Grande Valley National Wildlife Refuge protects over 90,000 acres of highly biodiverse habitat. Taumalipan thornscrub habitat in the refuge is essential for the future expansion of endangered ocelots. The refuge contains several other habitat types, ranging from a hypersaline lake to the riverine habitat of the Rio Grande, all in all, hosting more than 1,200 native plants, 700 vertebrates and 300 butterfly species. The refuge is considered one of the “birdiest” habitats in the world and is a stop on the Great Texas Coastal Birding Trail.

Protecting riverine islands and sloughs within the Upper Mississippi River in four states—Illinois, Iowa, Minnesota and Wisconsin—this national wildlife refuge is a great place for birding and canoeing. The northern portion, called the Driftless Region, remained ice-free in the most recent Ice Age. Full of steep carved valleys, spring-fed waterfalls and cold-water trout streams, this area is an important “refugia” for biodiversity. Lying on the Mississippi Flyway, the refuge provides a stop for many migratory birds.

Horseshoe crabs nest en masse on the islands of Cape Romain National Wildlife Refuge every summer, and their eggs are crucial for federally threatened red knots, which fly from the tip of Terra del Fuego in South America north to the Arctic, as well as other migratory shorebirds. Located offshore from South Carolina, Cape Romain has been under threat because of illegal crab harvesting and was the center of a recent Defenders lawsuit that pressured the U.S. Fish and Wildlife Service to comply with the law and protect the ancient species.

In the heart of Okefenokee Swamp at the northern tip of Florida and southern Georgia, this vast, sprawling bog is designated a Ramsar Wetland of International Importance. Lined with ancient bald cypress trees and world-renowned for its amphibian biodiversity, the refuge also provides habitat for threatened Florida black bear, as well as gopher tortoises, American alligators, migratory and resident birds, and more. The Okefenokee swamp faces threats from a proposed titanium mine nearby, which Defenders is working to prevent because it could affect the swamp’s hydrology and threaten its wildlife.

The Laguna Atascosa National Wildlife Refuge provides key habitat for America’s remaining critically endangered ocelots. Two distinct ocelot populations in Texas, one in the refuge, are separated by inhospitable land heavy with roadways. Vehicle strikes kill more Texas ocelots than any other cause. Expanding the refuge so that the two populations can connect and preserving existing patches of Taumalipan thornscrub is essential for the cats’ long-term survival. Proposed liquid natural gas terminals, which Defenders if fighting to prevent, and other coastal development are active threats to this refuge.

In February 2021, two California Congressmen, Ken Calvert and Mark Takano, introduced bipartisan legislation to create a new 500,000-acre refuge in Western Riverside County in southern California. Part of the land would come from the Cleveland and San Bernardino National Forest, and another 150,000 acres will be acquired. The new refuge will encompass desert mountain ecosystems, including coastal sagebrush and chamise chaparral, with more than 33 endangered or threatened species, including burrowing owls and Stephen’s kangaroo rat, along with black bear and mountain lions. Creating this new refuge fits into California’s and the United States’ commitment to the international 30x30 plan that aims to protect 30 percent of the world’s habitat by 2030.

While the refuge system has proved an enormous success, wildlife populations are losing ground as human populations and development expand. Defenders continues to fight to protect these refuges and the National Wildlife Refuge System itself against threats, including oil drilling, mining and urbanization. We also work with Congress to ensure crucial funding is made available to protect, strengthen and grow this incredible network of conservation lands. More land preserved in these key refuges across the country will conserve and restore biodiversity, help wildlife adapt to climate change impacts, ensure we reach the 30x30 goal of protecting 30 percent of the world’s habitat by 2030, and increase equitable access to nature for all.

Please support our work to protect these places of refuge for diverse wildlife throughout America for generations to come by becoming a Defender today.