The American beaver (Castor canadensis) is a native Coloradan that used to be found in waterways around our state. Through building dams and lodges, beavers are considered expert ecosystem engineers because they have a profound influence on the form and function of landscapes. The plants and animals of Colorado coevolved with beaver and depend on the diversity of aquatic habitats they provide. Waterways with beavers present have rich, complex riparian areas with expansive wetlands providing benefits for wildlife as well as people. Wetlands comprise less than two percent of Colorado’s landscape but provide benefits to over 75% of the species in the state, including several at-risk or declining species. Beaver ponds and wetlands are biodiversity hotspots hosting many species including freshwater fish, aquatic mammals, waterfowl, migratory birds, shorebirds, amphibians, reptiles, plants and invertebrates.

Through their activities, beaver benefit humans by providing services necessary to our society. These benefits include moderation of extreme flow events that can reduce flood risks to downstream communities, greenhouse gas sequestration, nutrient cycling, and recreational opportunities. But perhaps most important benefit in our arid state is their ability to improve resiliency of water supplies and water quality for humans and the environment during times of drought and climate change.

Please use the resources below to learn more and get involved.

Want to stay up to date on all things beaver happening here in Colorado, including our Newsletter and info about upcoming meetings? Join our Google Group HERE, or send an email to cobeaverwg@gmail.com and ask to join the Group. Please note that this link is external to Defenders’ website, which hosts this Colorado Beaver Working Group page.

Beaver are a keystone species, meaning they play a critical role in holding together entire ecosystems. Beaver are also considered ecosystem engineers because through building dams they raise water levels, slow water speed, and change water direction. In doing so, they can increase a wetland’s area, species diversity, and water quality, as well as maintain more stable water temperatures. In beaver ponds, freshwater fish, migratory birds, amphibians, turtles and other wetland species thrive. Humans living near beaver benefit from cleaner water, and more abundant water, especially later in the summer and in the fall.

Beavers once lived in almost every perennial (year-round) stream in North America and numbered in the many millions. But as demand for their fur skyrocketed between American colonization and the early 20th century, they were trapped almost to extinction, with their disappearance dramatically altering the landscape. Despite reintroductions and natural expansion, beavers have yet to return to many places where they used to live, and many areas could use more beavers to restore crucial wetland habitat and water resources.

Beavers are the largest rodent native to North America, averaging about 3-4 feet in length and 45-60 pounds as adults. They live 10-12 years in the wild, and up to 30 years in captivity.

Beavers are very social and mate for life, having between 1-6 kits (baby beaver) every year. Kits are born in the early spring and weigh about 1 pound at birth. The kits stay with their extended family and learn from their parents and siblings for 1-2 years before they leave to find their own habitat and start their own family.

Beavers build dams primarily for their own safety. They are very agile in the water, but very awkward on land. So building a dam creates deeper water they can swim in, and also increases the overall amount of water in the area which keeps them safe while foraging for food. Beaver are vegetarian, eating leaves, the inner bark of riparian trees such as willow, aspen, and cottonwood, and herbaceous vegetation such as grasses and sedges. In the fall beaver create a food cache of branches that they store in the bottom on their pond, and they will feed on this throughout the winter, only leaving the lodge/pond if they run out of food.

Beaver live mostly in lodges, either in the middle of their pond, or attached to the bank of their pond/stream. Beaver access their homes from underwater, protecting themselves from predator and each lodge has multiple entrances and exits. In larger streams where beaver don’t need to build dams to create deep water, they might also live in bank dens which are tunnels in the side of the stream.

To learn more about beaver and all the benefits they bring to humans and wildlife check out these resources!

Coexistence: Learning To Live With Beaver

Sometimes, a beaver’s actions come in conflict with human use of a landscape. Fortunately, there are simple solutions such as tree fencing and flow devices designed to mitigate human-beaver conflicts. Education and outreach help promote positive attitudes about beaver by recognizing the myriad of benefits beaver have for water quality, water quantity, and habitat for other species such as fish, amphibians, and water-dependent birds and mammals. For more information check out the quick-reference table of common conflict and solutions below, and the links to people and organizations who have the knowledge and experience to help you out.

In some cases, when coexistence tools such as pond leveling devices, culvert protection fences, and tree-fencing cannot solve human-beaver conflicts, beavers can often be relocated to lands where they will not be in conflict with humans and can provide all the benefits of their ecosystem engineering. The relocation process is tricky, complicated, and requires coordination and permits from Colorado Parks and Wildlife, but there are experts who specialize in moving beaver. For more information reach out to your local Colorado Parks and Wildlife office, and also use the links to learn more about the process.

Why not let nature do the work? That’s the idea behind process-based restoration: letting the natural processes that shape and modify aquatic systems have the room and opportunity to restore and create natural, self-sustaining ecosystems, often through the use of beaver and beaver mimicry type structures.

Since beaver are ecosystem engineers, there is a lot of effort to promote or regulate their activities. Many organizations work at the Policy level on beaver, trying to find a balance between healthy beaver influenced ecosystems and human use of the landscape.

There are great mapping resources out there to get to know the landscape and setting for beaver in Colorado, from wetlands to waters, to on-the-ground restoration projects.

Ranchers, farmers, and other large landowners can provide a unique opportunity to support wildlife on their lands, including beaver. Here are several examples of landowners working with beaver for the benefit of wildlife and humans alike.

There are lots of resources out there to support private landowners who want to take an active role in wildlife habitat, including beaver. Federal and state programs have annual funding cycles, and most watersheds and local municipalities also offer various funding opportunities. Be sure to check with your local groups. 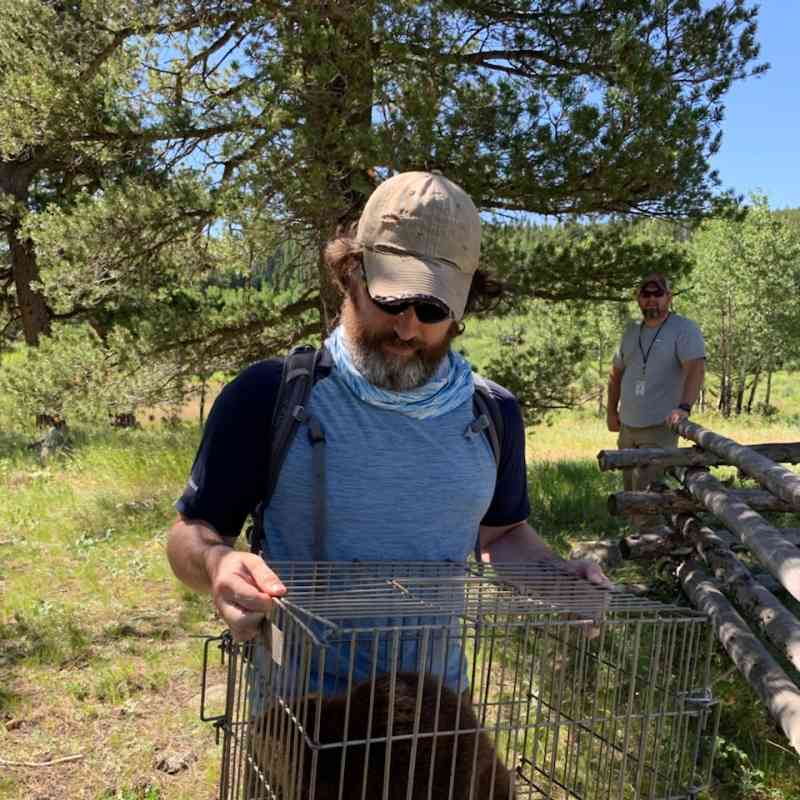 A beaver being carried into its new home after being live-trapped. 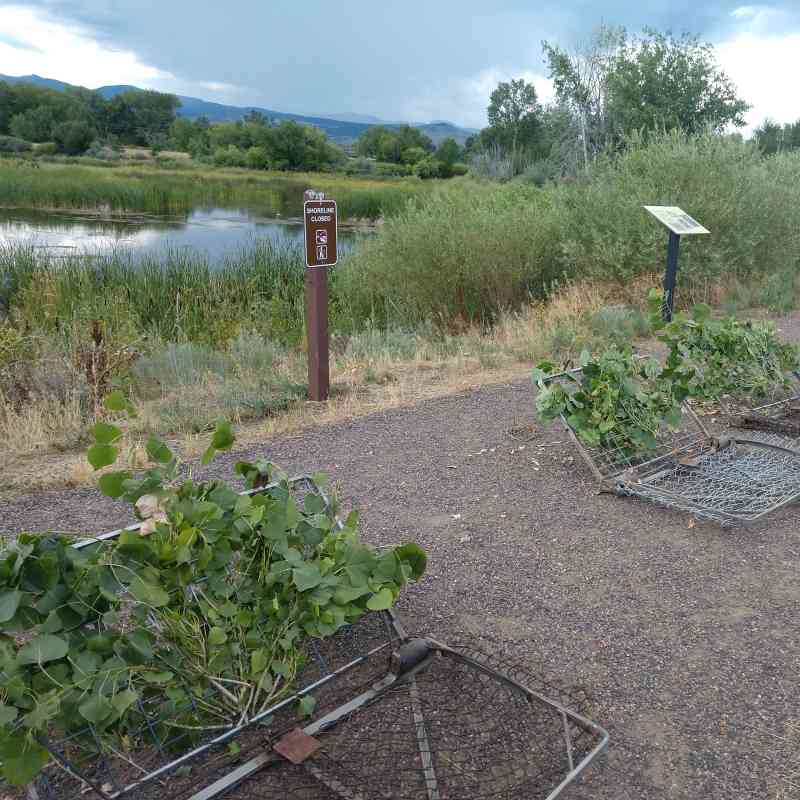 Hancock live-traps ready to relocate some beaver. The traps fold up like a mesh suitcase, catching the beaver but keeping them safe. 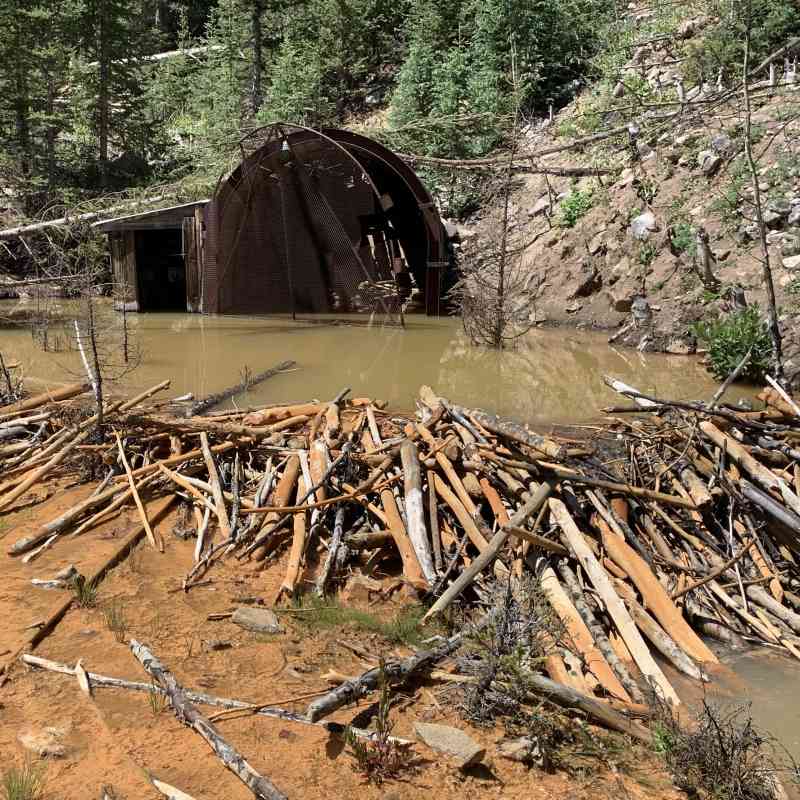 Beaver dam on mine drainage from an abandoned mine near Silverton, CO. 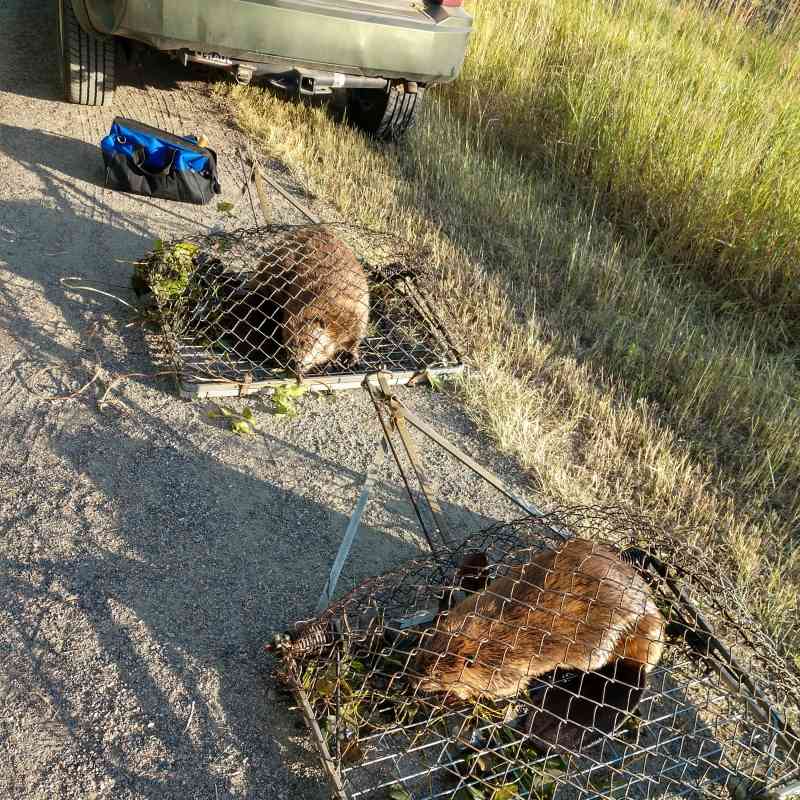 Beaver successfully live-trapped and ready to be relocated. 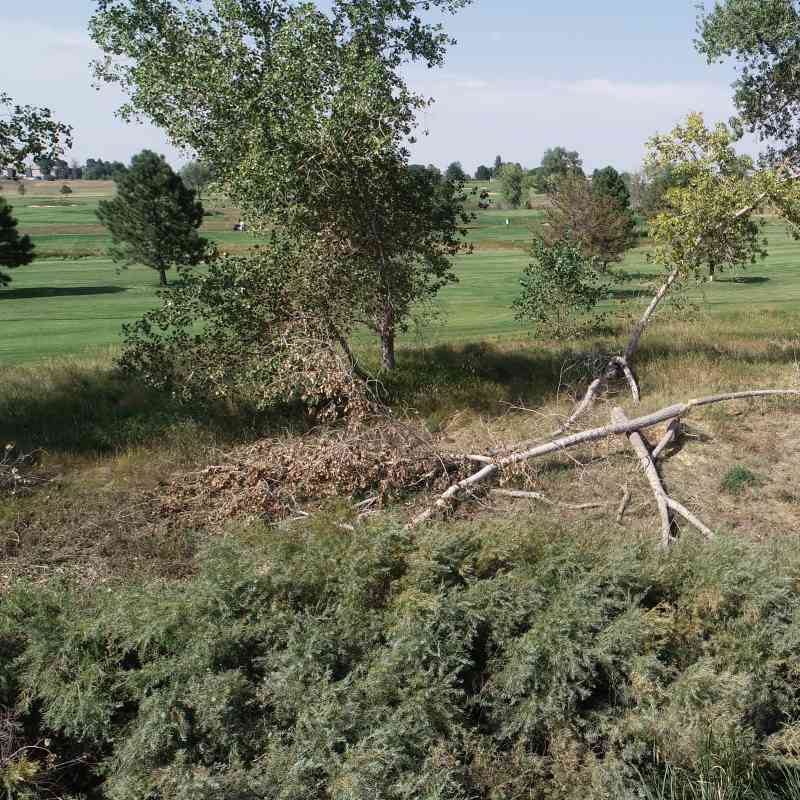 Beaver felling trees at a local golf course, a perfect example of where simple coexistence efforts like tree fencing can reduce beaver-human conflicts. 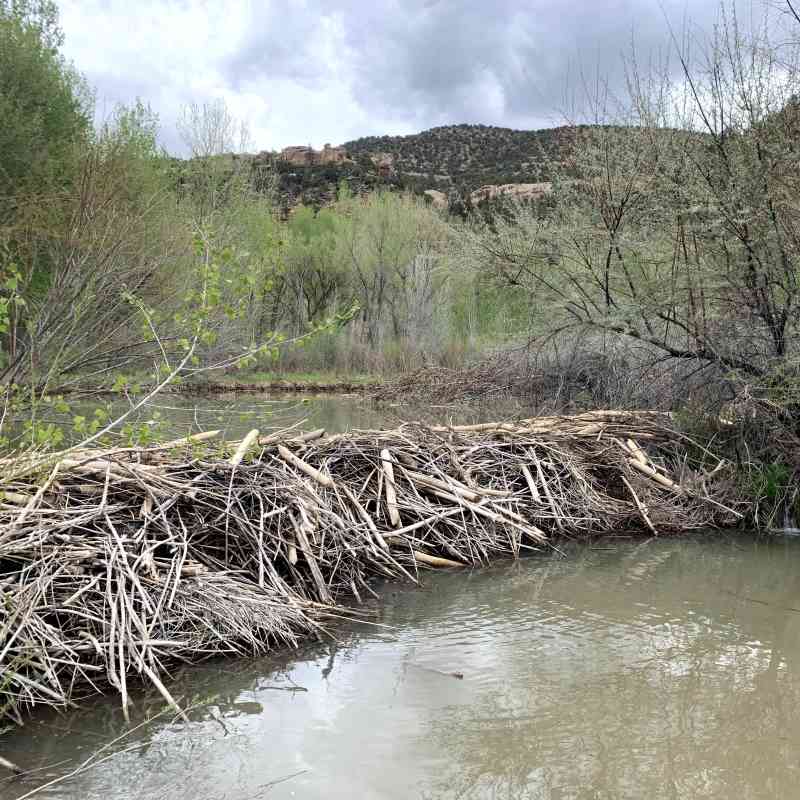 Beaver dam on the Ute Mountain Ute Reservation in the Tribal Park on the Mancos River, being protected to maintain the riparian system for drought resiliency and changes in water availability.