Shrimping likely cause of large number of deaths 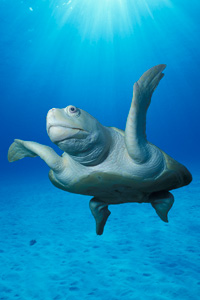 The dead and stranded sea turtles began washing up on Gulf Coast beaches last year. There were so many that the National Marine Fisheries Service investigated, finding both the BP Gulf oil disaster and shrimp trawling were likely to blame. In May, when the deaths continued and the government’s investigation stalled, Defenders and other conservation groups alerted the fisheries service of their intent to sue if more wasn’t done to protect these endangered species.

Scientists are still studying the wildlife impacts of the 200 million gallons or more of oil spewed into the Gulf last year—and the nearly 2 million gallons of dispersants dumped on top of it. But when many of the dead turtles turned up with shrimp in their stomachs, concern over shrimp trawling grew. Experts say that the presence of shrimp, which is not normally part of a sea turtle’s diet, provides strong evidence that these turtles died after being submerged too long in shrimp gear.

“To allow critically endangered sea turtles—which survived the biggest environmental disaster this country has ever faced—to now drown at unprecedented rates in fishing gear is tragic and unacceptable,” says Sierra Weaver, Defenders’ attorney. “The government should be moving quickly to protect the turtles that survived.”

The vast majority of washed ashore turtles are Kemp’s ridleys, a species that breeds and nests exclusively within the Gulf of Mexico and that was rescued from extinction after the nesting population dropped to fewer than 400 nesting females in the early 1980s. 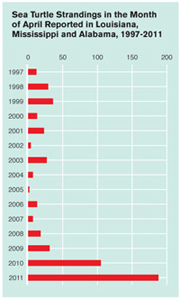 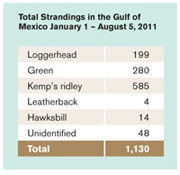 Loggerhead, hawksbill, leatherback and green sea turtles also live in the Gulf—and all are so imperiled they are protected under the federal Endangered Species Act. Scientists have found that the dead sea turtles that wash ashore represent only about 5 percent of the total number that die. An unknown number will never be accounted for because wind and currents carry carcasses out to sea, where they sink or are eaten by scavengers. That’s why spikes in standings usually indicate a dire situation.

Defenders is calling on the Fisheries Service to expand requirements for turtle excluder devices, called TEDs, throughout the shrimp fishery, to enforce the TED rules that are already in place, and to explore closing turtle hotspots to shrimp trawling altogether.

TEDs, federally mandated for most offshore trawlers since 1987 and for most state trawlers since 1992, should release 97 percent of the turtles caught through an escape hatch. But not all shrimp vessels are required to use them. And enforcement of the requirement is poor at best. Louisiana, for example, prohibits  officials from enforcing federal TED requirements. “We know we’re not getting the protections turtles need in the shrimp fishery right now,” says Weaver. “The fact that only part of the fishery is required to use TEDs, combined with a serious lack of compliance and lack of law enforcement, means these turtles hardly have a fighting chance.”

The fisheries service responded to Defenders’ concerns this summer by strengthening federal enforcement efforts and beginning to study expanding TED requirements. But Defenders is still concerned that these efforts will be too little too late. “The agency has known it has a problem for quite some time now,” says Weaver. “Its answer has been to avoid action by continuing to study the problem. We know now that turtles need help. There simply is no justification for further delay.”

No Home on the Range

America's only true bison herd needs more room to roam. Will they find it in Montana?

Too Hot to Trot

Relocation redux; Fast and furious fungus; To spot an ocelot

Politicking Instead of Protecting Wildlife