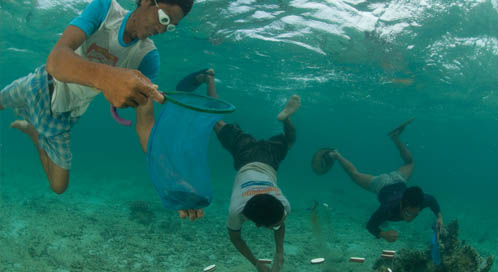 Having colorful little fish darting around a home aquarium appears harmless enough, but the hobby can also have hidden environmental costs upstream.

With 98 percent of saltwater aquarium fish, corals and invertebrates collected from the world’s oceans—and U.S. buyers accounting for more than half the trade—the pastime is having an impact on coral reef ecosystems, which are already hit hard by ocean acidification linked to global warming, nutrient pollution and overfishing.

Most of the world’s saltwater “ornamental” organisms come from Southeast Asia, where some collectors use illegal, unethical and harmful methods. This includes dumping cyanide into the water to stun fish and make collecting easier. Chemicals not only weaken the fish, which means fewer will survive transport and spur more harvesting, but they also damage the corals and other organisms living on reefs. Some collectors even crush the slow-growing corals to capture hiding fish, destroying habitat and degrading the entire ecosystem.

To help address this worldwide problem, Defenders is collaborating with Petco, the second-largest pet supply company in the country and the largest retailer of saltwater fish, to set up strict standards for responsible collection, transportation and handling of saltwater fish and corals. Defenders is also helping to create a list of species that should not be collected from the oceans and is providing advice to Petco on its program to boost the supply of fish that are tank-raised—known  as “aquacultured.”

“Petco’s size within this trade enables it to have a positive influence for conservation,” says Dan Thornhill, Defenders’ marine expert. The hope is to encourage research on breeding and raising aquarium-trade species in tanks.

“Here at Petco, 23 percent of our saltwater fish and coral are aquacultured, and that number is growing,” says Todd Gwynn, aquatic life expert for the company. “The goal of our program is to hold collectors and vendors to a new and higher set of standards and, with Defenders’ help, to educate customers about how choosing sustainably raised marine life can help coral reefs.”

Currently, the aquarium industry sells more than 1,800 species of reef fishes. Some of the species most affected by overcollection include Banggai cardinalfish, mandarinfish, seahorses, giant clams and select corals and anemones.

“With more than a million U.S. households keeping saltwater aquariums, our actions have a big impact on what happens in these coral reef ecosystems,” says Defenders’ Thornhill. “As the world’s largest importer of ornamental coral reef wildlife, this country has the opportunity—and the responsibility—to improve the conditions of reefs throughout the world.”

Are you committed to protecting the world's coral reefs? Take the pledge to "Get Aquacultured!"