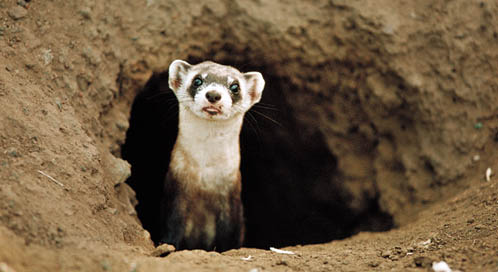 Solitary andnocturnal, the black-footed ferret, with its characteristic black mask and black-tipped tail, rarely pops its head from underground, preferring to spend most of its time hunting and living in prairie dog burrows.

Members of the weasel family, black-footed ferrets once numbered in the tens of thousands on prairie dog colonies across the Great Plains and valleys of the Mountain States—from southern Canada to northern Mexico.

But habitat destruction from plowing the land for crops, exotic diseases and widespread poisoning of its prairie dog prey almost caused North America’s only native ferret species to disappear for good.

In fact, biologists concluded that the species went extinct in the 1970s. That is, until Shep—a Wyoming rancher’s dog—deposited one on his owner’s porch one morning in 1981.

This last-known population of about 130 individuals suffered a disease outbreak soon after, prompting federal biologists to capture the 18 that survived for a captive-breeding program.

Today, this endangered species still faces an uncertain future from dwindling prairie dog habitat and persistent poisoning of prairie dogs so livestock can eat the grasses instead.

Yet thanks in part to a wayward dog, there is renewed hope that this masked mustelid will not be lost forever in the grasslands of time.