Named for a tiny, hidden red brush stroke that resembles a ribbon—or cockade—on a hat, the red-cockaded woodpecker hangs on amid what remains of the once-vast, old-growth longleaf, loblolly and other pine stands of the Southeast. Here, they drum tree trunks to attract mates and define territories. They use their jackhammer-like beak to extract ants, spiders and bark beetles, and hollow out nesting cavities. 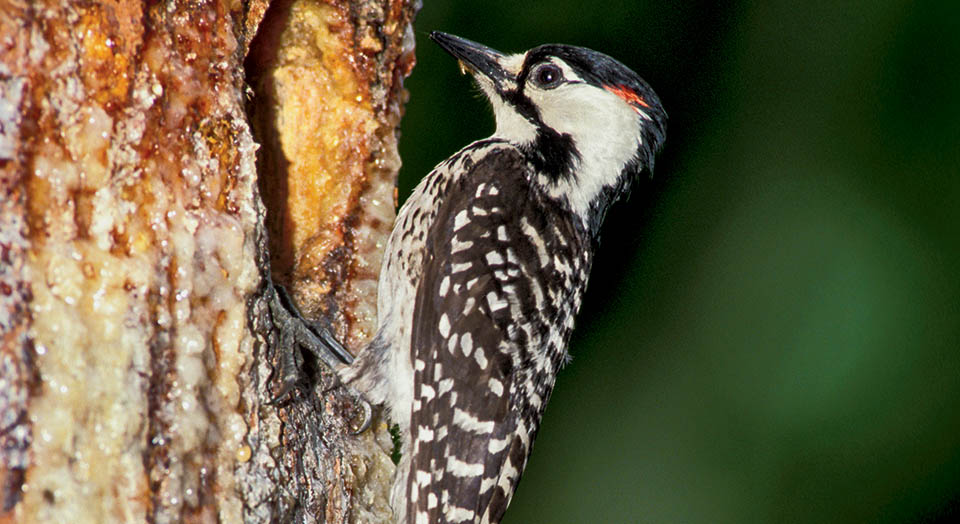 Within their typically 10-acre territory, a lifelong breeding pair and several helpers—usually males born in previous years—work together to excavate a few roosting cavities. Digging out just one home can take a couple of years or more.

Because woodpeckers and the timber industry favor large, older pines over smaller ones, logging decimated their population in the last century. These nonmigratory birds once lived in large numbers from Texas to Maryland, but today only about 60 fragmented populations exist. Protected under the Endangered Species Act since 1973, their numbers are slowly improving thanks to federal lands protection and other conservation efforts. In 2000, their population was estimated at 11,000 birds. Today it is more than 15,000 in 11 states.

Safeguarding the places red-cockaded woodpeckers live also helps other imperiled species, including the gopher tortoise, eastern indigo snake and flatwoods salamander. Ducks, owls, flycatchers and many more birds, flying squirrels and even frogs and lizards that cannot excavate their own tree cavities also rely on the hard work of these woodpeckers—adding another feather to their cap.

Defenders is one of the leading advocates for land acquisitions and easements to conserve and restore longleaf pine habitat. We work in the Southeast to prevent habitat fragmentation by fighting for sound transportation and land- use programs. We work with many state and federal agencies to strengthen incentives for private landowners to protect, manage and restore longleaf pine habitat, and we are helping the military conserve areas around Eglin Air Force Base, Avon Park Bombing Range and Camp Blanding in Florida and several bases in the Carolinas that have important red-cockaded woodpecker populations and habitat.

Find out more at defenders.org/southeast.