An endangered border species already on the brink of extinction faces even more uncertainty now that the federal government’s long-overdue draft recovery plan ignores the recommendations of some leading wolf biologists. 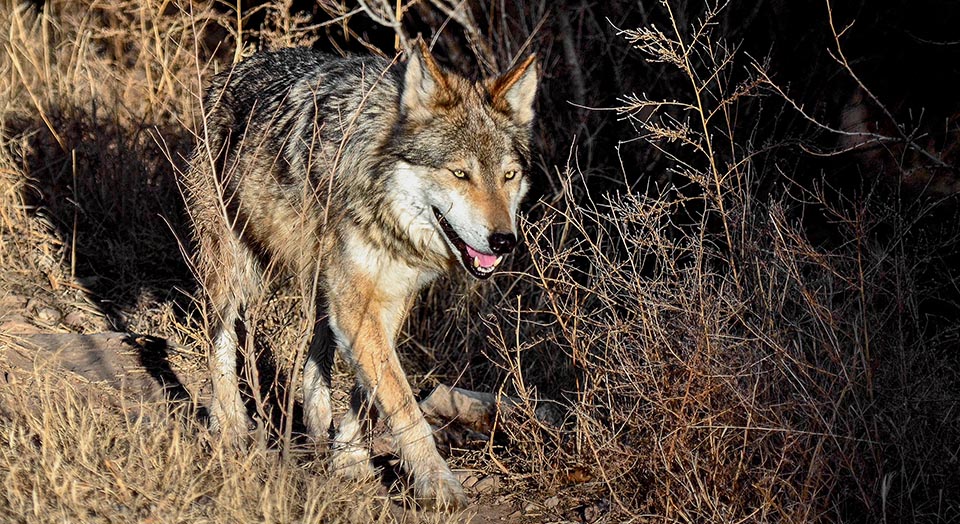 Rather than allowing wolves to move freely into 19 million acres of suitable habitat in northern Arizona, New Mexico, Utah and Colorado, the draft plan released by the U.S. Fish and Wildlife Service (FWS) in June continues to restrict these wolves within invisible boundaries in eastern Arizona and western New Mexico. If they set up territories outside of these lines—necessary for their recovery—they are immediately trapped and moved back even though much of these lands are livestock-free with abundant prey and low road-density.

“To make matters worse, President Trump’s plans to build an impenetrable border wall with Mexico will only worsen chances for the wolves’ recovery,” says Bryan Bird, Defenders’ Southwest program director. “The wolves would be boxed in, incapable of beating the clock on extinction.”

Scientists believe that these wolves—nearly shot and trapped out of existence by the late 1970s—require a minimum of three linked populations in different areas to survive disease outbreaks, to prevent against inbreeding which weakens overall genetic health and can result in smaller litters and lower pup survival, and to allow for adequate dispersal. The best habitats for new populations are in the vast forested areas surrounding the Grand Canyon in northern Arizona and southern Utah and in northern New Mexico and southern Colorado, areas where the draft plan will not allow wolves. It also arbitrarily caps the wolf population at 320 individuals—a number far short of the 750 scientists recommend to ensure their future. Currently, only about 100 survive in the wild, making it one of the rarest land mammals in the world.

Exacerbating the wolves’ struggle are illegal shootings. Since the 1998 reintroduction, approximately 135 Mexican gray wolves have been killed.

“People don’t realize the wolf is a key provider of numerous economic and ecological benefits,” says Bird. “They boost tourism in rural areas and improve ecosystem health by keeping browsing animals in check.”

The final recovery plan is expected in November.