Lowering the Boom on Wildlife 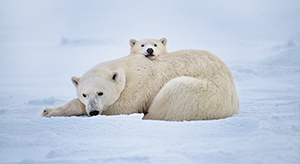 Whether it’s air guns blasting in the ocean or thumper trucks pounding the Arctic tundra, seismic testing for oil and natural gas is devastating for wildlife. From whales, dolphins and sea turtles to denning polar bears and migrating caribou and birds, this loud, disruptive activity forces animals from their wintering, feeding, breeding and calving habitats.

By generating seismic waves—energy that travels through the Earth’s layers—geologists can locate oil and gas reservoirs that lie beneath the seabed or tundra. But the sonic booms that create the waves can travel as far as 2,500 miles underwater—approximately the distance from New York to Los Angeles.

Seismic air guns produce some of the loudest human-made noise in the ocean—topping 240 decibels, the equivalent of a grenade blast. The deafening noise is linked to the stranding deaths of whales, dolphins and porpoises—marine mammals that rely on their sense of sound to navigate. It can also cause whales to lose communication with their calves and deafness, making it difficult to find food and mates and to avoid predators.

Scientists further warn that air guns—which are towed behind ships and blast pressurized air every 10 to 12 seconds nonstop for weeks or even months—can also harm fish and plankton, a critical food source at the base of the marine food web.

Under the direction of the Trump administration, the National Marine Fisheries Service granted five oil and gas companies permission to “incidentally but not intentionally harass marine mammals” as they search for potential fossil fuels on seabeds off the Atlantic Coast from Delaware to Florida. These coastal waters have been free of drilling for more than 50 years, and all Atlantic state governors oppose the move, along with a coalition of fishing and tourism businesses and conservationists.

“President Trump is essentially giving these companies permission to harass, harm and possibly even kill marine life, including the critically endangered North Atlantic right whale—all in pursuit of dirty and dangerous drilling as close as three miles from shore,” says Jane Davenport, a Defenders staff attorney. “If and when oil or gas is found, it’s only a matter of time before a spill happens. Not to mention that burning these fuels contributes to climate change, which further harms marine wildlife as the ocean warms and acidifies.”

The effects of testing may be especially harmful to North Atlantic right whales. Fewer than 420 of these whales survive, making it one of the rarest large whales on the planet. Scientists are united in concluding that this species cannot withstand seismic blasting. The whales’ only known calving grounds are in areas where testing has been proposed off the coasts of Florida and Georgia.

Meanwhile, the Bureau of Land Management in December issued a draft plan to lease the coastal plain of the Arctic National Wildlife Refuge for oil and gas drilling. More than 1.6 million acres could be at risk for seismic exploration, with thumper trucks crisscrossing the landscape beating low-frequency booms into the fragile tundra.

The coastal plain is critical habitat for the federally protected polar bear. Exploration—undertaken during the bear’s denning season—would involve 90,000-pound trucks with massive off-road tires driving around, between and even over denning polar bears, displacing and even crushing mothers  with cubs.

According to a leaked memorandum obtained by Mother Jones in December, the U.S. Fish and Wildlife Service estimates that a likely seismic testing scenario could result in the death or injury of approximately 15 polar bears, adversely affecting the small, declining southern Beaufort Sea population. Their numbers have dropped by almost 50 percent in the last few decades.

In addition, oil exploration would place airstrips and large encampments on the tundra, which is also home to grizzly bears, wolves, muskoxen, arctic foxes and migratory birds that arrive from all 50 states.

“This administration continues on a series of senseless and reckless actions to accelerate drilling onshore and offshore that ignores science, turns a deaf ear to public opinion and attempts to skirt the law,” says Jamie Rappaport Clark, Defenders’ president and CEO. “We will see this administration in court soon for its senseless attempt to turn large swaths of one of the planet’s greatest wildlife wonderlands into a petro-industrial wasteland.”

Seismic Testing by the Numbers

2,500 MILES
How far seismic blasts can travel underwater—approximately the distance between New York City and Los Angeles. That means it’s possible for a whale near Florida to hear seismic surveys operating off the coast of South Carolina.

200,000 SQUARE MILES
Area of the Atlantic Ocean that the proposed seismic air-gun surveys would blast. The air guns discharge resounding booms at 12 to 16 second intervals, 24 hours a day, seven days a week, for months on end.

350,000 EXPOSURES
Approximate number of times in one year that whales and dolphins will be harassed by seismic blasting, according to permits drafted by the National Marine Fisheries Service. The service estimates that nearly 2,000 of the exposures will be loud enough to cause permanent hearing loss, which would severely impede the marine mammals’ ability to communicate and find food.

28 SPECIES
Number of marine mammal species the National Marine Fisheries Service would allow companies to harm. Six are endangered or threatened under the Endangered Species Act, including the North Atlantic right whale.

A Whale of a Problem

To recover orcas we need to help salmon