A Whale of a Problem

To recover orcas we need to help salmon 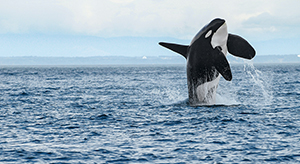 With the situation dire for federally endangered orcas off the coast of Washington state, Defenders is calling for emergency efforts that include significantly increasing the funding for the recovery of salmon—this orca population’s main food source.

At press time, with the population teetering at 75 and one more starving orca clinging to life in the Salish Sea, the state legislature is considering a $1.1 billion budget proposal by Gov. Jay Inslee to fund essential habitat restoration and water-pollution prevention that could begin to help these critically endangered marine mammals survive.

“Without a significant increase in conservation funding from the state legislature, southern resident orcas will likely go extinct in the next few decades,” says Robb Krehbiel, Defenders’ Northwest program representative, who leads Defenders’ orca advocacy efforts in the state.

The starving orca, J17, is the mother of the female orca who made national news last summer as she swam carrying her dead calf on her head for 17 days. J17 is still of reproductive age, which would make losing her even more of a tragedy for the population.

“Southern residents depend on healthy and plentiful salmon to survive, but today salmon in the Salish Sea and the Columbia, Snake, Willamette and Sacramento rivers have been federally listed as endangered or threatened themselves, impacted by habitat loss, pollution and dams,” says Krehbiel.

Unlike other orcas, which live in every ocean and are doing well, the southern resident population is a genetically distinct group that does not breed with other orcas and that dines almost exclusively on chinook salmon. Other populations with overlapping ranges eat a more diverse diet of marine mammals, sharks and rays.

Every winter, southern resident orcas gather at the mouth of the Columbia River, hoping to gorge. But for about 80 years, eight federal dams have significantly reduced salmon runs along the lower Snake and lower Columbia rivers.

Defenders supports the removal of the four lower Snake River dams and is pushing for increased water “spilled” over eight dams in the Columbia and Snake rivers, which would allow salmon to bypass dangerous turbines and strenuous bypass systems and instead spill with the water over the tops of dams in spring. Energy companies generally oppose spillways because they reduce energy production and revenue. But a recent solution limits the spill during peak energy demand times—four hours in the morning and another four in the evening—and increases spill throughout the rest of the day.

Defenders is also pushing for toxic stormwater runoff remediation in the Salish Sea. Water pollution degrades and destroys salmon and orca habitat, harms the food sources salmon rely on and causes health problems in salmon and orcas, particularly in calves that ingest a chemical cocktail of pollutants as they nurse.

“If we are serious about saving orcas, we must quickly and aggressively remove outdated, unneeded dams,” says Krehbiel. “We must fully protect and restore our rivers and floodplains, which includes limiting and removing harmful construction projects, and we must significantly decrease stormwater runoff by strategically installing large-scale ecofriendly stormwater infrastructure throughout urban areas.”

Orcas Love Raingardens
Defenders recently began our “Orcas Love Raingardens” at schools and parks in Tacoma, Wash. These gardens capture and clean stormwater and serve as outdoor classrooms for students to learn about water pollution and how to protect wildlife. Visit defenders.org/orcalove.

How You Can Help All Aquatic Wildlife

Lowering the Boom on Wildlife