Perhaps the biggest distinction is that lynx mostly occur only in northern states along the Canadian border or in mountainous regions, while bobcats range across almost the entire Lower 48 states. Lynx, like other forest hunters, play an important ecological role. As a mid-size carnivore, lynx target smaller prey species that reproduce relatively quickly. They also require a mixed habitat that includes younger forests with thick vegetation for hunting small prey, and older forests with a full canopy and good cover for denning.

In 2000, in response to Defenders’ petition and litigation, the U.S. Fish and Wildlife Service (FWS) listed the lynx as “threatened” under the Endangered Species Act (ESA). This listing provided lynx with many protections and much needed attention, helped support research and monitoring of lynx populations across the lower 48 states, and stopped lynx trapping in Montana, but in 2018 the FWS announced its recommendation to remove protections. This recommendation dodges the court order requiring the FWS to publish a recovery plan for the lynx, now more than 15 years overdue. In 2011, an oil company called PXP presented a proposal for oil and gas wells in lynx habitat in the Upper Hoback region of Wyoming, but the project was put on hold after Defenders and our conservation colleagues intervened. PXP agreed to sell its leases and end its project and Defenders is continuing to monitor the lynx’s remaining strongholds. Defenders also supported the Colorado Division of Wildlife as they reintroduced lynx to core habitat in the southern Rocky Mountains.

The lynx’s most important requirements — snow, space, hares, and habitat connectivity — are threatened by climate change and various human activities.

Lynx are generally found in moist, boreal forests that have cold, snowy winters and a high density of their favorite prey: the snowshoe hare. Lynx can be found throughout much of the boreal forest of Alaska and Canada. Today, in the Lower 48 they are known to have sustained breeding populations in Montana, Washington, Maine, and Minnesota and have been reintroduced to Colorado.

It is difficult to have an accurate estimate, but in the lower 48, lynx populations can currently be generalized as quite low and substantially reduced from historical levels.

Generally solitary animals, lynx usually hunt and travel alone, and are slightly more active at night than by day. Lynx hunt by actively walking, flushing and chasing prey, and by using resting or hunting beds to wait for prey to come close, and then giving chase.

Lynx do not create a den site – they locate their kittens under an existing feature, such as a downed log, root system, or simple ground depression surrounded by dense vegetation. Kittens stay with their mother for the first year while they learn to hunt. Yearling females may give birth during periods when hares are abundant. While mothers have an average of 4 kittens when there is a periodic abundance of snowshoe hares, they have smaller litters the rest of the time, when fewer hares are available.
Mating Season: March and April
Gestation: 63-70 days
Litter Size: 1 - 5 kittens

Lynx are specialized hunters that target snowshoe hare, which make up the bulk of their diet. Lynx are also known to occasionally eat mice, voles, grouse, ptarmigan, red squirrel and carrion.

Your adoption supports our work to protect rare and dwindling habitats like the pristine wilderness that lynxes prefer.

Read More About the Canada Lynx 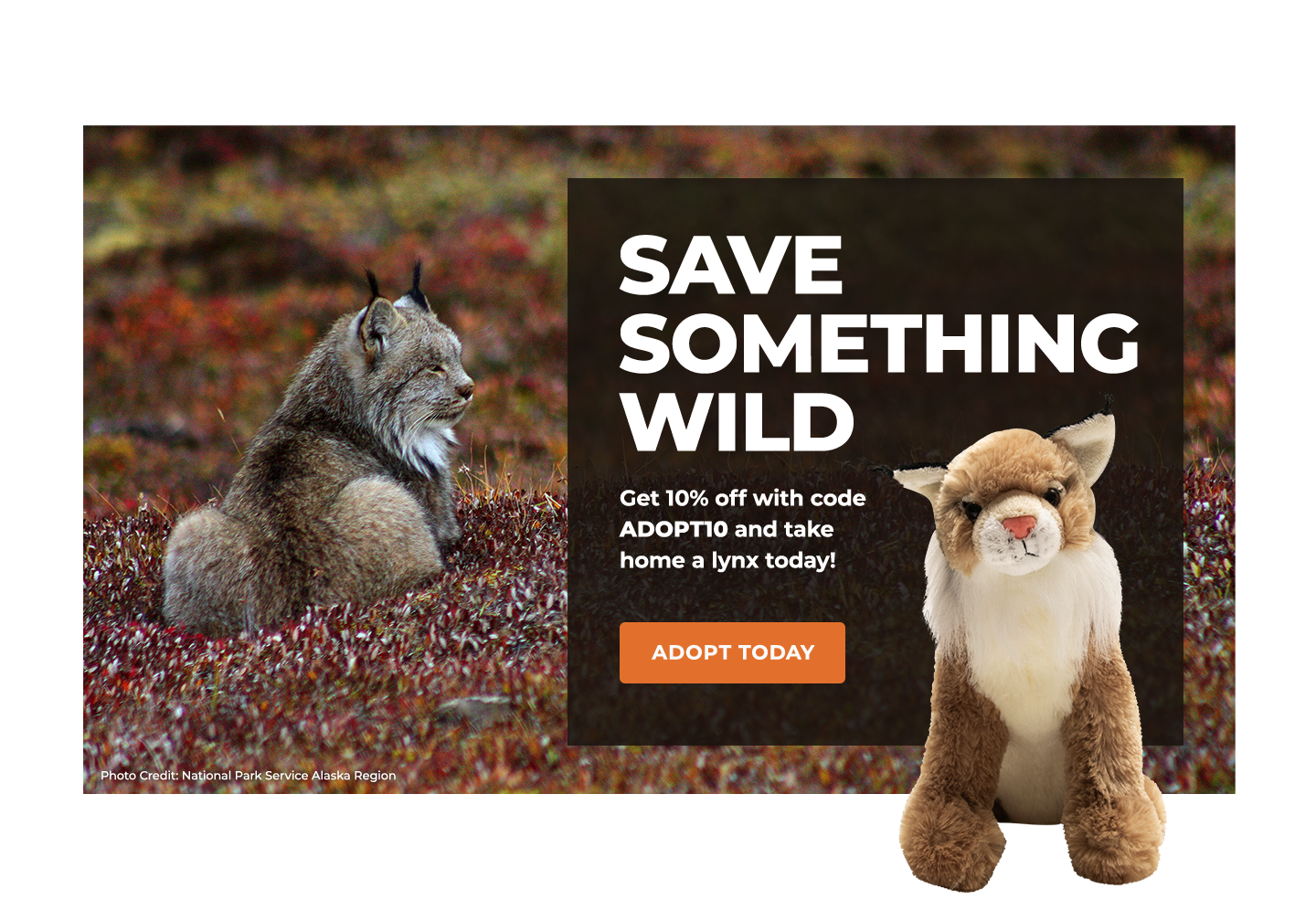