Fire-Adapted: Plants and Animals Rely on Wildfires for Resilient Ecosystems

Wildfires make it into the news for the tragedies that they leave in their wake. A household name in the West, the Camp Fire of 2018 was the most devastating fire in recent history, costing billions of dollars, destroying over 11,000 homes and killing over 80 people. As natural processes that have shaped ecosystems for millions of years, wildfires today are larger, burn longer and occur outside normal fire seasons. Historically, forest managers have carried out aggressive fire suppression to protect communities and to preserve trees for commercial timber harvesting. But such policies only serve to exacerbate the problem by disrupting natural fire cycles. Couple this with urban sprawl’s expansion into fire prone areas, and wildfires increasingly threaten the lives and wellbeing of people and wildlife. 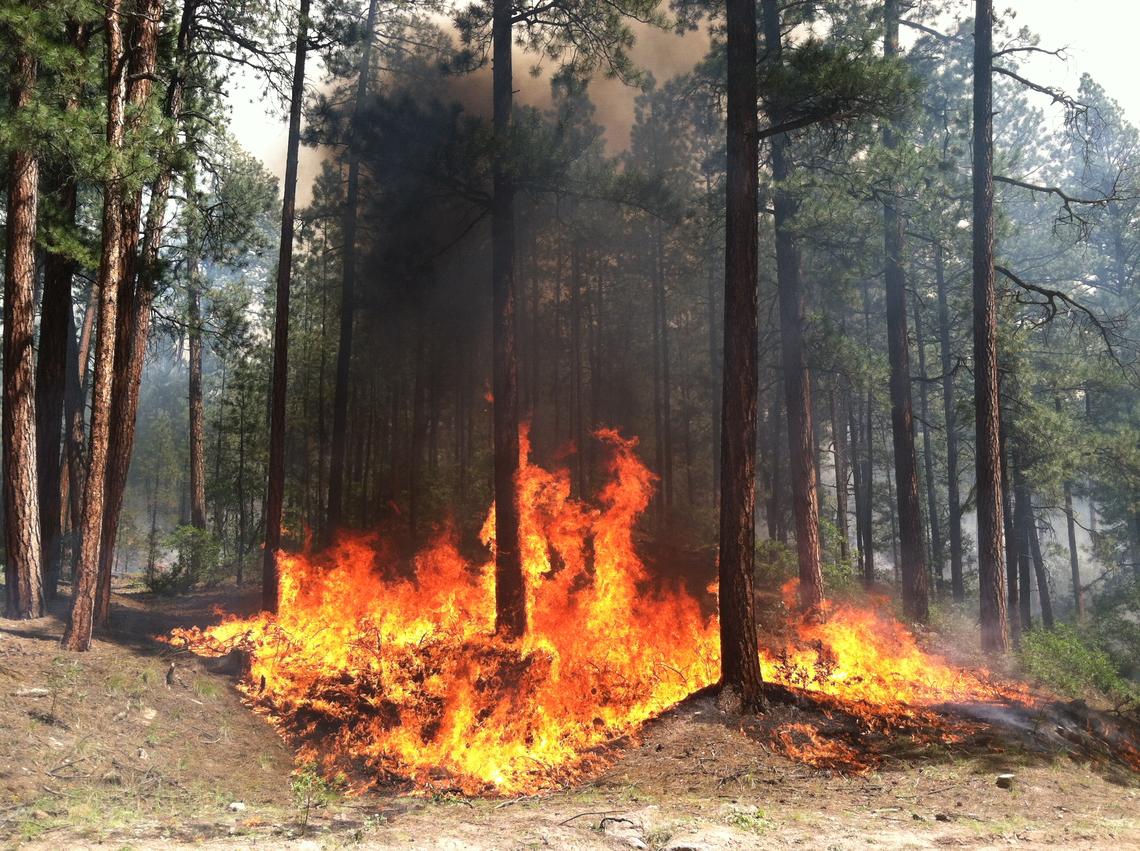 Wildfires have not always been so destructive. From the mixed conifer forests of the Sierra Nevada to the ponderosa pine forests of Washington, from the Carolinas’ longleaf pine forests to the grasslands of the Great Plains, many ecosystems in the United States are highly adapted to fires, with many plants and animals relying on regular burns. Diversity related to fire adaptation, or “pyrodiversity,” creates a mosaic of habitat types within ecosystems and landscapes with vegetation at different stages of succession.

Ecosystems like forests, prairies, meadows and streams are constantly changing as plants and animals move in and out just like how people and businesses may move in and out of a community. In nature, this change occurs through a mechanism known as succession, the process by which an ecosystem recovers after a disturbance, such as a fire, flood or human activity, that significantly alters the area. In the case of wildfire, succession refers to how an ecosystem regrows after the fire has been extinguished, transitioning from charred tree trunks to grasses to shrubs to mature trees in a matter of years to decades. The never-ending cycle of disruptions works to create patchwork quilt-like patterns that support biodiversity.

In all ecosystems, these disruptions are an essential part of life, shaking up the community of plants and animals, which promotes vitality and new growth. Fire is so important for the health of many ecosystems that it is sometimes referred to as a keystone process. Like a keystone species, a keystone process has a disproportionate influence on an ecosystem and removing such a process dramatically changes an ecosystem’s ability to remain healthy and diverse. Fire adapted forests, prairies, meadows and stream systems depend on fire to maintain pyrodiversity. 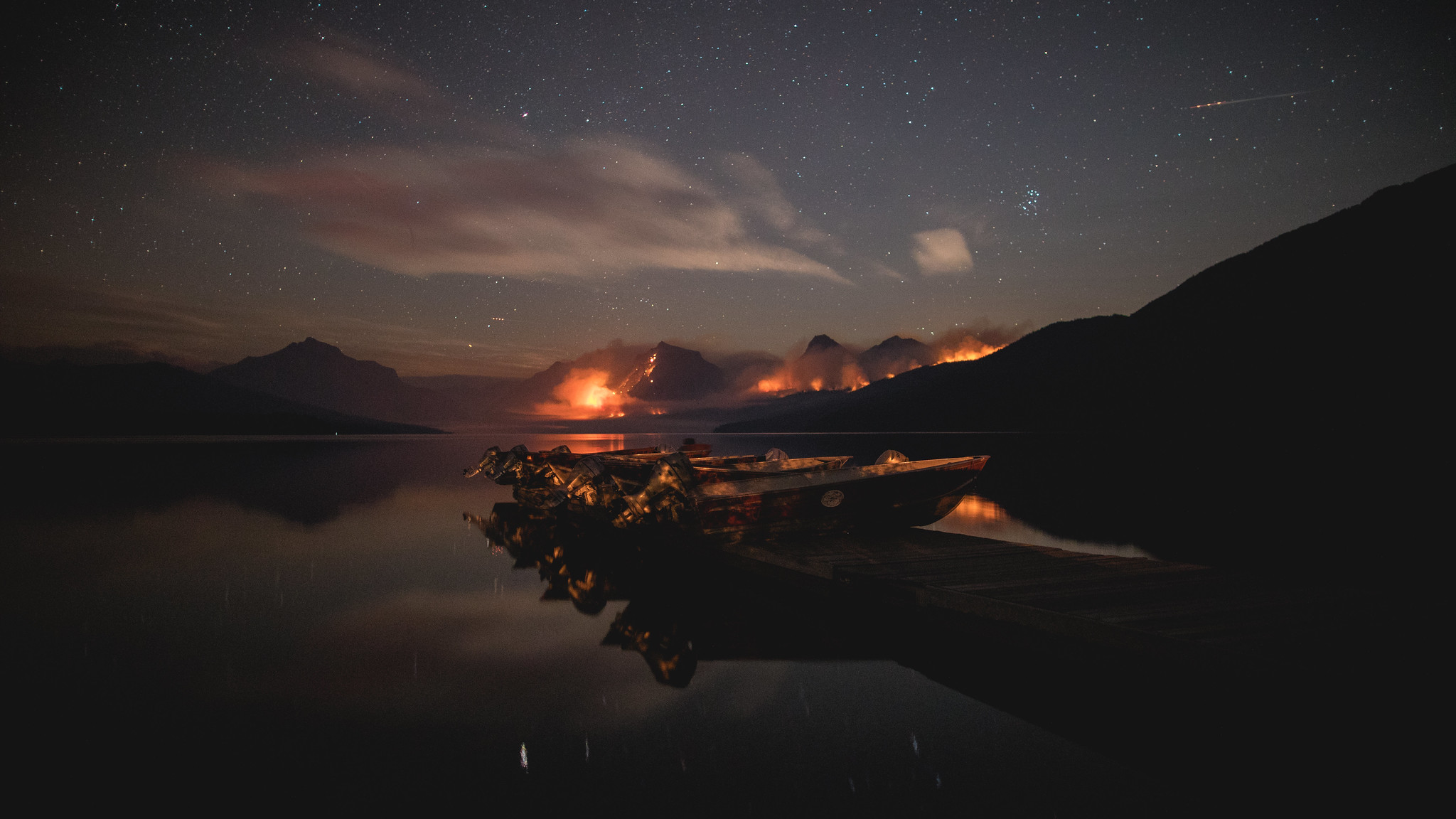 Forests can experience fires that range in severity from low to high, and many fires burn with a mix of severity levels depending on the landscape. Low severity fires primarily serve to clear out undergrowth like grasses, shrubs, leaves and branches, known as the understory, and high severity fires can help thin naturally denser tree canopies by killing trees. In ponderosa pine forests, low severity fires help maintain open spaces between trees, while in lodgepole pine and mixed conifer forests higher severity fires can help open the canopy. In both cases, once cleared, sunlight is better able to reach the forest floor and the new light, space and nutrient-rich ash create habitat for new seedlings. Pioneer species that sprout first, like ferns and moss, carpet the forest floor. Next enter the grasses to mix with the wildflowers, followed closely by shrubs and then small trees. Eventually, larger trees grow in and form a dense canopy of a mature forest. Some trees also depend on fire for reproduction. Famously, cones of the lodgepole pine are sealed with a special resin that only opens to release seeds when exposed to heat.

Some wildlife also depends upon wildfires. The patchwork pattern that fires create through varying levels of severity provides diverse habitat suited for different species at each of its successional phases. Black-backed woodpeckers largely rely on the dead trees left right after a severe fire for nesting sites and for foraging on the abundance of insects like beetles that are attracted to burned trees. On the forest floor, new wildflowers, grasses and fallen trees provide habitat for small mammals and food for larger mammals like the black-tailed deer. This in turn provides prey for raptors and other carnivores.

Once covering over 36 million hectares in the Southeast, the longleaf pine forest is a critical ecosystem making a comeback from forest management practices that include controlled burns. Longleaf pine forests are adapted to frequent small fires that preserve their unique savannah-like understory by keeping out shrubs and other hardwoods, promoting extremely high biodiversity. Gopher tortoises prefer to live in areas that are mostly dominated by low-growing groundcover where they can graze on native wiregrasses. To live in the highly fire reliant longleaf pine forests, gopher tortoises dig deep burrows, which help them safely weather fires. Considered a keystone species, gopher tortoise dig burrows which serve as homes for 360 other species of wildlife, including the longleaf pine forest’s endangered apex predator, the eastern indigo snake.

Although fires may seem confined to forests, prairies are also fire adapted. Not only do fires clear away dead grasses, but their ash acts like a fertilizer, revitalizing the landscape. Many grass seeds, such as big bluestem, need the nutrients provided by fires to grow, sometimes waiting for a fire before sprouting. Much like trees in forests, wildfires help to renew grasses and promote a patchwork community of varied grass and forb species.

Species like bison and pronghorn depend on these grasses and are healthier when they have access to a large variety of plants. Additionally, pronghorn rely on small shrubs during fawning season for protection and camouflage. Seasonal fires not only enhance the quality of available grasses, but they prevent shrubs from overtaking grasslands. Grassland birds, including mountain plovers, are also attracted to post-burn areas because they prefer short vegetation and bare ground.

Forest meadows are often known for their beautiful wildflowers, but they provide critical services for the forest. Meadows often have unique soils that allow water to collect, making them desirable places for diverse plants to grow, in turn attracting a diversity of animals. Grazers such as deer, moose and bighorn sheep depend on the grasses, field mice and small rodents live on the wildflower seeds, and birds and spotted owls hunt the rodents.

As any gardener may know, many tree species need a lot of water and without fire, trees like the lodgepole pine tend to encroach upon meadows, sucking them dry. Without water, grasses and wildflowers die out, allowing trees to further infiltrate meadows. Fires maintain high biodiversity in meadows by restoring the natural balance of water.

Rivers and streams also depend on wildfires to maintain their high diversity of plants and animals. Many amphibians and fish rely on logs that have died during fires and fallen into streams; these logs create pools, cool shady spots, and hiding places. While it may seem contradictory, regular fire clears undergrowth and the resulting small landslides of sediment and trees reinvigorate stream habitat. When the undergrowth is not regularly cleared by periodic fires, fires can rage out of control and over-strip stream banks of their vegetation leading to devastating erosion and landslides. Instead of building stream habitat, the landslides clog rivers and streams with sediment, harming wildlife locally and further downstream. An additional benefit of regular fires is that in the same way a sunscreen can keep a car cool, the smoke of forest fires can help serve as a reflective barrier. By reflecting some of the sun’s heat, especially in the summer, smoke cools rivers and streams by a few degrees, which is essential for keeping juvenile salmon healthy.

Restoring natural fire regimes is necessary for long-term sustainable management that protects both humans and wildlife. The successful management of forests like the longleaf pines, which has a history of culturally accepted prescribed burns, provides some insight into several ways to promote the restoration of natural wildfire regimes. They include allowing natural ignitions, such as those caused by lightning strikes, to burn for resource benefit instead of immediately going to fire suppression mode, limited ecologically based forest thinning before applying prescribed or controlled fire, and regularly maintaining fire treatments with additional prescribed burns. 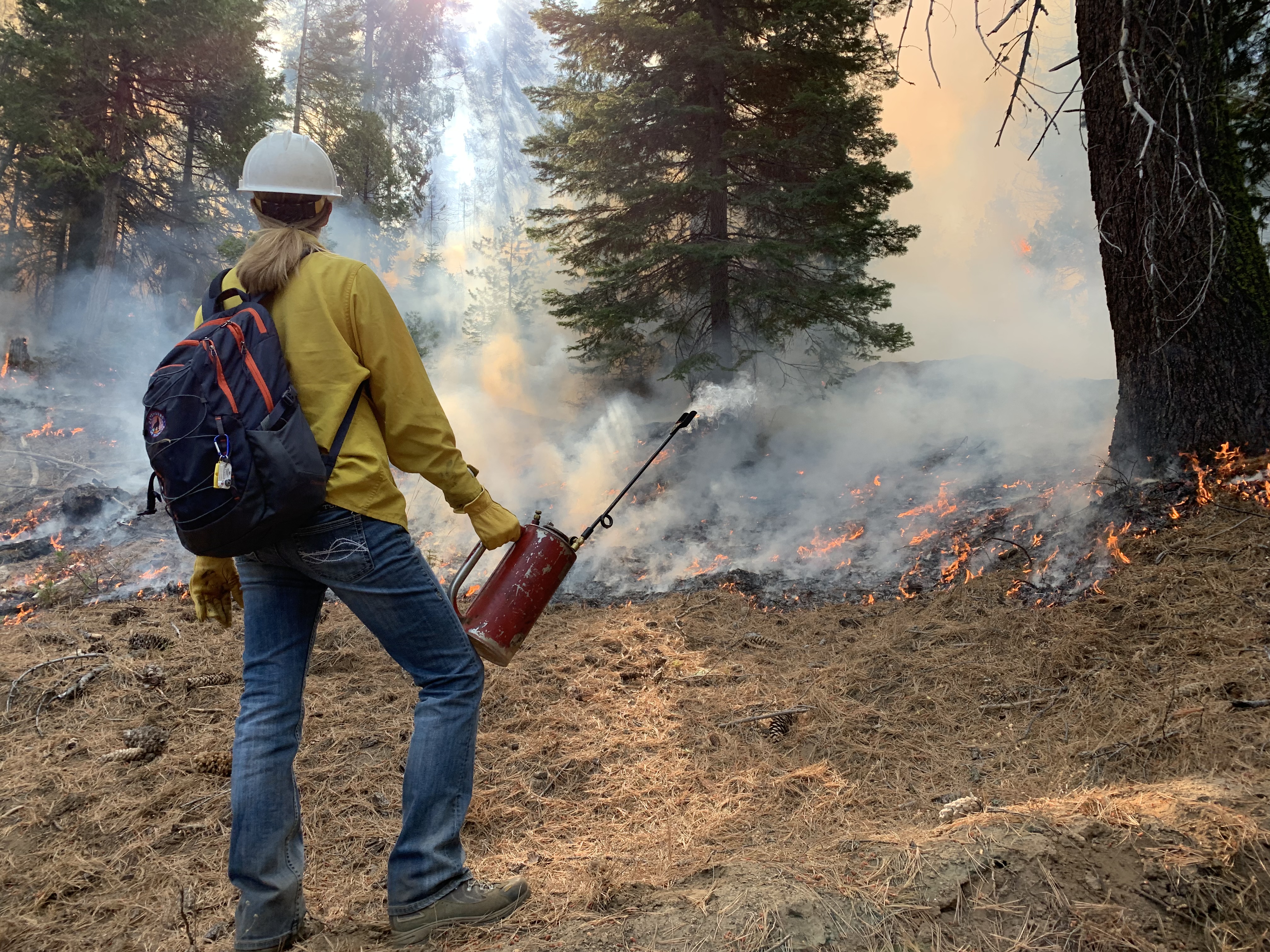 Defenders has long supported efforts to restore fire’s role in providing essential benefits such as diverse wildlife habitats and promoting resilience for natural lands. Our field staff are involved in a variety of forest and wildfire restoration projects such as the Dinkey Landscape Restoration Project and Southern Sierra Prescribed Fire Council, and we continue to advocate for proper, sustainable forest management, including the careful and appropriately timed use of controlled burns and managed wildfire.

Fire is a keystone process and pyrodiversity promotes biodiversity by maintaining a patchwork of habitats, supporting plants and animals. When natural areas do not burn in line with their historical variability, they are vulnerable to blazes that are highly destructive and dangerous to people and wildlife alike, causing their communities stagnate and their biodiversity to decline. Clearly, wildfires are a necessary, natural process that enables ecosystems to thrive. 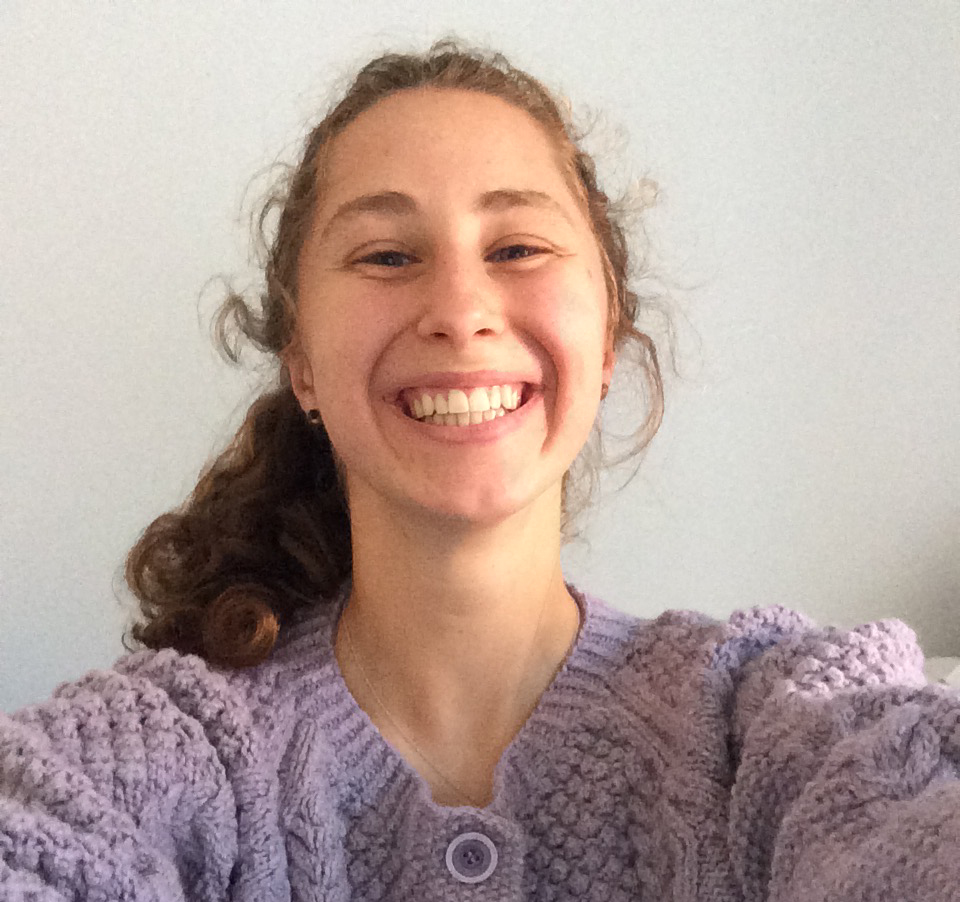 Michaela Sten graduated from Johns Hopkins University in May of 2019 and holds a BA in Earth and Planetary Science and a BA in Environmental Science focusing on Ecology and Oceanography. She is the Multimedia Intern in the Communications Department where she manages the photo database and assists with digital content.