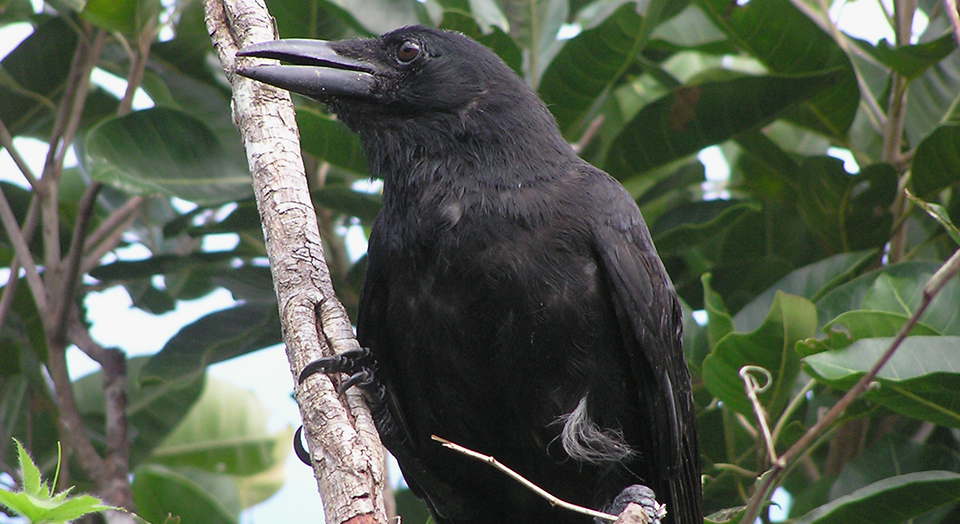 It might be hard to imagine crows as rare. But on the Mariana Islands in the South Pacific, which includes Guam and Rota, lives one of the world’s most imperiled corvids. Its plight is a cautionary tale for lower profile endangered species that are chronically overlooked and underfunded even when they’re on the verge of extinction.

Smaller in size than most mainland crows, the Mariana crow, or aga, historically played an outsize role on the landscape because it filled the niche of hawks and other raptors, which never existed on these islands. But when invasive predatory brown tree snakes were introduced to Guam after WWII, the aga, like so many other native species, took a big hit. Soon, it completely disappeared from the island. Today, about 50 breeding pairs still live on Rota. Unfortunately, this last population is declining for unknown reasons. “It’s on a very bad trajectory,” says John Morton, a U.S. Fish and Wildlife researcher and member of the Mariana crow recovery team. “But we definitely have a chance to save them. As long as the brown tree snake isn’t on Rota, there’s still hope.”

Lack of conservation funding remains a challenge even for critically endangered species. “We know Congress has allocated less than one-quarter of the funding scientists think is needed for endangered species,” says Jacob Malcom, director of Defenders’ Center for Conservation Innovation. Species like the aga are particularly hard-hit because the limited funds go to higher profile species.

“We need to find a way to fund research to identify the reason behind the decline, eradicate the invasives and do more captive breeding and wild releases before it’s too late,” says Morton. “It may look just like any other black crow, but the aga is a unique and important species that needs our help.”