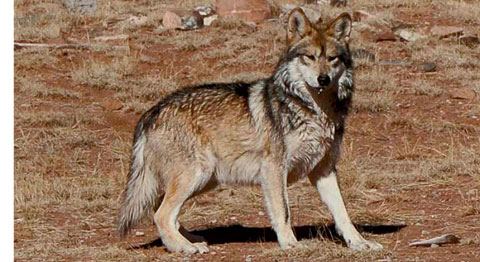 Snow lay two-feet deep among the ponderosa pine the day the first three Mexican gray wolves put their paws back down in eastern Arizona’s Blue Range Mountains. Legally poisoned and hunted from existence in the United States by 1970, Mexican gray wolves were reintroduced in 1998 by a government coming to terms with its mistake. Yet years later, el lobo’s foothold remains tenuous.

On the 15th anniversary of the Mexican gray wolf’s return, there is some good news. This year’s annual tally climbed to 75 wolves—up from 58 last year—surpassing a previous high of 59 in 2006. But with only three known breeding pairs in 2012  scientists and wildlife advocates remain concerned by the wild population’s lack of genetic diversity.

“Local landowners and ranchers are making great strides in coexisting with wolves, and the U.S. Fish and Wildlife Service (FWS) is now following the lead of science and keeping more wolves in the wild,” says Defenders’ President Jamie Rappaport Clark who, as then-FWS director, helped carry the crate with one of the first wolves to the release site in 1998. “However, since all of these wolves are the offspring of a small number of breeding pairs, this puts the entire population in a very vulnerable position that requires swift action from FWS if they are to truly recover.”

For almost 15 years, management policies kept wild wolf numbers low to address ranchers’ concerns—even though the wolf’s range is on 97 percent public forest land, and despite the fact that wolf kills account for a fraction of cattle deaths each year, generally less than 1 percent.

Overly aggressive management knocked the population down and kept it there, says Eva Sargent, Defenders’ Southwest program director. “Instead of supporting stable, reproducing packs, wolves are still captured and moved around because they cross invisible boundaries in small recovery areas in eastern Arizona and western New Mexico,” she says. “Until recently, many were sent back to captivity and some were killed for eating livestock. These removals were indiscriminant—it didn’t matter if the suspected cattle-eater was a mom with pups or a genetically valuable dad.”

Defenders won an end to the removal program in 2009, but too few wolves currently exist in the wild to ensure a healthy gene pool. All the Mexican gray wolves alive today are derived from just seven founding animals, including a female who was very probably the last remaining wild female Mexican wolf in the world. This handful of wolves gave rise to a captive-breeding program that saved the Mexican gray wolf from extinction, but so few founders means the wolves are left with little genetic diversity.

Genetic diversity is essential for populations to adapt and evolve when conditions change in their environment. Without it, populations start to have various problems tied to inbreeding, such as low litter sizes and susceptibility to disease. “So although more wolves are a cause for celebration, more pups from the same few breeding pairs won’t be enough to solve the genetic crisis,” says Sargent. “To express every bit of their genetic potential, the wolves needed to expand their population in the wild years ago, but this opportunity was missed, over and over. To make up for it, more immediate measures are needed, possibly including in vitro fertilization using stored semen or eggs from wolves that died years ago.”

Defenders is also calling for FWS to immediately release more wolves into the wild—to squeeze out every bit of their genetic potential. About 300 Mexican gray wolves live in breeding facilities but only two wolves have been released from captivity since 2006. One was illegally shot and the other was returned to captivity to increase the likelihood of bonding with a genetically valuable mate.

“These wolves are trying their best to survive—finding each other to mate and have pups, chasing elk and avoiding lawbreakers who would kill them just for being wolves,” says Sargent. “But the truth is they may not make it without some heroic support from FWS. Geneticists have spent years sounding the alarm and haven’t stopped, and Defenders won’t stop either. The Mexican gray wolf still has a chance if action is taken today.”