Skittering over sand hills and resting beneath the shade of shinnery oaks, the rare dunes sagebrush lizard is facing a new threat related to fossil-fuel energy development in West Texas. With sand in demand for oil and gas fracking, sand mining operations are popping up suddenly and quickly expanding across the dunes sagebrush lizards’ limited habitat. 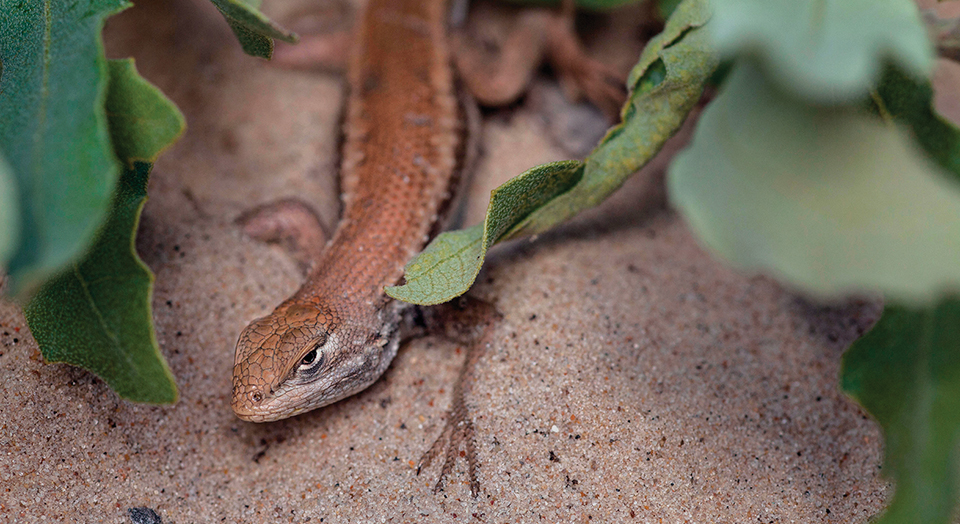 Using satellite data, Defenders’ Center for Conservation Innovation (CCI) found nine new sand mining operations in or adjacent to lizard habitat in West Texas. Sand mining removes large swaths of habitat—including digging 80-foot-deep holes—making it even more disruptive to wildlife than oil and gas development. These latest mines broke ground last year and had already disturbed more than 670 acres of lizard habitat and surrounding buffers by December. Based on lease data, the mines could disturb or destroy over 24,000 acres—nearly 10 percent—of the lizard’s habitat and adjacent buffer zones in Texas.

Fortunately, at least two companies—Vista Sand and Black Mountain—have voluntarily modified plans to minimize harm to the species at the request of Texas officials. But other companies have not cooperated. Hi-Crush and Atlas Sand Company, for example, own leases that cover 11 percent of high-quality lizard habitat and have not yet agreed to modify their operations. Defenders estimates that Fairmount Santrol has already excavated 72 acres of the lizard’s best habitat, and expansion of the company’s operations is likely.

“Without significant changes to the proposed footprint of these and other mines, lizard populations in Texas could be significantly harmed, and listing under the Endangered Species Act (ESA) could follow,” says Ya-Wei Li, Defenders’ vice president for endangered species conservation and CCI’s director.

In 2012, the U.S. Fish and Wildlife Service (FWS) declined to protect the species under the ESA even though thousands of oil and gas wells have already compromised the lizard and reduced its range to less than half of what it was in 1982. Instead FWS and the state of Texas finalized a voluntary species conservation plan intended to protect the lizard while allowing the oil industry to operate with minimal restrictions.

“From the start, the plan had problems,” says Li. “It kept names, property locations and promised conservation actions from public review, making it difficult to hold participants accountable.”

Further, because no one anticipated the influx of sand companies, the plan does not address their destructive operations.

“Even with the plan in place, we uncovered unauthorized and unreported oil and gas development in 2013 using satellite images,” says Li. “Agreed upon habitat restoration was not enforced and as of September 2016, 2,378 acres of the lizard’s 248,686 acres of habitat and surrounding buffer lands have been disturbed, much of it by companies that refused to participate in the plan.”

Long-harmed by habitat loss from energy development, the dunes sagebrush lizard (above) is one of the most imperiled lizards in the United States. Part of its habitat is in the Permian Basin, which is the largest onshore oil field in the United States, producing more than 1 million barrels of oil a day or 20 percent of all production in the Lower 48.

Defenders’ Center for Conservation Innovation (CCI) continues to use satellite images to track the footprint of all sand mines within or adjacent to lizard habitat. This year, CCI will expand the technique to other species. In doing so, it will help fill one of the biggest gaps in wildlife conservation: knowing exactly how endangered species habitat is affected by human activities.

For the full analysis and to see monthly images, visit defenders.org/CCIsandmines.