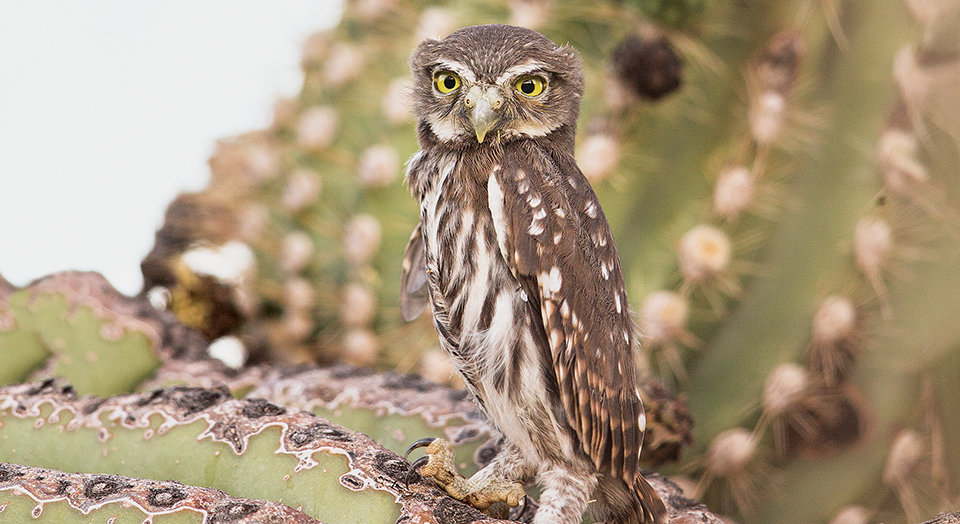 No bigger than a bluebird, the cactus ferruginous pygmy-owl is a bold little hunter. Fooling their quarry with patches of dark feathers on the back of the head that resemble eyes looking elsewhere, they pounce from perches onto crickets, scorpions and beetles, and fiercely take on lizards and birds twice their size.

Imperiled by habitat loss from development and livestock grazing, these now-rare owls do not migrate but reside year-round along rivers and deserts dominated by mesquite thickets, cactuses and low stands of live oak in what remains of their habitat near the Mexican border in Arizona and Texas. It is also where the proposed border wall threatens to further compromise their fate.

Vehicle traffic, human activity and lighting would all degrade habitat during the wall’s construction, and an insurmountable wall is sure to block these low-flying owls from reproducing and swapping genes with other pygmy-owls to the south. Typically, these raptors fly only four-and-a-half feet above the ground.

With fewer than 50 individuals left on the U.S. side, breeding with the Mexican population is vital to their survival. But now a flawed attempt to seal our southern border is literally putting this bird’s future up against a wall.

Habitat loss landed cactus ferruginous pygmy-owls on the endangered species list in 1997—thanks to pressure from Defenders—but only until 2009, when developers succeeded in convincing a federal court that because pygmy owls exist in Mexico, they can go extinct in the United States. With only an estimated 50 left in the United States, Defenders continues the fight to prevent urban development from destroying the owl’s remaining habitat. We also challenged the decision to deny federal protection to the owl, and in 2017, a judge ordered the U.S. Fish and Wildlife Service to reevaluate its decision to deny the bird protected status. Defenders is also working with multiple stakeholders in the Sonoran Desert of Arizona to ensure development is compatible with the species’ needs.