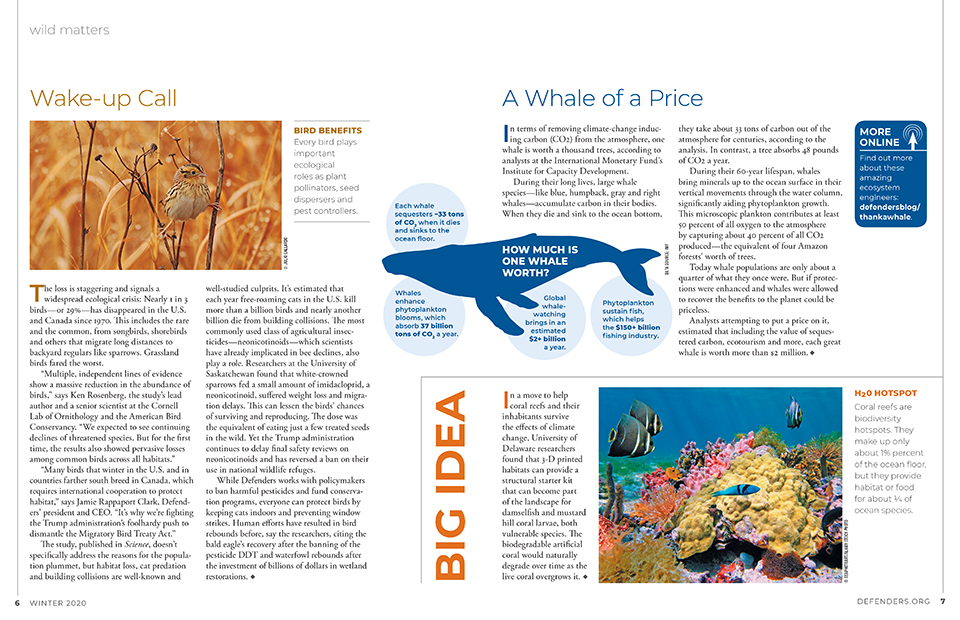 “Multiple, independent lines of evidence show a massive reduction in the abundance of birds,” says Ken Rosenberg, the study’s lead author and a senior scientist at the Cornell Lab of Ornithology and the American Bird Conservancy. “We expected to see continuing declines of threatened species. But for the first time, the results also showed pervasive losses among common birds across all habitats.”

“Many birds that winter in the U.S. and in countries farther south breed in Canada, which requires international cooperation to protect habitat,” says Jamie Rappaport Clark, Defenders’ president and CEO. “It’s why we’re fighting the Trump administration’s foolhardy push to dismantle the Migratory Bird Treaty Act.”

The study, published in Science, doesn’t specifically address the reasons for the population plummet, but habitat loss, cat predation and building collisions are well-known and well-studied culprits. It’s estimated that each year free-roaming cats in the U.S. kill more than a billion birds and nearly another billion die from building collisions. The most commonly used class of agricultural insecticides—neonicotinoids—which scientists have already implicated in bee declines, also play a role. Researchers at the University of Saskatchewan found that white-crowned sparrows fed a small amount of imidacloprid, a neonicotinoid, suffered weight loss and migration delays. This can lessen the birds’ chances of surviving and reproducing. The dose was the equivalent of eating just a few treated seeds in the wild. Yet the Trump administration continues to delay final safety reviews on neonicotinoids and has reversed a ban on their use in national wildlife refuges.

While Defenders works with policymakers to ban harmful pesticides and fund conservation programs, everyone can protect birds by keeping cats indoors and preventing window strikes. Human efforts have resulted in bird rebounds before, say the researchers, citing the bald eagle’s recovery after the banning of the pesticide DDT and waterfowl rebounds after the investment of billions of dollars in wetland restorations.