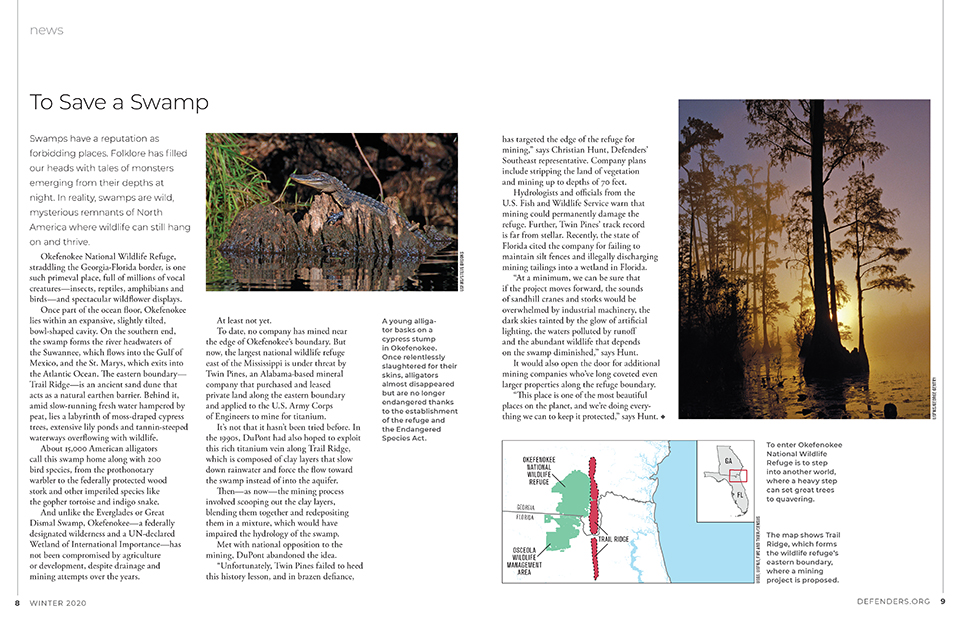 Once part of the ocean floor, Okefenokee lies within an expansive, slightly tilted, bowl-shaped cavity. On the southern end, the swamp forms the river headwaters of the Suwannee, which flows into the Gulf of Mexico, and the St. Marys, which exits into the Atlantic Ocean. The eastern boundary—Trail Ridge—is an ancient sand dune that acts as a natural earthen barrier. Behind it, amid slow-running fresh water hampered by peat, lies a labyrinth of moss-draped cypress trees, extensive lily ponds and tannin-steeped waterways overflowing with wildlife.

About 15,000 American alligators call this swamp home along with 200 bird species, from the prothonotary warbler to the federally protected wood stork and other imperiled species like the gopher tortoise and indigo snake.

And unlike the Everglades or Great Dismal Swamp, Okefenokee—a federally designated wilderness and a UN-declared Wetland of International Importance—has not been compromised by agriculture or development, despite drainage and mining attempts over the years.

At least not yet.

To date, no company has mined near the edge of Okefenokee’s boundary. But now, the largest national wildlife refuge east of the Mississippi is under threat by Twin Pines, an Alabama-based mineral company that purchased and leased private land along the eastern boundary and applied to the U.S. Army Corps of Engineers to mine for titanium.

It’s not that it hasn’t been tried before. In the 1990s, DuPont had also hoped to exploit this rich titanium vein along Trail Ridge, which is composed of clay layers that slow down rainwater and force the flow toward the swamp instead of into the aquifer.

Then—as now—the mining process involved scooping out the clay layers, blending them together and redepositing them in a mixture, which would have impaired the hydrology of the swamp.

Met with national opposition to the mining, DuPont abandoned the idea.

“Unfortunately, Twin Pines failed to heed this history lesson, and in brazen defiance, has targeted the edge of the refuge for mining,” says Christian Hunt, Defenders’ Southeast representative. Company plans include stripping the land of vegetation and mining up to depths of 70 feet.

Hydrologists and officials from the U.S. Fish and Wildlife Service warn that mining could permanently damage the refuge. Further, Twin Pines’ track record is far from stellar. Recently, the state of Florida cited the company for failing to maintain silt fences and illegally discharging mining tailings into a wetland in Florida.

“At a minimum, we can be sure that if the project moves forward, the sounds of sandhill cranes and storks would be overwhelmed by industrial machinery, the dark skies tainted by the glow of artificial lighting, the waters polluted by runoff and the abundant wildlife that depends on the swamp diminished,” says Hunt.

It would also open the door for additional mining companies who’ve long coveted even larger properties along the refuge boundary.

“This place is one of the most beautiful places on the planet, and we’re doing everything we can to keep it protected,” says Hunt.