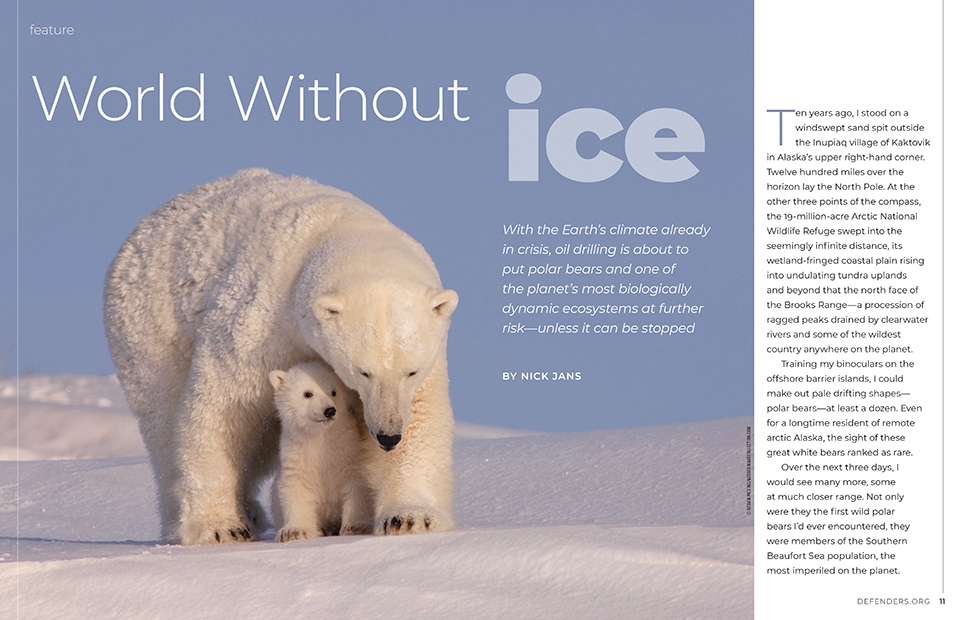 Ten years ago, I stood on a windswept sand spit outside the Inupiaq village of Kaktovik in Alaska’s upper right-hand corner. Twelve hundred miles over the horizon lay the North Pole. At the other three points of the compass, the 19-million-acre Arctic National Wildlife Refuge swept into the seemingly infinite distance, its wetland-fringed coastal plain rising into undulating tundra uplands and beyond that the north face of the Brooks Range—a procession of ragged peaks drained by clearwater rivers and some of the wildest country anywhere on the planet.

Training my binoculars on the offshore barrier islands, I could make out pale drifting shapes—polar bears—at least a dozen. Even for a longtime resident of remote arctic Alaska, the sight of these great white bears ranked as rare.

Over the next three days, I would see many more, some at much closer range. Not only were they the first wild polar bears I’d ever encountered, they were members of the Southern Beaufort Sea population, the most imperiled on the planet.

This is even more the case today as the Southern Beaufort Sea bears struggle to survive in a rapidly thawing world. As the fossil record shows, when ice permanently disappears polar bears don’t adapt. They cease to exist.

Classified as a marine mammal, Ursus maritimus literally means “sea bear.” But given the bear’s range is defined by the extent of polar ice, “ice bear” seems more fitting. Divided into 19 distinct populations around the Northern Hemisphere, the species evolved over a million years to master the northern sea ice, using the floating platforms to live and hunt.

Fearless swimmers and specialized predators, they focus on ringed and bearded seals along the continental shelf. Hundreds of miles offshore, over the abyss of the Arctic Ocean, summer ice remains, but it’s barren of seals and hunting is spotty at best.

The bears I watched had gathered near Kaktovik for two reasons. First, they needed to wait for new ice to form in late autumn. Another globally warmed Arctic summer had literally melted the near-shore ice beneath their paws, forcing them ashore. (Other bears may have opted to swim 100 miles or more in search of food.) Second, they came to feed on the remains of bowhead whales taken in the village’s autumn hunt, a food source that might keep the bears from slowly starving.

This onshore migration, once unheard of, is now an annual event. On autumn evenings as darkness falls, 50 or more polar bears—an incredible concentration of these normally solitary predators—gather to scavenge whale remains at what locals call the “bone pile.” Without ice, hungry polar bears have few options.

“Runaway climate change is already jeopardizing the polar bears’ future,” says Robert Dewey, Defenders’ vice president of government relations. “And now the Trump administration is pushing for intensive oil and gas exploration and development across the Arctic refuge coastal plain. This is wrong-headed for so many reasons. But for polar bears, in particular, it is catastrophic.”

Due to the decline of seasonal sea ice, an ever-increasing number of female bears—currently 22 percent of the population—den and give birth on the coastal plain. Opening this critically important habitat to resource extraction inevitably means injury, death and displacement of nursing mothers and cubs.

Although the scenario reads like a Terminator-style nightmare, it’s an all-too-real threat, says Dr. Steven Amstrup, who testified before Congress last spring. Currently lead scientist for Polar Bears International and project leader for the U.S. Geological Survey Polar Bear Project from 1980 to 2010, Amstrup, who focuses most of his research on the Southern Beaufort population, stated that the best industry safeguards only reliably identify half of all dens. Seismic surveys “would have a 90% probability of running over one or more occupied maternal dens with probable fatal consequences,” he testified.

In an interview with me, Amstrup further noted that a major crisis facing these bears is extremely low cub survival rates. In fact, research by Amstrup and others found that only two of 80 cubs were known to live past their second year. Given the population’s already precipitous decline, every cub born to the roughly 130 productive females—with an estimated 30 denning on the coastal plain—is critical to the population’s survival.

The battle over drilling in the coastal plain of Arctic National Wildlife Refuge is one of the most bitter and prolonged conflicts in environmental history, an epic fight raging for five decades and counting. And now a pitched confrontation over this irreplaceable landscape and its wildlife will be waged over the coming months in courtrooms hundreds of miles away.

The stakes loom large for both sides: An estimated 16 billion barrels of oil versus one of the planet’s most biologically unique and dynamic ecosystems—putting more than polar bears at risk. The refuge’s coastal plain is nesting habitat for over 200 species of migratory birds from all 50 states and six continents, calving grounds for the legendary Porcupine caribou herd and home to a variety of other wildlife including arctic foxes and musk oxen.

“Developing a major oil field and its infrastructure would damage and destroy crucial wildlife breeding habitat and summer range,” says Nicole Whittington-Evans, Defenders’ Alaska director. “In some cases, oil development could threaten the very survival of populations.” Add to this the cultural effects on the Gwich’in indigenous people to the south who depend on the migrating caribou.

Originally set aside in 1960 as the Arctic National Wildlife Range by the Eisenhower administration, Congress expanded the area and created the refuge in 1980. It included the coastal plain with a special designation for its 1.5 million acres because oil experts believed petroleum resources lay below. To ensure the refuge’s creation, Congress deferred a final decision regarding the coastal plain’s protection.

Since 1971 nearly 50 attempts to open the plain to oil development have been made, with each one defeated. “But this latest push looms as the gravest threat by far,” says Dewey.

President Trump has stated that opening the refuge to fossil fuels would be a major accomplishment of his presidency—never mind that a 2017 Yale University poll showed 67 percent of Americans supported a drilling ban in the refuge. The Tax Cuts and Jobs Act of 2017 he signed into law included a line-item to allow exploration and lease sales in the area.

“Given the extreme sensitivity of the coastal plain to damage and disturbance, the environmental impact review process should take years to complete,” says Mark Salvo, Defenders’ vice president of landscape conservation. “Instead, the administration has compressed and expedited planning, with the goal of conducting lease sales this winter. This slapdash process excluded proper scientific review and produced a leasing plan that is an imminent threat to the refuge and illegal under federal law.”

The Department of the Interior chose the Bureau of Land Management (BLM), with its Alaska office stacked with development-oriented appointees, to complete the environmental impact statement. Upon release of the draft statement, BLM scientists lodged formal complaints that their own words had been changed or deleted to distort and even reverse their findings regarding polar bears, fish, vegetation and cultural impacts to favor development. They were instructed not to make any corrections to the document.

The final record of decision—anticipated at press time—is expected to support the most extreme of several development plans. Scientists, government officials and even oil industry insiders say that this rushed, chaotic process is bound to result in inaccuracies, errors and oversights, making it vulnerable to litigation.

One key to challenging the BLM’s final decision is the federally threatened status of the Southern Beaufort Sea polar bear population and the impact of seismic exploration on their denning areas. “Oil and gas drilling have no place on the coastal plain and will only increase the threat to the world’s most imperiled polar bear population,” says Defenders’ president and CEO Jamie Rappaport Clark, who vows legal action. “With as few as 900 left, the survival of every single polar bear is crucial. We can’t afford to sacrifice one bear to fossil fuel development.”

New legislation is also needed, adds Dewey. “The Tax Act mandates two lease sales in the coastal plain, making the enactment of repeal legislation essential,” he says. “The House passed a bill in September to permanently protect the coastal plain, and a growing number of lawmakers support similar Senate legislation. However, refuge defenders will likely have to wait until the national election to consolidate their legislative victory since the current Senate is not likely to take up the bill.”

As for me, a resident of Alaska who has witnessed firsthand the profound effects of climate change over four decades—permafrost collapsing, lakes draining, sea ice dwindling, the tree line sprinting northward and longer and hotter summers resulting in colossal wildfires—I view this war over the Arctic coastal plain and its iconic polar bears as something not metaphorical and distant, but personal and visceral. This is a backs-to-the-wall moment in our battle against Big Oil for one of Earth’s last wild places. Committing our rapidly warming planet to more years of hydrocarbon consumption will only worsen the existing planetary crisis.

Amstrup reminds us, “If polar bears are doing well, that’s a pretty good indicator that the rest of the ecosystem is doing well. Polar bears are not only sentinels of the arctic ecosystem, but strong messengers of the health of ecosystems around the world. Everything is connected.”

And by protecting these bears and their habitat, we can also save ourselves.

Writer Nick Jans is the author of 13 books, including A Wolf Called Romeo.