First came the sound: an airy “poooof.” Then two sizeable nostrils spraying water emerged, followed by a blubbery, bewhiskered face. The massive mother manatee lifted her head and lingered at the surface momentarily to breathe in some oxygen. Beside her, just below the surface, floated her three-foot-long calf, about a third of her body length.

I couldn’t believe my luck. These slow-moving aquatic mammals can hold their breath for 20 minutes—and I wasn’t even sure that I had paddled into the right branch of the river as I’d been almost running aground the whole way.

Just before sunset the previous morning, I was staring longingly at the Chassahowitzka River in Homosassa Springs, Florida, after missing the last kayak rental of the day, when a woman hauling her kayak to land noted my disappointed expression. “Tomorrow, go to the second bend and turn left,” she told me. “The route is super shallow, but if you can make it to the end, there is a mother and calf in a deep pool. They will be stuck for a while, it seems, until the next good rain allows them to swim out.” 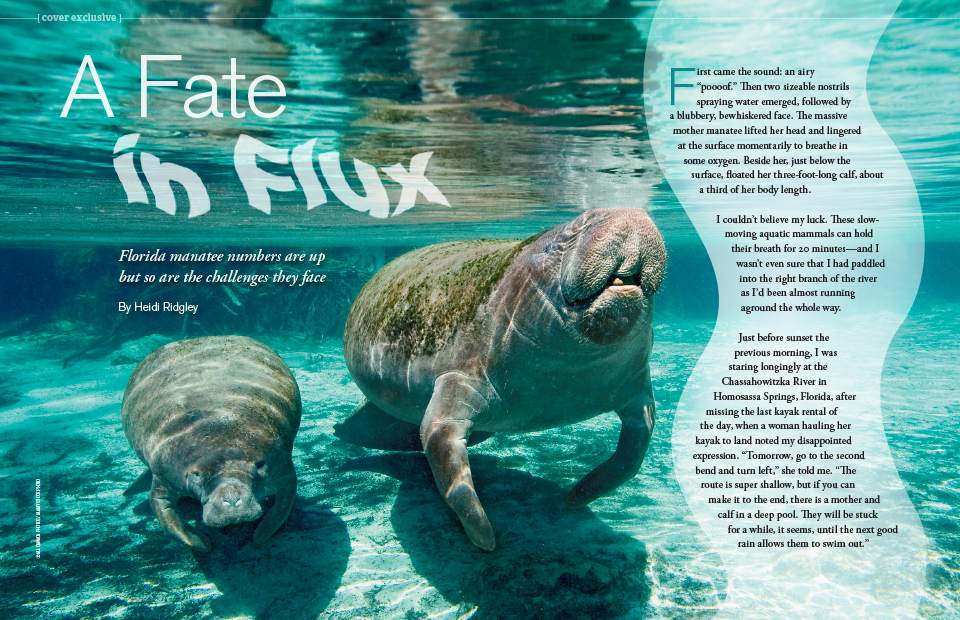 I expect the mother and calf will be the only manatees I see while I’m here because, even though it is February and manatees seek warmer waters from mid-November through the end of March, the weather is unseasonably warm right now. I’m told all the manatees are out in the Gulf of Mexico feeding. They only move inland when water temperatures dip below 68 degrees F. Today it’s in the mid-70s.

How many manatees—one of the first federally protected species—exist isn’t exactly known. But citing a manatee population resurgence, the U.S. Fish and Wildlife Service (FWS) decided to recategorize the manatee from endangered to threatened under the federal Endangered Species Act two years ago. And in December, the Florida Fish and Wildlife Commission (FWC) projected the population at approximately 8,810, the highest number since record-keeping began—although it is not a true headcount, and the agency plans to evaluate the species’ status based on population growth rates over time, along with survival and reproductive rates.

“The change in federal status and the abundance estimate certainly implies that our conservation efforts over the years have proved successful and helped the manatee make great strides,” says Elizabeth Fleming, Defenders’ Florida representative.

Fleming started working on manatee conservation 15 years ago when only about 1,200 individuals survived. “But even with this very positive news,” she adds, “we must remain vigilant because manatees still face great challenges.”

In fact, 2018 was a tough year for Florida manatees. Some 824 perished—just six shy of 2013’s record-high death toll of 830—from boat collisions, cold snaps and exposure to red tide. Named for the color it tints the water, red tide is an algal bloom that emits neurotoxins that also kill dolphins, sea turtles and other wildlife, and it can also cause breathing problems in humans.

Although red tides occur naturally offshore, when they approach land they are fueled by nutrient runoff from urban and agricultural sources that feed the algal growth. Higher average water temperatures from climate change further promote bacterial growth and allow it to persist longer, making the problem even worse.

But the two factors that will definitely tip the balance for manatees—identified by a U.S. Geological Survey population model and threat analysis and noted in the Florida Manatee Recovery Plan—is the loss of warm-water habitat and collisions with watercraft.

One look at manatees, with their hippo-like girth, and you wouldn’t think temperatures in the 60s would phase them. Yet these rotund, 1,500-pound creatures are subtropical with only a thin layer of fat protecting their bodies beneath their thick skin. In winter, cold stress can lead to malnutrition, skin lesions, pneumonia and even death.

The problem is that since the mid-1900s, amid a growing human population and the loss of habitat that comes with it, many of the manatee’s natural, warm-spring havens have disappeared or been damaged: blocked by dams, altered by construction, degraded from recreational overuse or drawn down as humans deplete the aquifer.

Three Sisters Springs, where I am headed next, is one of seven government-protected manatee sanctuaries in Kings Bay—part of Crystal River National Wildlife Refuge about 90 miles north of Tampa. Here more than 70 springs remain at a consistent 72 degrees F, drawing hundreds of manatees in the winter. Established in 1983, this refuge is the only one created specifically to protect manatees. The other principal spot is Blue Spring State Park on the St. Johns River.

But it’s not enough.

To survive the upsurge of humans, manatees adapted to shallow canals around residential neighborhoods and intracoastal waterways. About 70 years ago, they discovered and began migrating to the waters around newly built power plants. The plants pull water in from ambient sources to cool equipment and pump water back out slightly warmer. Today on the coldest days, some 60 percent of the manatee population in Florida relies completely on industrial thermal releases, and the plants have allowed manatees to reclaim some of their historical range.

“Manatees are intertwined with us now that we manipulated their natural environments and made them dependent on us,” says Fleming.

This is putting them at risk again as once-modern, fossil fuel-based plants increasingly become a relic of the 1900s. The projected operational lives of power plants used by manatees do not extend beyond 40 years, according to the U.S. Marine Mammal Commission. As they go offline, newer more efficient plants no longer need to discharge warm water. Energy generation is also moving toward solar and wind generation, and single-family home solar panel installation is growing, potentially diminishing the need for centralized plants.

“Power plants helped the manatee survive at one point, but now they’ve become a liability,” says Jim Valade, FWS’s Florida manatee recovery coordinator for 25 years and now the assistant refuge manager at the Crystal River refuge. “Some 2,000 manatees—a third to a quarter of the population—rely on a single facility owned by Florida Power and Light (FPL) at Cape Canaveral. If that goes away, all those manatees will lose their winter habitat. This is all the more reason to make a concerted effort to ensure that natural springs are accessible and the watersheds that recharge the springs are protected.”

The good news is that FPL is serious about its responsibility to protect these marine mammals. Even as it modernized last decade by demolishing 1960s-era, oil-fired plants to make way for cleaner-burning natural gas, the company installed temporary underwater heating systems to keep the water warm for manatees.

Not only does FPL have a full-time staff biologist, it conducts its own aerial manatee surveys, participates in tagging and telemetry studies, and monitors for cold stress and injuries. In 2016, it opened Manatee Lagoon in Palm Beach County, a bright and airy visitor center near the area manatees congregate, to educate visitors on what is needed to protect them and the ecosystem. Last year, FPL assisted in the rescue of a six-foot-long orphan suffering from cold stress. It wasn’t the first.

“We are fortunate to have a CEO who supports the community and is a big proponent of wanting the future generation to learn about science, to have a commitment to conservation and to understand how we are all connected to ecosystems,” says Richard Gibbs, an FPL spokesperson.

Still, Fleming worries what the future holds. “Manatees have proved resourceful, but we still must address the long-term challenges related to the loss of their natural habitat—by restoring some of it,” she says. “A prime example is the Ocklawaha River—the largest tributary of the St. Johns River—and the springs complex behind the Rodman Dam. It’s estimated the warm-water springs could support up to 1,000 manatees with even partial restoration, but right now manatees can’t really get past the dam.”

As to the most immediate threat to the species’ survival—boat collisions—Defenders advocated successfully for dozens of speed zones in particularly perilous areas around the state, including new seasonal speed zones enforced from November through the end of March. This allows manatees, which swim near the surface at only about 5 mph, time to recognize a boat is coming and get out of the way.

But the protocol doesn’t always work and more speed zones are needed, says Fleming. Two out of three manatees have scars from encounters with boat propellers. Those are the lucky ones.

When I meet up with Joyce Palmer, manager of the Crystal River National Wildlife Refuge, she tells me they just recovered two dead manatees last week in Crystal River, both confirmed boat strikes. No one reported hitting them, so they died without any rescue attempt.

“We have the tools in place to address boat strikes, including a self-reporting program for accidents that aims to help us rescue manatees that are struck,” she says. “We also have a fairly extensive network of federal and state manatee protection zones, where boats must travel more slowly or at idle—or are prohibited all together. But protective measures are only as good as people’s willingness to comply—or the availability of law-enforcement officers to enforce.

Valade reinforces the point: “It’s just so important that we keep the laws in place to address the threats. If we can’t keep enforcement officers out there and protection zones in place, the models and threat assessments show that the gains we made would be reversed. I think it would be very challenging if there was an effort to remove state and federal protections.”

Later that day as it begins to rain, Valade takes me to Idiot’s Delight within the refuge, a prime manatee viewing spot—if they’re there—because the water clarity is always perfect. But even though an aerial survey over Kings Bay the week before counted 588 manatees only a week ago, today it looks like they are out in the Gulf of Mexico grazing on sea grasses—except for another mother and year-old calf.

We stand on the boardwalk watching passively floating snorkelers surround them with six tour boats crowded in the background. It’s one place where the refuge still allows tourists to float—as long as they don’t touch—unless a manatee makes the first move. Harassing manatees disrupts feeding and resting times and could send them back into cold water so the snorkeling, while controversial, is regulated and fueled by the philosophy that if you can experience animals in the wild, you’ll see the value of protecting them.

In fact, Valade himself had a close encounter with a manatee that changed the course of his life. In the 1970s, he went out on the St. Johns River to spend some quiet time figuring out a topic for his thesis when a manatee came along and literally gave him a nudge. “Actually, she knocked me right out of the rowboat,” he grins. “That decided it for me.” Back then the total manatee population was estimated at only 600 to 800. Now, he says, he’s been astonished to see 2,000 manatees at Cape Canaveral alone.

Manatees have proved they are incredibly adaptable and it’s that resiliency that keeps him optimistic. “We’ve altered their habitat and made them dependent on us, but we can address the problem by restoring and protecting natural springs, conserving water and planting native vegetation,” he says. “Ultimately, that benefits people, too. What’s good for manatees is good for us.”

Heidi Ridgley is editor of Defenders.

Check out what restoring the Ocklawaha River would mean for manatees at defenders.org/manateeblog.

Immediate action needed to save the right whale from extinction