The largest and most destructive offshore oil spill in U.S. history, the BP Deepwater Horizon catastrophe, killed 11 men, triggered an uncontrollable gush of toxic crude into the Gulf of Mexico for almost three months and prompted a public outcry that resulted in regulations to prevent such an incident from ever happening again. 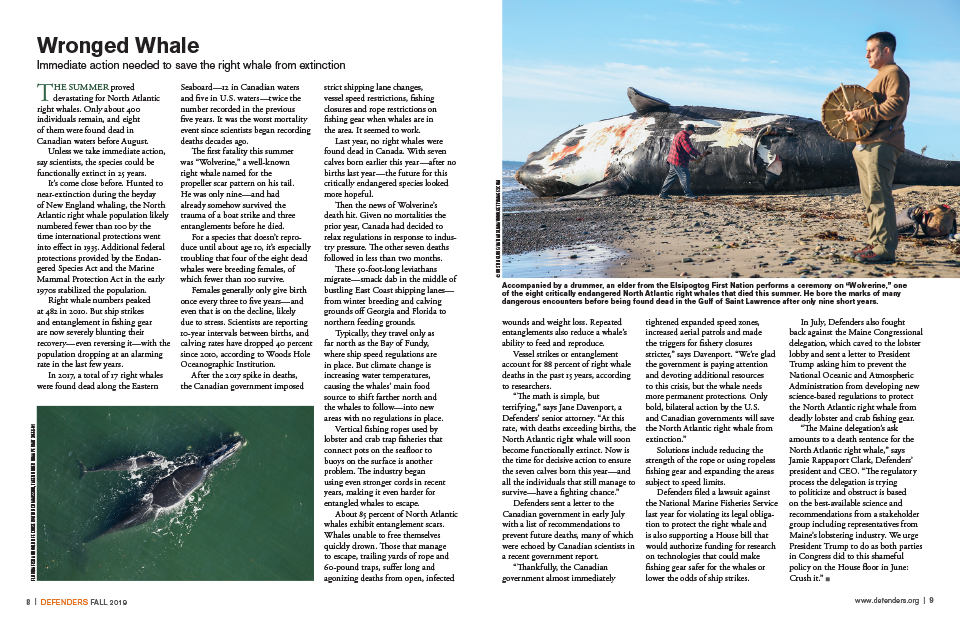 Plans announced in May by newly confirmed Department of Interior Secretary David Bernhardt, a former oil industry lobbyist, are aimed at significantly rolling back drilling safety requirements. The reason: “unnecessary burdens” on industry.

“Under the new regulations, the fox is once again in charge of the henhouse,” says Jane Davenport, Defenders’ senior attorney: Oil companies will be able to take shortcuts and use less advanced safety technologies while avoiding scrutiny by “self-inspection.”

Defenders sued in June as part of a coalition of 10 environmental groups alleging that the Interior Department disregarded extensive evidence and expert findings and failed to consider how the rollbacks could impact human safety and harm the environment.

The BP blowout dumped 130 million gallons of oil, polluted 1,300 miles of shoreline, killed billions of birds, fish, whales, dolphins, sea turtles, oysters and other wildlife and decimated the seafood and tourism industries of the Gulf states. The Gulf has still not recovered from the environmental devastation and economic impacts to the fishing and tourist industries.

The safety rollbacks, written by the American Petroleum Institute and put into effect by the Trump administration, include weakening the mandatory requirement for oil companies to test fail-safe devices called blowout preventers—the device that failed in the BP disaster—and eliminating independent safety equipment inspectors.

“The Trump administration’s dismantling of the safety regulations put in place to prevent another Deepwater Horizon catastrophe is improper, imprudent and—most important—illegal,” says Davenport. “This suit is about standing up to the fossil fuel industry on behalf of our invaluable ocean and marine wildlife heritage. We’ve already seen what happens when the oil and gas industry regulates itself with insufficient government oversight. The new rules do nothing but ensure that another disaster will happen again.”

Immediate action needed to save the right whale from extinction