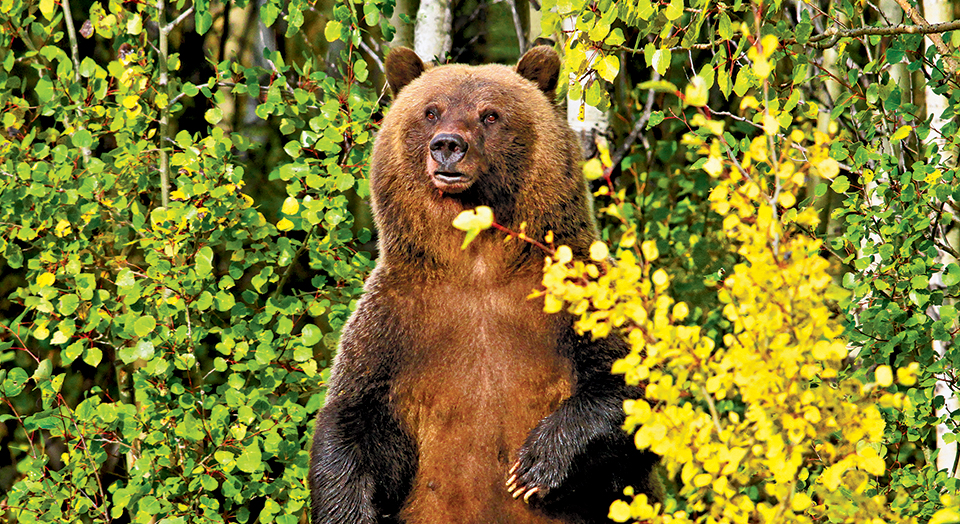 For more than a decade, my home was a log cabin in the Montana Rockies, off the grid and way off the clock. My to-do list on many days looked like this: Chop firewood, pump water, go watch wildlife next door in Glacier National Park. Especially bears.

Late one August, I camped for a while along the ridgeline of a mountain range overlooking a series of shallow subalpine lakes. It was huckleberry time, and the crop up there was beyond good that year. You could have told as much from the purple stains that tattooed my fingers and encircled my mouth. Or from the big clods of what looked like compressed pie filling all over the slopes. They were the dung left by tons—literally—of grizzlies drawn to huck heaven from home ranges near and far.

Before long, I had an adult bear in view at a lake. I dropped from the ridge to a lower band of ledges and set up a telescope. The animal was wading out from shore with only portions of its back and snout showing, furry alligator-style. This grizzly wasn’t in the water to hunt for fish or for anything else, though. It wasn’t there to drink its fill or to interact with another bear. It was just doing what any of us might while free-roaming the slopes on a hot afternoon—getting wet and keeping cool. Feeling fine. Every so often, the bear would stand to swipe at the surface or pound it with its paws to create a splash. At other times, Aqua-Grizz would submerge completely and then rise on its hind legs again to shake itself, whipping rings of water from its head and upper torso.

Returning to shore, the bear came upon a washed up tree trunk. After rolling this around for a few moments, the grizzly lay on its back among the green sedges, wrestled the heavy length of wood atop its body, lifted it, and began to juggle the thing with all four feet. Why? Well, why will a grown-up grizzly repeatedly slide down a tilted patch of snow? Why does one foraging in a meadow sometimes break into a wriggly, loose-limbed frolic, swinging its head and zigzagging this way and that? I think the better question—and also the answer—is: Why not? Imagine you own hundreds of pounds of muscle packed atop muscle, claws that measure three to four inches along the outside curve, and the ability to accelerate from zero to thirty-five miles per hour in seconds. What you want to do, you can do, no worries. You’re a heavy-duty organic power generator with a fresh tank of fruit sugar fuel, and this log is just lying there waiting to be tossed around.

While science can’t quite bring itself to say that grizzlies like to goof, the experts acknowledge that, young or old, these bears do devote an intriguing amount of time to play behavior. Exuberance is part of what defines them. So is a strongly developed sense of curiosity. Grizzlies are given to thoroughly investigating objects of interest, manipulating them with their mouth as well as with those broad, flexible paws, trying in their own way to learn more about how the world works. It’s one of the main reasons I’ve always found it natural to relate to grizz—to imagine myself in their place as they move through a landscape, poking around. I also try never to forget that the same animals can instantly turn volcanic when upset.

The grizzly eventually lost interest in the log and waded back into the lake. There, the bear resumed whapping the water with its paws, alternately dunking and rising to do the subalpine swimming hole shimmy-shake. For a few minutes, it spent more time than usual with its head underwater. I thought the bear might be investigating something below. That was before a closer look through the telescope revealed that it was blowing bubbles with its nose. The water’s surface tension, layered with a fine summer film of pollen and dust, kept many of the bubbles bulging in place after they rose, glistening atop the lake like a flotilla of small jellyfish. The grizzly bit at some. It stood upright once more, chest deep now, and appeared to look the bubbles over carefully. Then it started popping the largest by pricking them one by one with the tip of a claw.

Excerpted from Tracking Gobi Grizzlies: Surviving Beyond the Back of Beyond © 2017 by Douglas Chadwick. Used with permission of Patagonia.

When in grizzly territory be bear aware: Carry bear spray (wear it!) and know how to use it (practice!).

Whether you travel afar or stay in your own backyard, here are some tips to make the most of wildlife-watching moments.