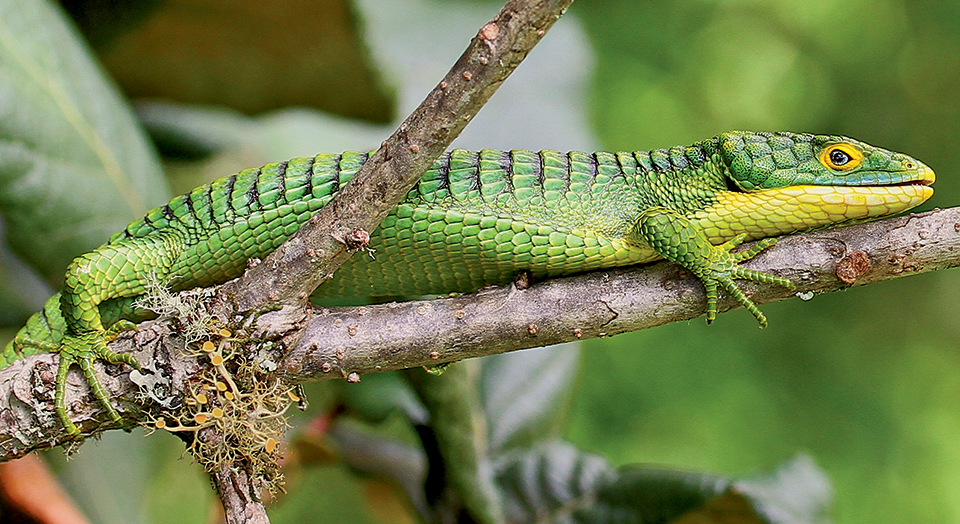 If you’ve never heard of tree-climbing alligator lizards, it’s not because you have your head in the clouds. In fact, it’s the secretive lizards that do.

High up in the humid, tropical montane cloud forests of Mexico, El Salvador, Guatemala and Honduras, these lizards—with their prehensile tails—are perfectly adapted to life in the trees. Here, they hunt crustaceans, insects and spiders in vegetation so dense that the ferns, mosses, lichens and orchids completely envelop the trunks and branches of trees. Unrelated to alligators, their name reflects the species’ wide, strong jaws and their thick scales.

Stretching under a foot at most from snout to tail, they spend so much of their time high in the canopy it makes them hard to spot. Unfortunately, those that want to capture them for the illegal pet trade are persistent and, along with destruction of their cloud forest habitat for agriculture and ranching, poaching has taken a toll on most of the 29 species. For some species, there is scant data and no one knows how they are faring. Others have such low population numbers and reproduction rates and such small geographic ranges that the illegal international trade—mostly for buyers in the United States and Europe—could wipe them out in just a few years.

But it doesn’t have to happen. You can play an important role in stopping the exploitation of these increasingly rare lizards by making people aware of their plight. Reducing demand is a vital part of ensuring these tough little lizards can keep their heads in the clouds for decades to come.

The global black market trade in live animals and parts is the fourth largest in the world, generating an estimated $20 billion a year in profits. A single arboreal alligator lizard can fetch up to $2,000 in the U.S. pet market. Live trafficked animals are often shipped under abysmal conditions, sometimes stuffed into plastic bottles, or loaded into suitcases. Up to 90 percent die in transit. Defenders is proud to have helped win strict trade protections for these rare lizards—with the goal of eventually prohibiting all trade.