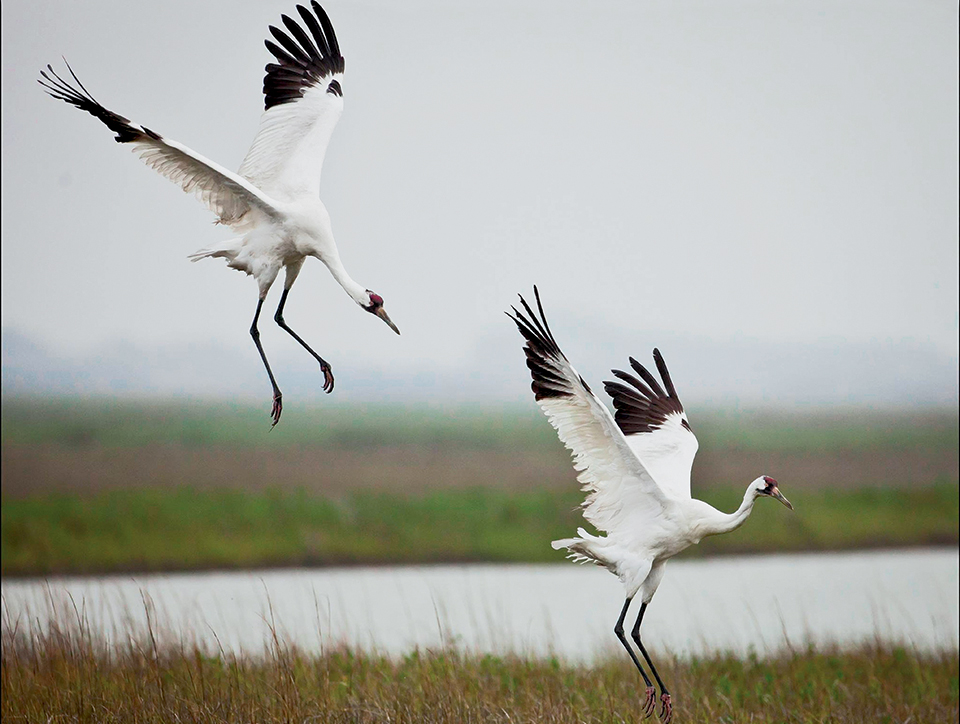 A wild trumpeting call rang across the marsh. I raised my binoculars and caught a flutter of snow-white feathers and black-tipped wings alighting in the shallow waters of Aransas National Wildlife Refuge. Two birds—whooping cranes—5-feet tall to their scarlet crowns, gracefully folded their massive wings, straightened and stealthily stepped across the marsh.

Aransas is winter habitat for whoopers, essential to the recovery of this highly endangered species. I didn’t expect to see the cranes on my visit, just two months after Hurricane Harvey ripped through the refuge in 2017. But there they were, the first to arrive on the Texas Gulf Coast, gliding in on the autumn winds after a 2,500-mile migration from remote nesting grounds in Canada.

Still, a feeling of apprehension came over me. Harvey had inundated more than half of the refuge’s freshwater sources with salt water, compromising crucial habitat for whooping cranes, which had almost gone extinct in the 1940s from hunting and habitat loss.

Now, with the recovery effort for the species at risk, refuge staff worked diligently to replenish freshwater ponds and to remove debris from coastal grasslands just in time to welcome back 505 migrating cranes that winter—a new record for the only remaining wild flock.

Aransas is one of 567 refuges in the National Wildlife Refuge System, the country’s only network of public lands and waters dedicated to wildlife conservation. The system encompasses more than 850 million acres, home to thousands of wildlife and plant species. From the far reaches of the South Pacific, to the ends of Alaska, to the tip of Florida, refuges protect an amazing diversity of life. They provide seasonal stopovers for waterfowl, winter forage for pronghorn and mule deer, nesting beaches for sea turtles, sheltering coral reefs for tropical fish, and habitat for more than 380 threatened and endangered species.

Unfortunately, and despite its tremendous value to wildlife, ecosystems and people, the refuge system is under unprecedented political attack. At the behest of special interests and fueled by fringe politics, the Trump administration and an anti-conservation Congress are seeking to sell out, give away or roll back environmental protections on refuges across the country. These efforts aim to divest refuge lands and waters from public ownership, exploit natural resources, subvert management and override protections for imperiled species.

Current legislative and regulatory assaults include schemes ranging from undermining the conservation of bears, wolves and other carnivores on Alaska refuges to reversing a ban on harmful agricultural pesticides that threaten bees, butterflies and other pollinators. This extreme agenda threatens the very concept of national wildlife refuges and the integrity of the refuge system itself.

On the far end of the Alaska Peninsula, where jagged volcanic peaks descend past wildflowers to lagoons and marshes that feed into the Bering Sea, lies Izembek National Wildlife Refuge. Every spring, tens of thousands of birds migrate along the Pacific Flyway to this remote and critical feeding ground. They include half the world’s population of emperor geese, along with dabbling ducks—pintails, teals and mallards—and flocks of sandpipers, plovers and other shorebirds. In autumn, more than 90 percent of the global population of Pacific black brant ride in with the north wind. Alaska brown bears, caribou, wolves, wolverines and foxes roam this wild landscape, while the refuge’s coastal waters are alive with sea otters, harbor seals, threatened Steller sea lions and all five Pacific salmon species. The first Wetland of International Importance in the United States, most of the refuge is also congressionally designated wilderness—the highest level of protection afforded public lands.

That hasn’t stopped the Trump administration from pursuing plans to trade away globally important wildlife habitat in the refuge to force construction of a destructive, expensive and unnecessary road through the heart of this vital preserve. Commercial interests have been the driving force behind the road proposal for decades. Last year former Interior Secretary Ryan Zinke made a backroom deal to hand over public lands in Izembek to a Native corporation, which would immediately grant them to the state to build the road. The proposal would sacrifice some of the most ecologically important wildlands on the planet, stripping them of wilderness designation and refuge protections, and undermining conservation of imperiled species.

The Interior Department has previously studied this boondoggle road project—and repeatedly rejected it. Taxpayers have already paid over $50 million to provide alternative transportation solutions for the small local community.

Defenders exposed the Trump administration’s nefarious land deal last year and then sued to block the road. Ignoring the pending litigation, the administration continued to thwart public process by moving ahead with a clandestine land survey, the precursor to construction.

Selling out globally recognized wilderness wetlands in Izembek would not only threaten wildlife and habitat, but set a dangerous precedent for other refuges and wilderness areas across the country.

Congress established Desert National Wildlife Refuge—the largest wildlife refuge in the Lower 48—specifically to protect bighorn sheep, which were plummeting toward extinction early last century. With about 750 individuals today, bighorns remain vulnerable and are sensitive to disturbance. That’s why Defenders is fighting the U.S. Air Force’s attempt to commandeer more than 1 million acres of the refuge for military combat exercises.

The Defense Department is seeking to take over more than two-thirds of the refuge to expand the already massive Nevada Test and Training Range. The proposal, which requires congressional approval, would prioritize war training across most of the refuge to the detriment of wildlife and public access to the refuge. Defenders and other partners support continuing the current management approach on the refuge—one that balances wildlife habitat needs with military use. Ceding management authority to the U.S. military would set another dangerous precedent for national wildlife refuges and other public lands.

Anchoring the northeast corner of Alaska, Arctic National Wildlife Refuge is an awe-inspiring expanse of more than 19 million acres of mountains, rivers, wetlands, tundra and lagoons that sweeps down from the Brooks Range to the wide, icy waters of the Beaufort Sea. The refuge is the essence of wild Alaska, seasonally hosting millions of birds that migrate from all 50 states and six continents, along with musk oxen, arctic foxes, Dall sheep, eagles, brown bears, lynx, wolves and more.

The refuge’s coastal plain is its biological heart, and the summer calving ground of the internationally famed Porcupine caribou herd. Each year, more than 200,000 caribou trek hundreds of miles across two countries to the coastal plain, a journey undertaken by the herd for millennia, and the second-longest terrestrial migration on the planet. The coastal plain is also the most important onshore denning habitat for federally protected polar bears in the United States. Mother bears are increasingly coming ashore to den and birth their cubs due to the climate-driven loss of sea ice.

Today this incomparable wildlife preserve is under attack from the Trump administration and Big Oil. In 2017, despite strong opposition from the American public, Congress opened the coastal plain to oil and gas development, bypassing legislative debate and undermining more than half a century of protection for the refuge. Now the administration is working to expedite seismic testing across the entire coastal plain, and lease these refuge lands to the oil industry in 2019. Oil exploration would occur during polar bear denning season, when heavy seismic-testing vehicles could run over dens, crushing mother bears and cubs and hastening the species’ decline. Drilling would turn the coastal plain into an industrial oil field, replete with well pads, pipelines, oil spills and pollution. It’s why Defenders is fighting this shortsighted, destructive scheme in the courts, on Capitol Hill and in corporate boardrooms by leveraging public and shareholder opposition against oil companies that hope to drill in the Arctic refuge.

Located at the nexus of four ecological zones—tropical, temperate, coastal and desert—and at the confluence of the Mississippi and Central migratory bird flyways, Lower Rio Grande Valley National Wildlife Refuge protects world-class biodiversity in southeastern Texas. The refuge helps conserve a wildlife corridor along 275 river miles from the Gulf of Mexico inland, connecting other federal, state and private conservation lands to sustain an incredible array of plant and animal species. Endangered ocelots and Kemp’s ridley sea turtles, 300 species of butterflies—half the butterfly species in the country—more than 500 bird species and imperiled jaguarundis rely on the refuge. These crucial public lands are also a hedge against the agricultural and urban development that has swallowed up much of the region’s wild habitat.

Now this unique and fragile refuge is in the crosshairs as the Trump administration seeks to construct new border barriers in Texas. Having already waived applicable environmental laws, the Department of Homeland Security is pushing ahead to build more than 24 miles of new wall segments that will irreparably damage the refuge corridor, destroy sensitive habitat, block wildlife migration, and trap and drown wildlife seeking to escape during floods. Defenders is suing the Trump administration to block wall construction and is lobbying Congress to withhold funding for border barriers.

The National Wildlife Refuge System includes five marine national monuments that protect a dazzling array of marine flora and fauna. The Trump administration has targeted three of these vital reserves for potential downsizing and downgrading of protections, including Northeast Canyons and Seamounts Marine National Monument.

Commercial interests, seeking access to vulnerable fish stocks, challenged designation of the monument in 2017 but lost in court. President Trump could attempt to reopen the monument to commercial fishing, oil and gas drilling and other resource use through a presidential proclamation. Defenders is standing by to immediately litigate any such attempt by the White House.

Find out more at defenders.org/refuge.