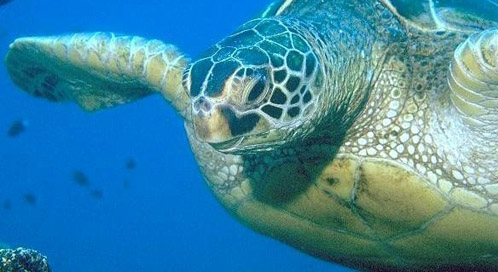 Named for the color of their fat—a result of their exclusively vegetarian diet as adults—green sea turtles come ashore each year to nest as they have done since the age of the dinosaurs.

One of the world’s seven species of sea turtles, the green is one of the five that feeds and nests in the United States, along the eastern shores of Florida. After traveling hundreds of miles to the beaches where they were born, females haul onto the sand at night to dig nests for up to 200 soft, leathery eggs. In a couple of months the eggs hatch and the hatchlings make a dash for the sea. One in 100 will survive the decades-long stretch to maturity. Those that do make it can live for almost a century.

Today, the biggest threat to greens and other sea turtles is the fishing industry. Even though the green sea turtle is not intentionally targeted by fishing vessels, fishing gear can accidentally entangle and drown these air-breathing reptiles. And despite international protections, turtle meat and eggs are considered exotic delicacies in parts of the world. Development on their nesting sites also plays a role in their decline.

Then there is climate change. It’s ever-increasing threat is altering coastlines and sinking some traditional turtle-nesting sites. Rising temperatures will disrupt the sex ratios of turtles, whose gender is determined by egg temperature during incubation. As beaches get hotter, more and more greens will be born female. Other hatchlings will simply fry while attempting to dig out of their nests through hot sands.

The good news is green turtle nests are at a record high in Florida, thanks to the protections put in place in 1978 under the Endangered Species Act. Numbers are still nowhere near historic levels, but there is hope that these sea turtles will continue to come ashore into the next millennium.