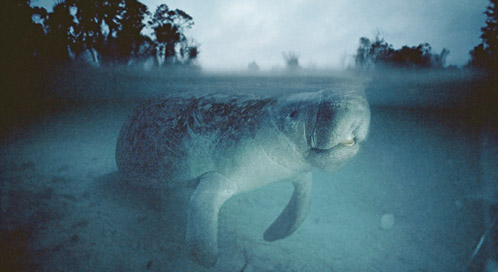 It was a tough year for Florida manatees. At press time in December, the death toll stood at 796—more than double the 2012 total, making 2013 the deadliest year on record.

Manatees face a trifecta of troubles: algal blooms, boat strikes and loss of warm-water habitat. This year, a red tide outbreak caused by microscopic algae off Florida’s Gulf Coast—that persisted unusually long—resulted in hundreds of drowning deaths. These plantlike organisms produce a toxin that affects the central nervous system, making it difficult for the animals to lift their heads out of the water to breathe. A different algal bloom on the east side of Florida in the Indian River lagoon killed off much of the manatees’ seagrass food supply. Forced to find different food, well more than 100 animals perished. “While we still don’t know the cause behind these deaths, what we do know is that taking better care of our springs, rivers and watersheds would certainly benefit manatees and many other species,” says Elizabeth Fleming, Defenders’ senior Florida representative.

Meanwhile, the greatest long-term threat to manatees is loss of warm-water habitat. Manatees need water temperatures above 68 degrees F to survive. But residential development has greatly reduced the natural, warm-water springs where manatees winter. Nearly 60 percent of the population now depends on outfalls at electric power plants, which means a power plant failure during a cold snap in Florida could wipe out even more of these endangered animals if they’re not able to find another warm refuge.

“With so many lost already, it’s more important than ever that they find safe, warm, wintering waters,” says Fleming. “That’s why Defenders is working to protect natural springs, seagrass beds and other habitats that are critical to their survival.”

Fatal run-ins with boat hulls and propellers also claimed 64 manatees last year. “This is the No. 1 human-caused reason manatees die, but Defenders is working to make the waters safer for them by creating and expanding protected areas and designating and enforcing speed zones in manatee habitat,” adds Fleming.

With only 5,000 of these endangered animals left, every manatee counts.