Black-footed ferrets reintroduced to tribal lands in the West 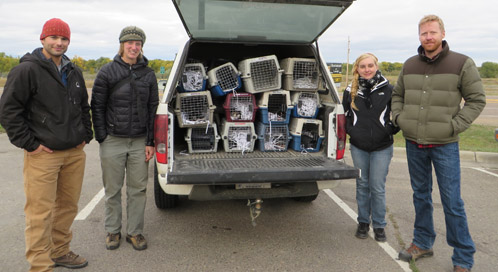 The pickup full of chattering black-footed ferrets arrives at the rendezvous site on Fort Belknap Indian Reservation in Montana on a brisk October afternoon. For these 32 ferrets, captive-bred and raised in Colorado, life in the wild is about to begin.

One of the most endangered mammals in North America, the black-footed ferret once numbered in the tens of thousands across the Great Plains and valleys of the Mountain States—from southern Canada to northern Mexico. But habitat destruction for cropland, exotic diseases and widespread poisoning of their prairie dog prey nearly wiped out this masked mustelid by the late 1970s. Only 18 individuals survived in the wild in 1984 when federal biologists gathered them up for captive breeding in a last-ditch effort to save the species.

This day’s relocation isn’t the first at Fort Belknap. Earlier reintroductions here in 1997 and 1998 failed after disease decimated the ferrets and prairie dogs. Since then, prairie dogs have rebounded on about 1,000 acres.

“It’s not enough space to maintain a ferret population for the long term,” says Kylie Paul, Defenders’ Rockies and Plains representative. “But we have great hope that as prairie dog colonies continue to expand so will the ferret population.”

About 50 miles away at the Charles M. Russell National Wildlife Refuge, where ferret reintroductions began in 1994, officials have found fewer than a half dozen ferrets, making success at Fort Belknap all the more important.

A healthy, sustainable black-footed ferret population requires more than 10,000 acres of prairie dog colonies. Ferrets not only prefer to prey on prairie dogs, but also claim prairie dog burrows for their own homes. That’s why biologists and wildlife conservationists—including Defenders’ Paul, Jonathan Proctor, Russ Talmo and Charlotte Conley—released these ferrets directly into or right next to active prairie dog burrows. “We want them to have the best shot at survival, so we’ll show them right away where they’ll have access to prey and shelter,” says Proctor, Defenders’ Rockies and Plains program director.

With prairie dogs missing from more than 95 percent of their former range and cattle ranchers continuing to poison them—claiming the prairie dogs compete with cattle for grass—the partnership with tribal members is crucial. “It takes the support of landowners, in this case the tribes, to allow sufficient prairie dog colonies to exist and serve as the prey for the ferrets,” says Conley, Defenders’ conservation associate working on coexistence issues. “Defenders’ efforts usually begin by helping land managers take steps to prevent plague and protect prairie dogs from shooting and poisoning.”

At Fort Belknap this summer, Defenders’ staff also helped map active prairie dog colonies to see if enough existed on the reservation to reintroduce the ferrets. “We were delighted to find out that the reintroduction could go forward,” says Proctor. “The protected prairie dog colony is in the heart of the Assiniboine and Gros Ventre tribes’ wild bison range, making this doubly exciting for those that want to restore some of the wild to the West.”

Protecting the habitat of black-footed ferrets and prairie dogs also helps more than 130 other plants and animals on the prairie, such as sage grouse and burrowing owls.

In total, about 500 black-footed ferrets currently live in the wild, thanks to reintroduction successes in Arizona, Colorado, Kansas, New Mexico, Montana, South Dakota, Utah, Wyoming and in Mexico and Canada.

To become a candidate for release, wildlife biologists expose captive-bred ferrets to prairie dog burrows and tunnels and watch to ensure the ferrets adapt to hunting in a natural setting. The animals are also subjected to the sounds of coyotes and hawks for the first time and monitored to confirm they react to their natural predators on the prairie.