On the 40th anniversary of the Endangered Species Act, these faces remind us that they matter 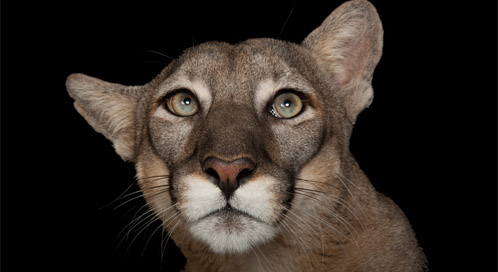 Flash back to the 1890s in Nebraska’s Platte River Valley. The man doesn’t look like much. He’s barely five feet tall, in his 20’s and of modest means. He’s had a big day though, and so he’s decided to spend his hard-earned money to have a formal studio portrait taken with his two prized possessions: a 10-gauge shotgun and the whooping crane he’s just killed with it.

Even then, the whooper was rare, and people knew it. Market hunters heavily targeted large birds, hoping to sell their oversized feathers for writing quills. The tallest of all North American birds paid dearly for it. In their darkest hour, whooper numbers would drop to just a handful of individuals.

But that was the Victorian era—a time when virtually no laws protected our nation’s wildlife. We know better now. Or do we?

More than 100 years later, wildlife is still under siege. Human population and its conjoined twin, resource consumption, bear down as never before on our remaining wilderness and the species within. The possibility of extinction looms as large as ever.

But all is certainly not lost: We have the Endangered Species Act (ESA). Forty years ago, the United States became the only nation on Earth to create a basic bill of rights for species other than our own. A public weary of rivers catching fire and toxins in breast milk had pushed Congress to protect the environment as never before, and the ESA was born, recognizing the right of existence for all creatures great and small.

For those of us who care deeply about the fate of “everything else,” we know that the ESA is often all that stands between human greed and extinction. Time and time again we hear the same, tired arguments pitting economics against species, such as the claim that jobs created by cutting down forests outweigh the life forms within it. In fact, the opposite is true. Without ecology, there is no economy.

In my 20-plus years photographing with National Geographic magazine, I have documented a world driven by money, greed and fear. I have seen local efforts to protect species fail time and again because developers simply have too much money and power in their hometowns to be stopped or even slowed. The rarity of a species doesn’t mean much at all to those who build shopping malls, housing developments and pipelines, nor to the politicians that they slip into office to do their bidding. The ESA then, is our conscience, ensuring we do what’s right for the natural world. But is it enough in the long run?

It’s a good start. And it’s vital to our own continued existence. When we save species, we’re actually saving ourselves. We need pollinating insects to produce crops. We need healthy forests to regulate rainfall and keep our air and water clean. And there is no time to lose.

With so many of us now living in cities rather than in rural areas, there is a disconnection from nature. How do I impart the tragic loss of an amphibian, for example, when there’s so much else competing for our attention? It takes an educated, energetic populace to preserve what we have left—both the species themselves and the laws that protect them.

For my part, I started The Photo Ark, a 20-year project to make studio-style portraits of as many species as I can to get the public to look these creatures in the eye and care while there’s still time to save them.

For most of the world’s species, it is not too late. We just need to pay attention and take action. Perhaps this Victorian-era hunter did us an inadvertent favor: With fewer than 600 whooping cranes left on Earth today—even with protections, this photo reminds us how much worse things could be, for all of us.

Step Up for Species

Every time you open your wallet, you’re saying to a retailer, “I approve of what this was made from, the distance it shipped, and I want you to do it again and again.” The power of the dollar is real, and it moves mountains if enough people pay attention. What kind of wood is that made of? Do you eat locally grown fruits and veggies? Is that packaging necessary? Have you bought a smaller car that you drive less? No one person can save the world, but each of us can have a meaningful impact. Many of the species featured in The Photo Ark can be saved, but it will take people with passion to step up. Some species need only a little atten­tion. Others range globally and will be harder to protect. Every bit of effort helps though, and awareness of the problem is the first step toward a solution.