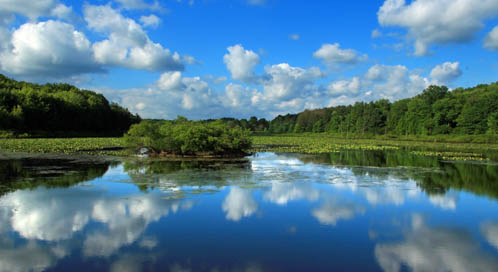 Oil-slicked open waste ponds…abandoned storage tanks…55-gallon drums oozing toxic chemicals. Sounds like a survey of a Hazmat site, but all of these environmental hazards associated with the unchecked activities of private oil and gas operations are actually found on some of our national wildlife refuges, says Noah Matson, Defenders’ vice president of landscape conservation and climate adaptation.

The world’s largest system of protected areas dedicated primarily to wildlife conservation, our National Wildlife Refuge System totals some 150 million acres. Yet more than 200 refuges have existing oil and gas infrastructure in place—with active wells on 103.

In many places around the country, surface rights are split from valuable mineral rights below the land. Rarely can the U.S. Fish and Wildlife Service (FWS), overseer of the refuge system, afford to purchase these rights for protection and, under the constitution, FWS must allow access to private property—even if it is underground.

But FWS does have the authority to manage access, and in February it announced a proposal to develop new regulations.

“There is simply no reason our national refuges and the wildlife they support must suffer because of a gross lack of regulations,” says Matson. “There is no question that the unchecked activities of private oil and gas operations on refuges have gone on way too long.

When combined, “isolated” oil leaks can be just as dangerous as the large, infamous oil spills that garner media attention. A recent FWS study on two refuges in Louisiana found that “levels of oil contamination near oil and gas facilities are lethal to most species of wildlife, even though refuge staff were not aware of any large spills.”

“When I testified before the House subcommittee, I presented some harrowing images that showed leaky oil pipes that had been ‘fixed’ using plastic bags and duct tape,” says Matson. “Needless to say, I was shocked to hear Rep. Vance McAllister (R-La.) say he thought the operator had shown ‘initiative’ and that it was an ‘innovative’ solution. It is this kind of attitude that is preventing real improvements in our refuges and wildlife and costing taxpayers millions of dollars in damages and cleanup bills.”

The struggles of our national wildlife refuges are all the more alarming because they support more than 380 of the nation’s 1,311 endangered or threatened species. In fact, many of our refuges, such as the Florida Panther National Wildlife Refuge, were established to help in the recovery of specific species. But funding cuts make this even harder.

The refuge system needs at least $900 million in its annual budget, according to a new report by the Cooperative Alliance for Refuge Enhancement (CARE). But the highest annual funding ever was $503 million in 2010.

“Each year the refuge system is underfunded means lost opportunities to help endangered species, educate the public and maintain our nation’s wild places for future generations,” says Defenders’ Noah Matson. “We need to step up refuge funding before it’s too late.”

Collectively called great whales because of their size, baleen and sperm whales are great for another huge reason: They are the ocean’s ecosystem engineers.

These whales have a powerful and positive influence on the function of oceans, global carbon storage and the health of commercial fisheries, according to a new study by University of Vermont biologists.

As great whales travel between their feeding and calving areas eating fish and other invertebrates, they distribute nutrients through the water for thousands of miles. When they die, even their sinking carcasses provide habitat for many species that only exist on these “whale falls.” But commercial whaling dramatically reduced the worldwide population of these food web engineers.

“The decline in great whale numbers, estimated to be at least 66 percent and perhaps as high as 90 percent, has likely altered the structure and function of the oceans,” says conservation biologist Joe Roman. “But recovery is possible and in many cases is already underway.”

The biologists believe that continued recovery of the great whales may help buffer marine ecosystems from the destabilizing stresses of rising temperatures and ocean acidification caused by climate change.