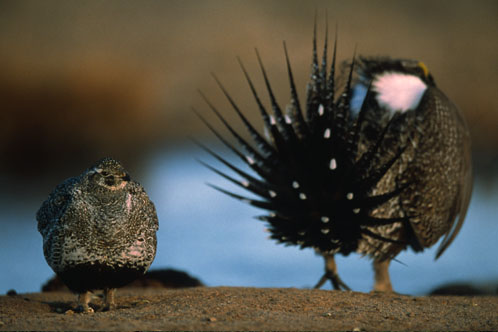 A male greater sage grouse fans his long, black tail feathers against the grayish-green sagebrush, puffs out his chest, flutters his wings and emits a most unique sound: “swish-swish coo-oo poink!” Hens attending the flamboyant display hardly notice, and so he repeats himself—again and again.

So goes the sage-grouse mating dance, one of the most colorful natural history pageants in the West. But this age-old ritual—which can still be seen in 11 western states—may be in jeopardy, according to recent analyses by Defenders of Wildlife.

The U.S. Fish and Wildlife Service announced in 2011 that it will consider sage grouse for protection under the Endangered Species Act in 2015, prompting the Bureau of Land Management and the Forest Service to develop new conservation plans to stave off federal listing.

“The problem is the proposed plans are far from adequate and are not based on the best available science,” says Mark Salvo, Defenders’ director of federal lands conservation.

Once numbering as many as 16 million, the grouse have been hit hard by development and other harmful land uses. Today only about 200,000 to 300,000 remain in the West.

The loss and degradation of sagebrush habitat also spells trouble for more than 350 other species that depend on the Sagebrush Sea for survival.

Defenders analyzed draft plans for conserving sage grouse in 15 different areas spanning 10 western states and including 60 million acres of public land. “When laid side by side, the 15 draft plans proposed inadequate and inconsistent conservation strategies for sage grouse, sometimes treating the same population of grouse very differently depending on which side of an arbitrary boundary the grouse happen to reside,” says Salvo.

Federal planners are now incorporating Defenders’ analyses into the draft plans with the goal of improving conservation measures.

“We look forward to seeing the final plans, which are due in autumn 2014,” says Salvo. “A lot of hard work has been invested in developing a successful management scheme for sage grouse. Federal agencies can still adopt final plans—not the current inadequate proposals—that will conserve and restore sage grouse and transform how vast areas of our public lands are managed.”

Home to about 37 percent of remaining sage-grouse populations, Wyoming was the first state to develop a “core area” strategy for conserving the birds and has promoted its plan as a model for other federal agencies and states to follow. The trouble is many key components of the Wyoming strategy are not in accord with what we know about sage-grouse biology and could contribute to the continued decline of the species, according to “The Core Problem,” a new report by Defenders of Wildlife. 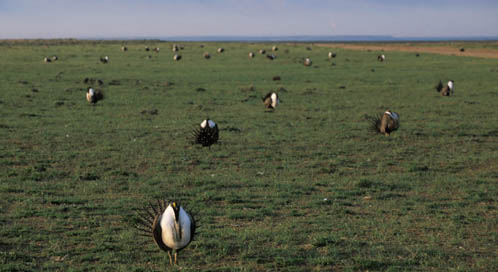 For example, the state’s plan allows new oil- and gas-leasing and other development within core sage-grouse habitat, contrary to scientific recommendations, while prescribing inadequate protections for important seasonal habitats and allowing excessively high levels of disturbance in critical areas.

“The proposed 0.6 mile buffer between sage-grouse mating grounds—called leks—and new development is six times smaller than that recommended by the best available science,” says Defenders’ Mark Salvo, the report’s author. Most hens nest and raise their young within four miles of the lek where they mated.

The Wyoming plan also focuses on oil and gas and other development without addressing additional threats to the grouse, such as grazing livestock, invasive weeds and off-road vehicles.

Defenders is working to ensure that the Bureau of Land Management—the federal agency that oversees most of the core areas for sage grouse—and other states avoid adopting Wyoming’s strategy and instead implement science-based measures that are more likely to protect and recover the species.

“It’s Conservation 101—protecting species requires a comprehensive planning approach that secures habitat and effectively manages harmful land uses,” Salvo says. “Simply tweaking existing land-use management in minor ways will not save the sage grouse or the many other species that depend on the Sagebrush Sea to survive.”