The 2020 end-of-year count of wild Mexican wolves has been completed and the results show that the population grew by 14% over last year to a total of 186 wolves - higher than it’s been since reintroduction. This success is, in large part, due to the hard work of amazing technicians working on Mexican gray wolf recovery efforts. These dedicated volunteers are instrumental in every step of the process, from field camera monitoring to helicopter counts to one of the most successful pup cross-fostering events to date! To make this happen, Defenders coordinates with the Mexican Wolf Interagency Field Team to support a wildlife technician program, in which recent college graduates with experience in biology and wildlife management help the U.S. Fish and Wildlife Service and Arizona Game and Fish Department to monitor wolves and implement conflict-reduction tools and techniques to give our lobos the greatest chance of success in the wild. Many of these Defenders-sponsored wildlife techs started their time with the program last fall, and we're excited to learn more about their winter/spring activities in the next installment of Field Notes! 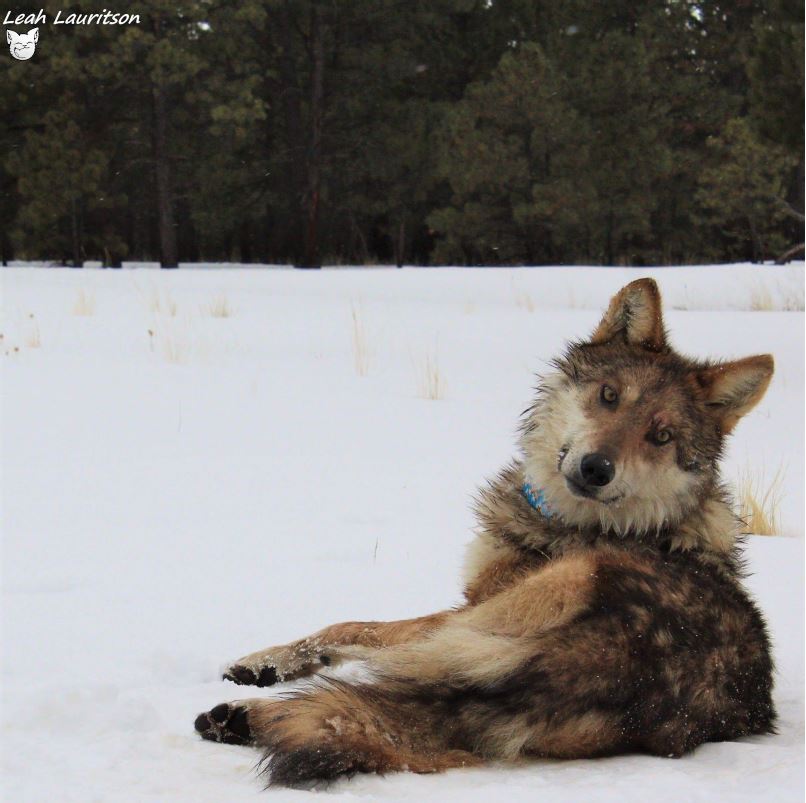 Eventful – the word that comes to mind when reflecting on my experiences so far in my first month of being a Mexican Wolf Recovery wildlife technician. In these seemingly short few weeks, I have been involved with getting to know a vast array of processes and routines that make the Mexican Wolf Project run. Wolf activity in the form of tracks, scat, depredations, and radio telemetry signals indicate that wolves do in fact live out here on the New Mexico landscape. Though a little daunting at first glance, once out in the field, the little details that go into preparation and data collection start to come together, finally allowing one to see the recovery process as a whole instead of seeing only the multitude of little steps.

Nothing says stereotypical spooky like camping out tracking wolves on the Mogollon Rim with a full moon on Halloween and wolf howls. It comes with the job, I guess. We went out investigating a potential tip from a local agency that they had heard wolf howling. While camped I had the amazing experience of being able to see a sunset, sunrise, and full moon all while perched from the top of the Mogollon Rim. Before setting up camp the first night, we choose to try some howling ourselves. I have to believe that it's my poor excuse of a wolf howl that deterred the wolves from responding and not the idea that maybe they didn’t want to - it was a first for me and I promise to practice for future attempts.

When tracking and looking for wolf signs, especially in new areas, there are a few main tactics we employ. We can perform what are called howling surveys at night. These are, much like they sound, surveys in which you mimic a wolf howl in order to illicit a response. Once a response is received, you record the direction of the response and the number of distinct individuals that responded in order to get an idea of both animal location and number of individuals.

The next tactic we employ is sign search. This includes all signs that an individual or group of wolves could leave behind. Tracks and scat are the two most commonly looked for signs that wolves are in the area. If potential wolf scat is found, a sample is then acquired to send back to the lab for DNA species confirmation. Lastly, trail cams with carnivore bait are placed in locations wolves are likely to travel in order to capture photo and/or video evidence that wolves have in fact began to colonize the area.

I can't believe I’m back! I’ve been camped out in a trailer to stay close to the action and I couldn’t be happier. My days start with driving to the nearest hill to check for messages and updates from the team and to listen for radio collar signals. Once I catch up with messages, I’ll spend the morning triangulating signals to get a good idea of wolf locations before they start moving around for the night. Luckily wolves don’t move around all that much during the day so as long as they aren’t near any cows, I can usually leave them where they are. After this I’ll take a quick pass through the pasture to check on the cows and to get an idea of where they are and compare that to the wolf locations.

I locate wolves during the day and place them on a topographic map. Then while eating lunch or during my early afternoon down time I study the maps and wolf locations. I’m trying to predict how these wolves will move across the landscape. I ask myself, why are the wolves staying in that spot during the day? What is safe or beneficial about it? What avenues do the wolves have to approach the cows? What are they thinking and why? If I can understand these questions from the wolves' point of view, I can better predict movement and behavior.

This past month I spent much of my time attempting to get counts on the number of individuals within packs. The first pack I attempted this on was the Lava pack. I only saw two wolves during my initial scan but knew there had to be at least one more as I hadn’t spotted both the collared individuals.

After discussing with the biologist and learning there were likely pups hidden somewhere that I missed I went back out to the same spot the next day. As I was just getting to the edge of the ridge, I was turned scanning the adjacent hillside for any sign of wolves as I was picking up the signal of both adults just over it and onto private property. As I turned back, I was surprised to see a wolf pup staring back at me from about thirty feet away. I froze but I had already been spotted, it ran back down the ridge out of sight. As I rushed up to the edge of the ridge, I saw three pups and a sub adult all running away from me and back over the ridge towards where the adult collars could be heard. As they moved over the ridge and out of sight onto private property, I began to hear a chorus of howls coming from where the entire pack now was. I updated the biologist with what I had seen and we felt confident that over the course of the two nights I had likely spotted all the members of the Lava pack.

First and foremost, I am here because I have a passion for endangered species recovery, and carnivores’ ecosystem roles. I see it as a project I can both understand and make an impact towards the full recovery of the Mexican gray wolf and better social tolerance of large predators.

Yet I also really enjoy being able to travel around, see all the different landscapes, meet all sorts of different people whether locals or tourists in the areas I go. This includes meeting all the different biologists whether for the state, federal government, or tribes. They each help me see the work in slightly different ways. Coming into this position, I was really excited about the opportunity to work with wolves as an idea. Now that I am here, I am coming to really enjoy what it means in practice.

I was driving a mountain road in the Gila National Forest that was built into the edge of a cliff and hugged the steep slope. My goal was to get a count on Colibri, a wolf pack that lived in this area of the national forest. To get the count, I was to use telemetry signals emitted from the wolves’ radio collars, look for tracks, and listen for howls during the evening twilight. I was also supposed to get a visual of the wolves, if possible.

I decided to climb up the canyon to an elevated point. During one particular break my eyes gazed up the hill and for a brief moment I saw a pointy face peer over a rocky ledge. The face was that of a wolf. His fur was grey and he had curious eyes. His mouth was open and his lips curled up, making it appear as if he were smiling. He was only about fifty feet above me. And then he vanished. The pack was on to me. I only had moments to get a visual, before the wolves dispersed into the refuge of vegetation. I ran up the mountainside as quickly as possible. When I got to the rocky ledge the wolves were already fleeing. Two of them were trotting up a slope, looking back occasionally. Two others made their escape by navigating along a steep hillside trail. I grabbed for my binoculars to see which ones had collars, but by the time I held them up to my eyes the wolves were gone. They had vanished into the dense undergrowth. “Four,” I said to myself. “I got a count of four.”

My mind went back to nature programs I used to watch as a kid. Where biologists were seen observing wildlife in their natural habitat. My experience was the opposite of that. It was frantic, rushed and filled with adrenaline. The process wasn’t nearly as clean as the nature videos would suggest, but I had to go easy on myself. After all, I’m working on a real-life wolf project. And I feel very fortunate.

December was filled with more ground counts, a captive facility capture, and my first involvement with the capture of a wild wolf. One night in December Ed Davis, a wildlife biologist on the project, called me and said I needed to head back to the office because a wolf was in a trap. After prepping equipment and rendezvousing with more personnel, we headed out to the capture site and arrived as the sun was setting. Working safely and efficiently, we processed the wolf and loaded her in a crate – she came with us to the vet. The veterinarian looked at her the next day, patched up her foot, and she was held for observation for a few more days to make sure she recovered. She was then taken back to the wild and released with a new collar and a new story to tell. Three months has flown by on this project and it has been such an awesome experience. Interacting with wild animals in wild spaces is a dream come true.

There’s nothing like that first snow of the season. Things get colder a few days before and you know it's coming. I always love to remember where I am on those days. It always seems like a significant milestone in wrapping up the year for me. This year I happened to be in my work truck way out in the Gila National Forest. I had been dealing with a particularly insistent wolf pack, Iron Creek, and trying the keep them from a number of yearling calves before they shipped off in the coming week. These wolves would run me up, down, and all around the canyons on the side of that mountain but I didn’t mind.

The night of first snow was so still that it fell into a perfect blanket over the whole mountain.  Everywhere I looked, I saw animal tracks. I found everything from tiny mice, elk, sheep, foxes, and even wolf tracks. Once I got my telemetry signals and knew the wolves were at bay and the cows safe, I spent the rest of the night driving around looking and learning about the movements and life the forest has that we try so hard to find.