Prairie dogs are considered a “keystone” species because their colonies create islands of habitat that benefit approximately 150 other species.

They are also a food source for many animals, including mountain plover, burrowing owl, Ferruginous hawks, swift fox and endangered black-footed ferrets. Many species, like black-footed ferrets, use their burrows as homes. Prairie dogs even help aerate and fertilize the soil, allowing a greater diversity of plants to thrive. But the widespread destruction of prairie dog colonies and the arrival of the exotic disease plague in the 1900s reduced prairie dogs by more than 95 percent.

Poisoning prairie dogs can be bad for the environment with impacts to native grassland birds, it is expensive, and rarely offers a long-term solution to conflicts with livestock operations. Defenders is working with national grasslands on nonlethal alternatives to poisoning.

Because prairie dogs hesitate to make homes in or go through tall grass, creating tall-grass buffers between prairie dog colonies and adjacent private properties is one way to keep prairie dogs out of where they are not wanted without resorting to killing them. Growing tall grass is difficult in areas frequented by grazing livestock, so Defenders has purchased and installed several miles of solar-powered portable electric fencing along buffer areas to keep livestock out, allowing the grass to grow tall.

Defenders also promotes relocation rather than poisoning of prairie dogs from conflict areas to core areas that are fully protected. We have helped move hundreds of prairie dogs out of harm’s way and we hand-dig starter burrows to promote new colonies.

Black-tailed prairie dog colonies were once found across the Great Plains from southern Canada to northern Mexico. Today their small, scattered colonies occupy only 1-2 million acres. They were eradicated completely from Arizona but were recently reintroduced to that state in one small area.

Black-tailed prairie dogs once numbered in the hundreds of millions – maybe even over a billion. But their numbers have decreased by over 95%. Today, they may number around 10-20 million.

Prairie dogs are colonial animals that live in complex networks of tunnels with multiple openings. The tunnels contain separate "rooms" for sleeping, rearing young, storing food and eliminating waste. Prairie dogs are very social and live in closely-knit family groups called "coteries." Coteries usually contain an adult male, one or more adult females and their young offspring. These coteries are grouped together into wards (or neighborhoods) and several wards make up a colony or town. Prairie dogs have a complex system of communication that includes a variety of pitched warning barks that signal different types of predators. 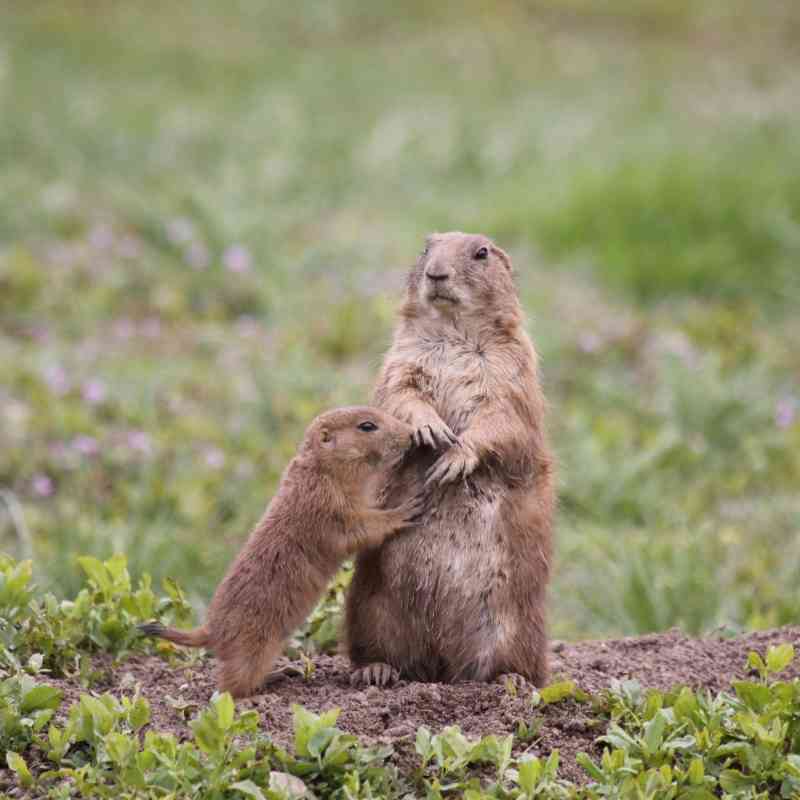 END_OF_DOCUMENT_TOKEN_TO_BE_REPLACED

Read More About the Prairie Dog