The 2020 end-of-year count of wild Mexican wolves has been completed and the results show that the population grew by 14% over last year to a total of 186 wolves - higher than it’s been since reintroduction. While we remain concerned about high rates of illegal mortality and agency-ordered lethal removals, the continued growth of the wild population is a success, which is largely due to the hard work of amazing field technicians working on Mexican gray wolf recovery efforts. These dedicated volunteers are instrumental in every step of the process, from field camera monitoring to helicopter counts to one of the most successful pup cross-fostering events to date! To make this happen, Defenders coordinates with the Mexican Wolf Interagency Field Team to support a wildlife technician program, in which recent college graduates with experience in biology and wildlife management help the U.S. Fish and Wildlife Service and Arizona Game and Fish Department to monitor wolves and implement conflict-reduction tools and techniques to give our lobos the greatest chance of success in the wild. Many of these Defenders-sponsored wildlife techs started their time with the program last fall.  In addition to constantly monitoring wolves and taking steps to avoid conflicts with livestock, several of the techs were also able to assist with the annual population count.  We're excited to learn more about their most recent activities in this installment of Field Notes!

The first month of the year started with continuing ground counts and ended with me doing uncollared sign search. That is searching areas that do not have documented pack activity and looking for wolf sign, including: tracks, scat or pictures on cameras. This sometimes involves driving or walking forest roads covered in fresh snow and looking for tracks. I often set up cameras near any sign I suspect might be wolf, because even if I have a feeling it is just dog or large coyote tracks in soft substrate, I would rather get pictures of the wrong canine than miss a potential uncollared wolf. A rough day in the field for me included getting my truck stuck on a sloppy road during the freezing and thawing, snowing and melting, that characterizes this part of the Southwest. During this month I have found fresh tracks and captured wolves, coyotes, foxes, dogs and mountain lions on camera. I have seen pretty sunrises and sunsets, snowy days and beautiful mountain views. This is a magical part of the world to be in and a wonderful project to be a part of. Thank you for your time and support. 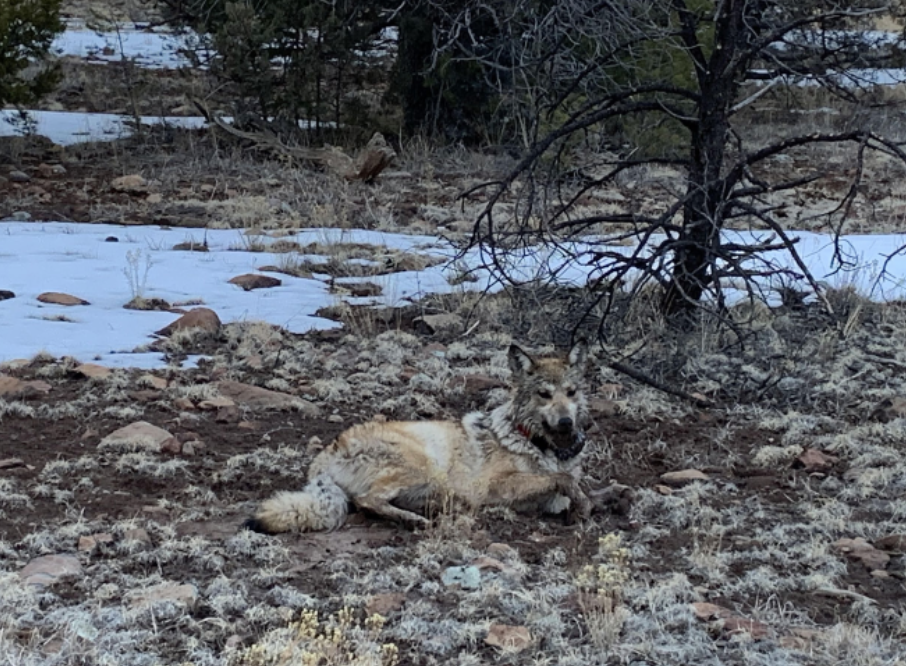 Within a short time, we heard of the communications that they were headed back to us with the Alpha female of the Luna Pack. We quickly ran out and got her from the helicopter crew and began processing. We fitted her with a new collar, took body and teeth measurements, gave her vaccinations, drew some blood, and continuously monitored her vitals. All that was left after the quick processing was to take her back out to where the rest of her pack was and wait around till, she fully woke back up and could walk away on her own.

Another volunteer and I were assigned to the release portion of her processing. What had been a short flight for the helicopter took us nearly two hours to complete. We continuously pulled over and checked on her throughout our journey back into her pack territory. By the time we got out to the release site she had almost fully woken up and gotten her feet under her. As we watched her slowly walk away, I could hear the very faint sound of the rest of her pack howling in the direction she was travelling.

January has flown by, as most months do while working on a recovery program that brings excitement and great scenery to most days. At this point, I have honed my trail camera and uncollared sign search skills, but each day brings a new learning opportunity. I have participated in several captures at our captive breeding facility, meeting new personalities each time I attend. I have had many adventures looking for wolves to get ground counts, and hopefully my previous blog posts have illustrated the joy I get from this activity.
My sign searching adventures into Arizona have given me new perspective into how much, or how little, land the wolves have available to them to thrive. When I say how much land they have available to thrive, I think of the countless miles of New Mexico roads I have driven searching for wolves – it seems so expansive! When I say how little is available to them, I think of how much of that landscape is truly suitable, accessible habitat. I think of the limitations that humans impose onto the wolves, forcing them to occupy the habitat we have allocated for them. I often hear “wolves would recover on their own if we just let them.” I have come to believe this saying because without the politics and public relations side of it, the wolves would occupy any habitat that satisfied their basic needs. Westward, they would go!

Working alongside the Mexican Wolf has cultivated compassion and sympathy for their struggle. I cheer for them every day. Every track I report or camera I put up increases our knowledge of this endangered species, giving biologists more ammo for their recovery pistols. These wolves are undoubtedly still facing adversity at every turn, and 163 animals is still very few for an entire subspecies, but seeing their numbers swell brings a smile to many wolf-lovers. I will continue contributing to Mexican Wolf recovery over the next two months, and hope my efforts prove fruitful. 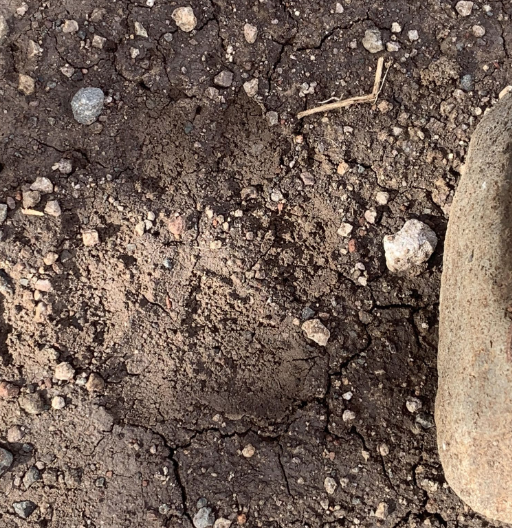 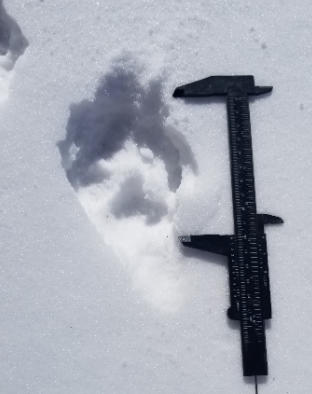 In the beginning of February, the wolf program was finishing up helicopter operations. I was primarily on ground crew during these last few days in case there were wolves to process at our ground site. I did really enjoy spending time with the biologists and interns and getting more acquainted with those whom I interact with less frequently. I had one instance where I was called to check up on a wolf that was processed. I met the helicopter crew in Collins Park –a central hub in my biologist’s territory where the helicopter crew captured a member of the Pitchfork pack. I made sure the wolf recovered safely and escorted him to the nearest tree line for his safety. The nearest tree line was about 2 ½ miles away to the west. I tried to direct him away from other roads and fences. Eventually, he got to the point where he was running well, so I had to also pick up the pace to direct him where I wanted him to go. Shortly after getting him to the tree line, I got a call on my handheld radio that I had to release a wolf that was captured earlier before it got dark. I had to run all the way back to my truck to get to the release site on time.

Besides a couple post-helicopter operations cleanup days at the office, I have been spending my time making sure wolves stay out of cow pastures So far, my presence alone has kept the wolves out of the pasture's cows are in. Contrary to popular belief, wolves are fairly skittish –at least when humans are involved. I hope my continued presence in that area deters the wolves from entering even after I’m gone. Only time will tell if that’s just wishful thinking. 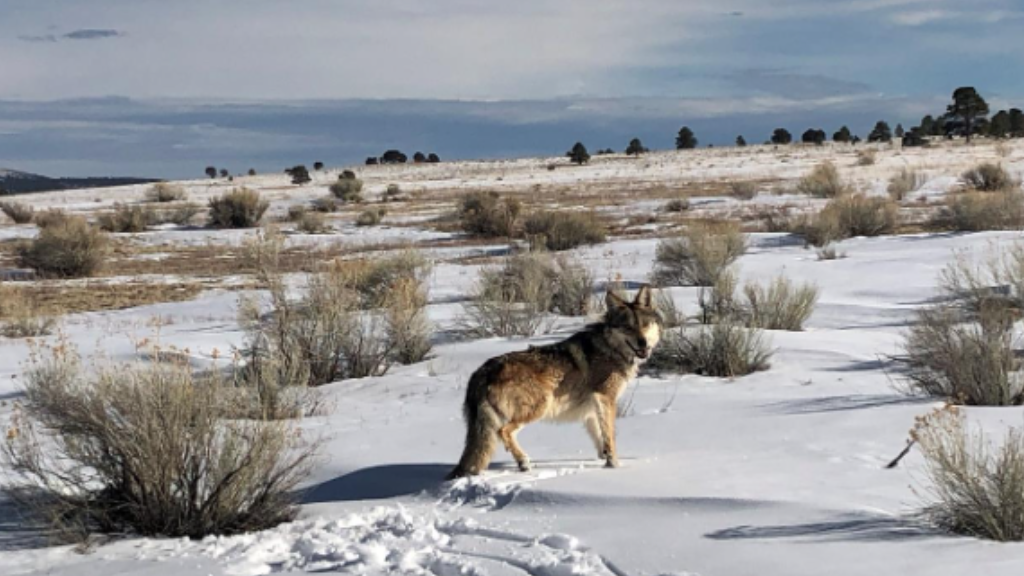 Well, my time as a Range rider has come and gone. I’m pretty sad to go actually. That was a fantastic gig! I feel like I was able to truly work with the wolves pretty close and make at least a little change. I loved seeing the behavioral patterns of these wolves after pushing them away from conflict areas and working with them for the last few months. Many of their actions were unexpected. After pushing them for a few weeks there always seemed to be a breaking point where the wolves would come to understand what I was trying to do. Once this point happened, I wouldn’t need to really do much at all to keep them out of a pasture or away from cows. I’m excited to see what may come of this in the future of non-lethal predator management. In my new position as a non-lethal wolf specialist for Catron County I’m hoping for the opportunity to expand on what I saw as a range rider and contribute to the growing body of non-lethal predator management research. Viva los lobos! 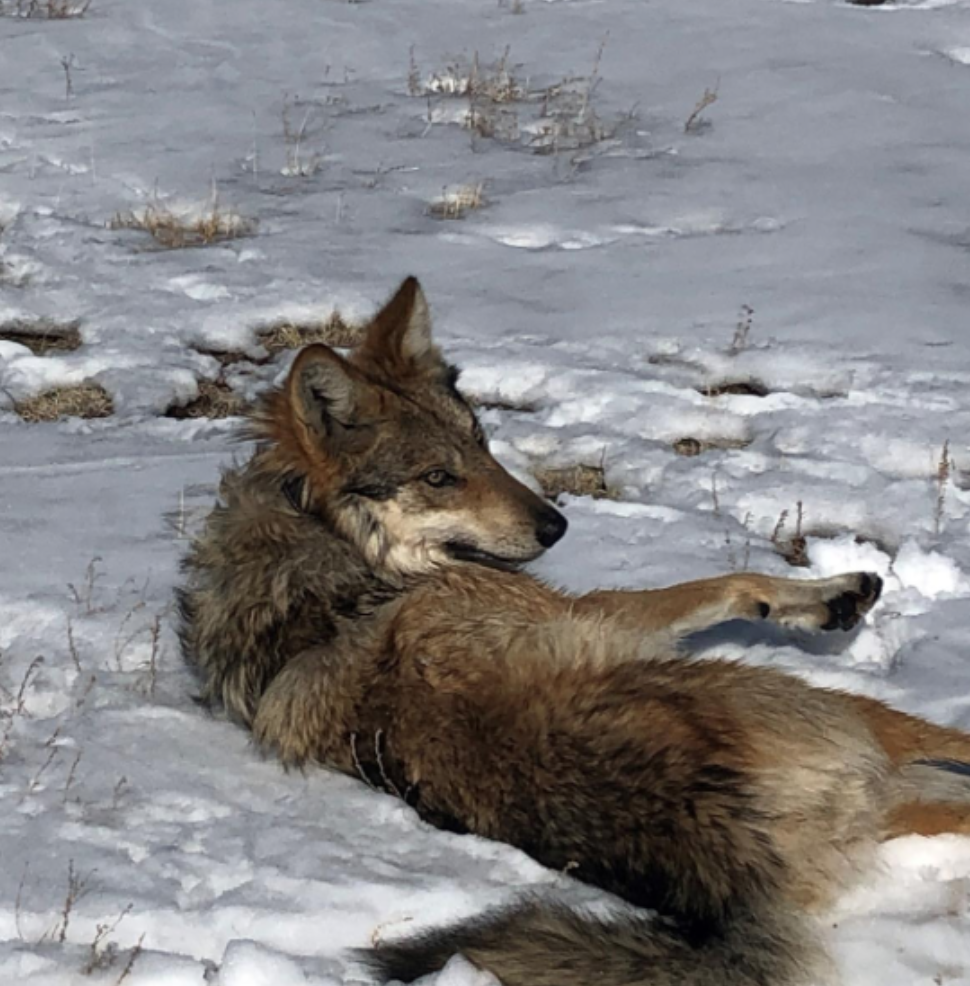 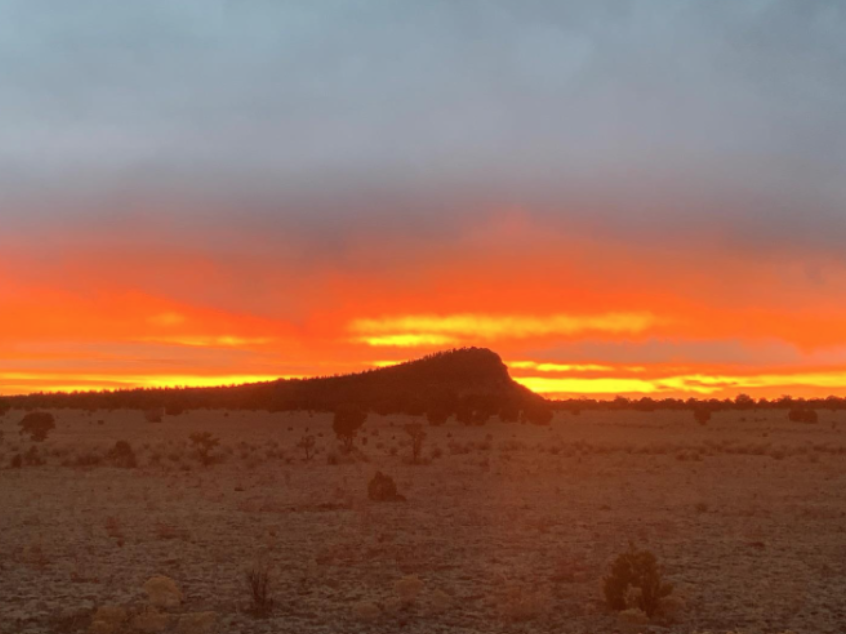 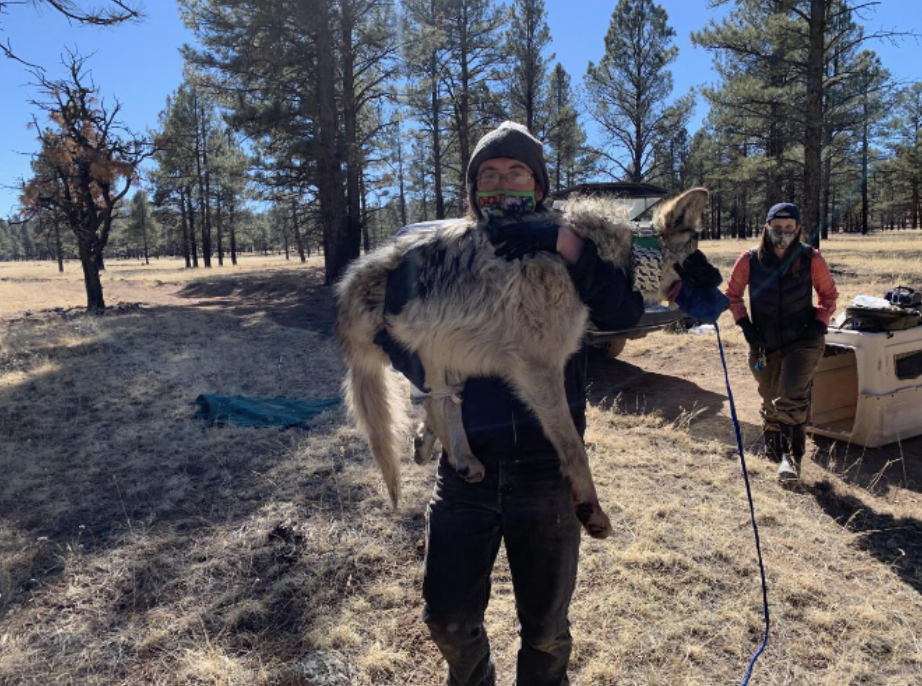 1681 was the alpha male of the Whiskey Creek Pack. I first came to know him while stocking the food cache for the pack. I would watch him through video footage captured on a strategically placed trail camera. He came to the cache almost daily. At first, 1681 was timid, sniffing at the large sticks covering the meat underneath. The covering served to keep the ravenous ravens and turkey vultures at bay. He soon became bolder and began pawing at the sticks. After a couple weeks, he felt comfortable enough to yank off the sticks and consume the hidden meat. Throughout the past summer, I had gotten to know 1681 through observing his trail camera photos, watching his videos, and seeing his five pups emerge on camera. The camera footage was a brief glimpse into the word of Whiskey Creek. I even got to help collar one of his pups, a small male known as 2556.

So, I was saddened to hear this month that 1681’s collar was giving off a mortality signal. This is a signal that’s emitted if the wolf hasn’t moved for a certain length of time. There is a notion in the world of wildlife biology that gaining emotional attachments to the animals that we study is a bad thing. Considering the personalities and emotions of wildlife gives as a unique window into animal behavior and perhaps allows biologist to better understand how creatures operate. This in turn would allow for better management strategies. Therefore, I see nothing wrong with having empathy for the animal species we study and manage. After all, it’s only natural to care about them.

The next day, I was driving through cattle pastures, while listen for various wolves on my receiver and heard beeping. I casually looked at my receiver and saw that the signal belonged to 2556, the pup of 1681. The signal was coming from Fox Mountain. There were no cows in that area, so he was in a good spot. I looked out the window of my truck in the direction of the mountain. I took comfort in the fact that while 1681 may no longer wander the area, the pack he started, Whiskey Creek, is still going strong. 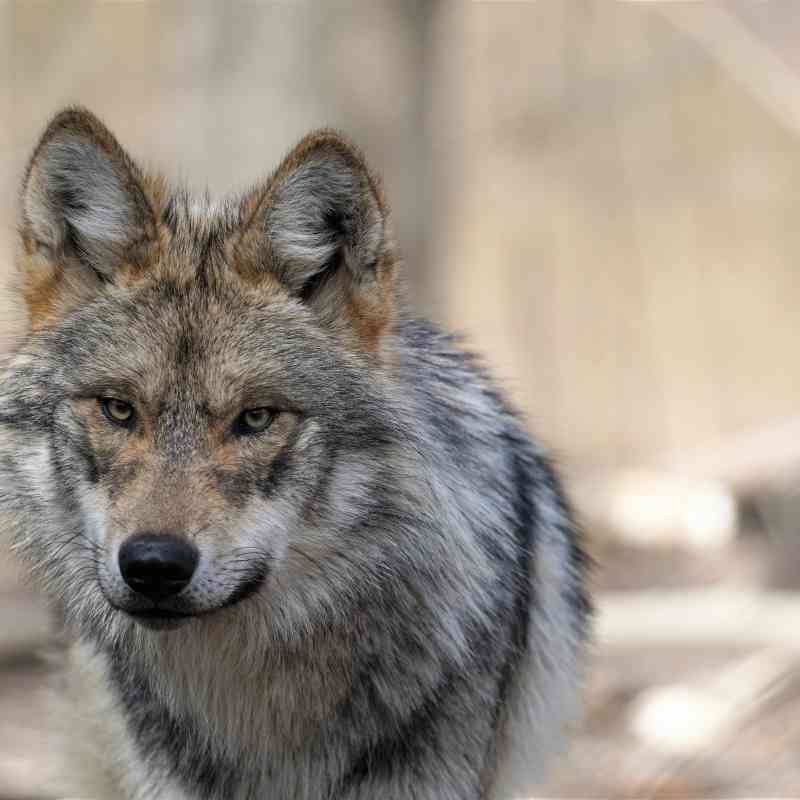