Grizzly bears are icons of American Wilderness. While seeing one of these magnificent creatures in the wild—from a distance—can be an exciting experience, it’s important to know the appropriate precautions to take so you can navigate safely in bear country. Knowing how to interpret bear behavior and act responsibly enhances your visit and is part of sharing our landscapes with wildlife.

Tips to Bear in Mind in Bear Country:

Be alert. Don’t wear headphones and zone out. It’s important to remain vigilant and aware of your surroundings. Keep an eye out for bear sign like scat or tracks. A top reason for bear encounters is usually surprise.

Make noise. The human voice is the most effective way to alert a bear you are there. Sing, clap or occasionally call out and say “Hey bear!”. Make it fun! Also, always make noise when approaching blind corners and be a little louder near streams.

Minimize dawn, dusk, and after dark activities when bears are more active.

Travel with a partner or in a group and stick together. Bears tend to avoid groups of people.

Always carry bear spray and know how to use it. This applies for anyone in bear country. Studies have found that bear spray deterred aggressive bears in 98 percent of recorded cases. Keep bear spray easily accessible, in a quick draw holster, not in your bag. Know how to use it—you may have only seconds to do so. It can be very helpful to purchase and practice with inert training canisters.

Living or working in areas of abundant locally seasonal bear food sources, such as berry patches and salmon streams, could increase the chance of an encounter. When possible, avoid these areas. If you are out in these areas be especially vigilant and aware of your surroundings. Have your bear spray readily accessible, travel in groups and make noise at regular intervals.

Read up on local regulations and news. Know the requirements for food storage and if there are any recent reports of bear encounters. There may be areas that are closed due to bear activity or areas that you want to avoid.

Be especially alert when running or biking in bear country. Trail running and mountain biking in bear requires additional precautions because you’re moving much faster and often quieter. Make noise periodically and especially while approaching blind corners or where it is difficult to see the trail ahead of you and remain mindful of your speed.

If you encounter a bear, know how to react. Learn more here.

Get Your Bearings: Grizzly Bear or Black Bear?

It’s important to be able to tell grizzly bears and black bears apart, as the best way to approach bear encounters differs between each species. Identifying bear species in the wild can be more challenging than you think, as size is relative and both black and grizzly bears range in color from black to blond. 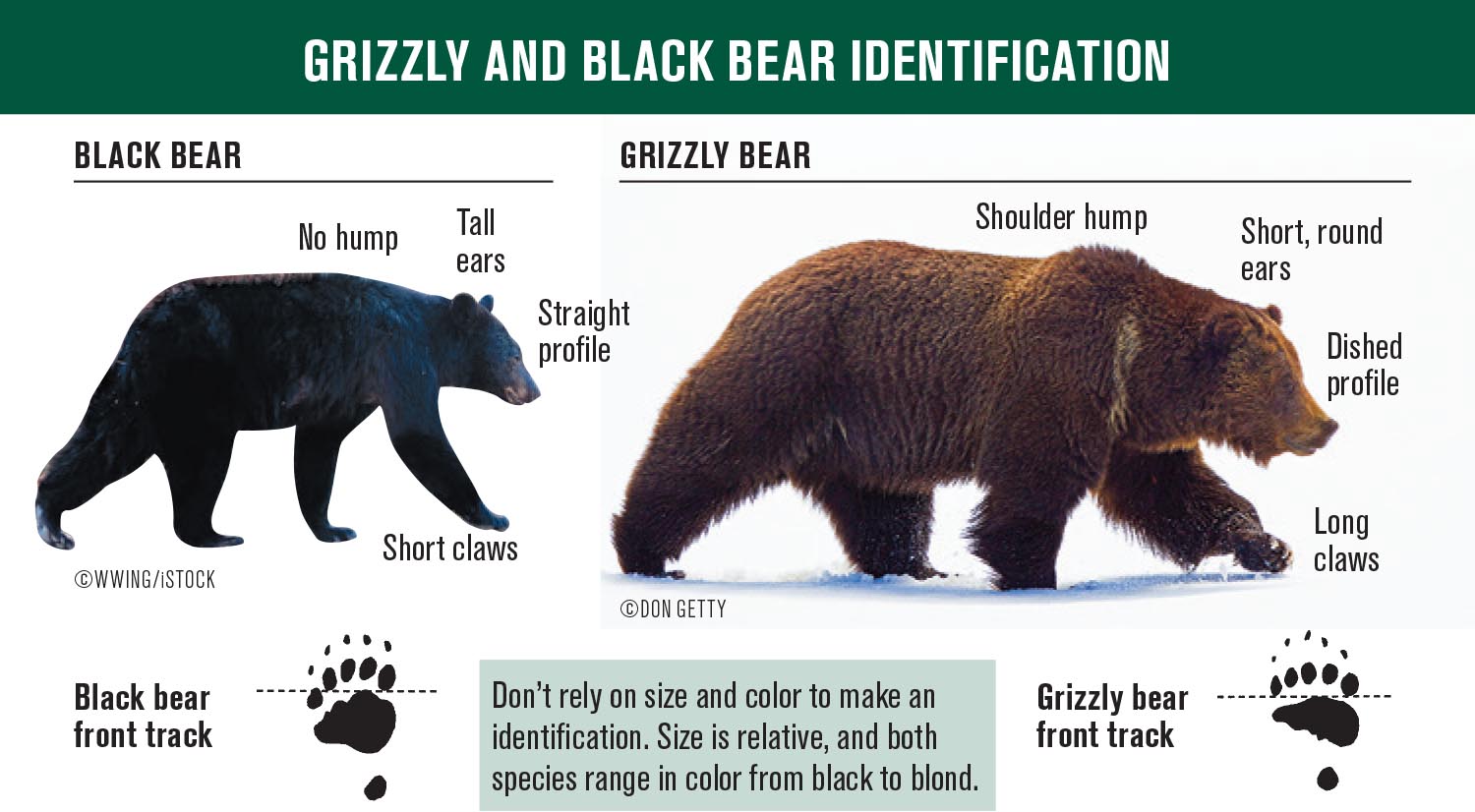 Which Bears Live Near Me?

North America is home to both black and grizzly bears. The range of black bears is widespread, reaching from the east to the west coast of the United States and north into Canada and Alaska, with populations as far south as Mexico and South Florida.

Grizzlies inhabit Canada and Alaska, as well as parts of Wyoming, Montana, Idaho and Washington. 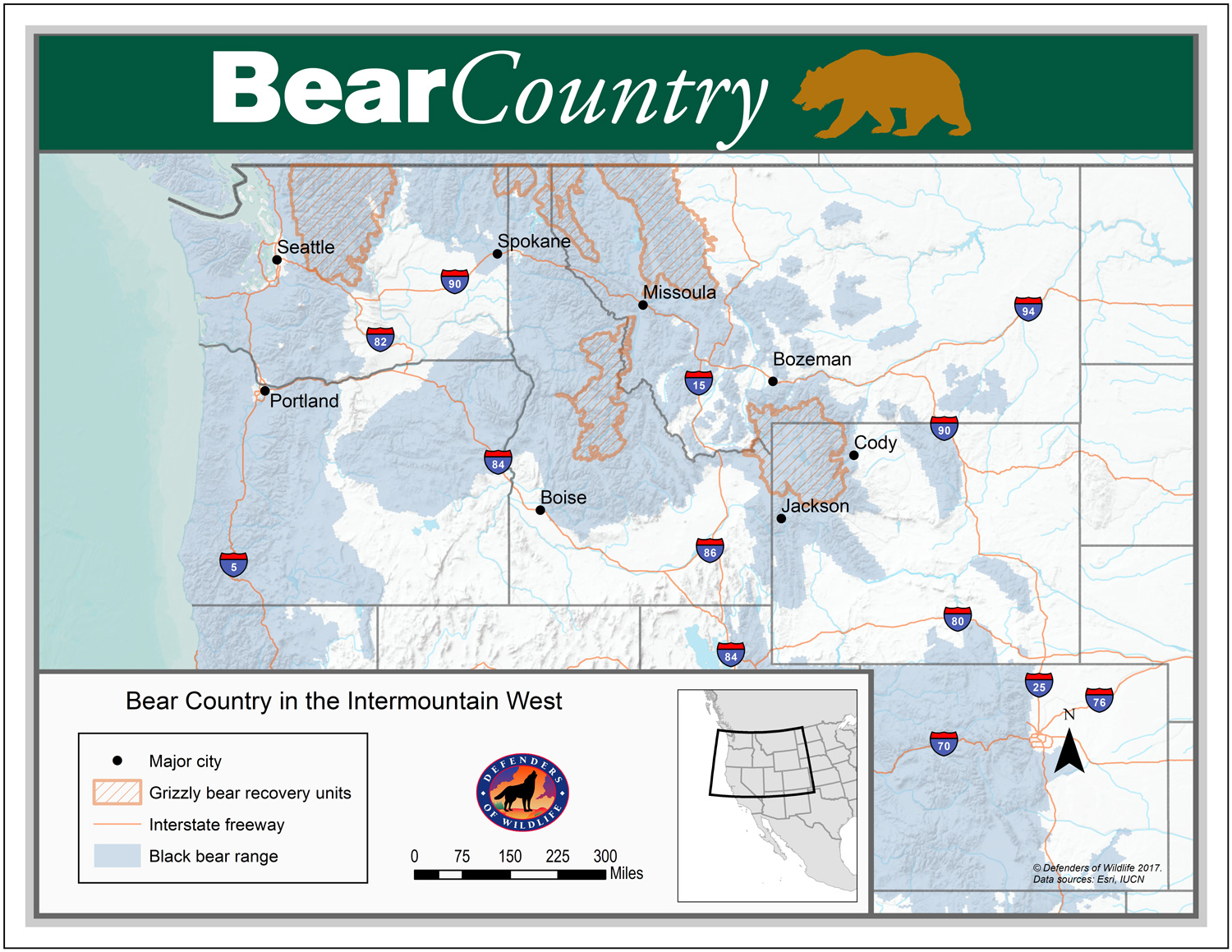 How We are Defending Bears:

Less than 2,000 grizzly bears remain in the Lower 48, down from an historic population of over 50,000. Defenders is on the ground in grizzly country protecting and restoring bear populations.

Learn more about our latest work.

Here are some additional resources to help ensure your time in bear country is as safe and enjoyable as possible.