Where the Wild Things Are

From the mountains to the prairies to the oceans, our national refuge system protects places for wildlife

With the closest paved road 50 miles behind me and the nearest town at least three hours away, this expansive area beneath the Big Sky of Montana is the perfect habitat for the elusive and endangered black-footed ferret. 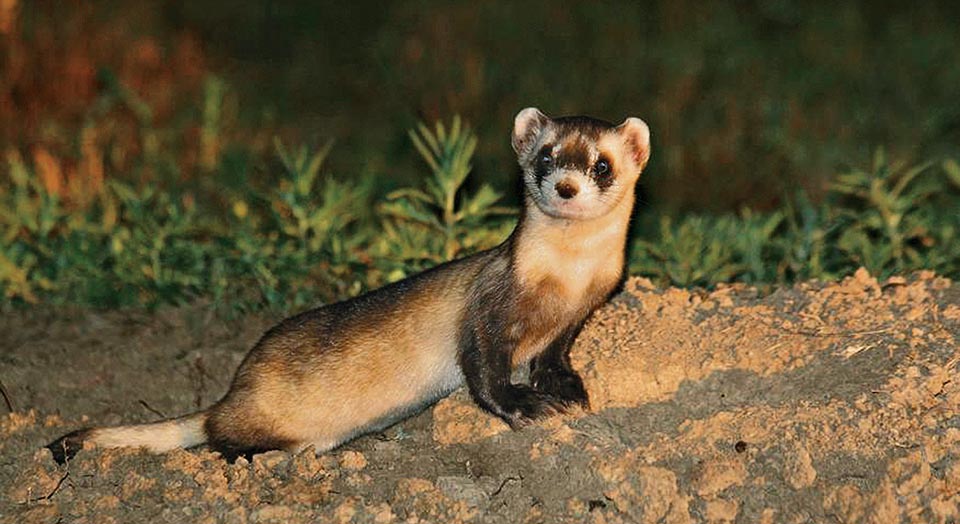 Prairie dog towns are the all-inclusive resort of the grasslands, with burrows providing homes for black-footed ferrets, rattlesnakes, swift foxes and burrowing owls. More than 100 wildlife species depend on prairie dog towns and their burrows for shelter and food, taking advantage of the prairie dog’s hospitality. And on this crisp fall day, I am here with U.S. Fish and Wildlife Service colleagues, Native American partners and local officials to bring some guests: a truckload of captive-bred black-footed ferrets. This species, once widely distributed throughout the Great Plains, was thought extinct in the wild until a family dog named Shep sniffed out a colony in 1987 and the last 12 known ferrets in the world were captured in an effort to save the species.

When we open the back of the truck, we are met with the distinctive and musky smell of ferrets—similar to a pair of rank sweat socks forgotten at the bottom of a gym bag. As we each grab a small crate to carry to a burrow, these cute critters with their little bandit masks and furry bodies, start chattering and barking, clearly on high alert.

I open the door and wish my little guy luck. After some coaxing, he sticks his nose out and quickly escapes into a hole. Others scamper around, some standing their ground against us until, after a few more minutes of scurrying around, they, too, dive into a hole.

I was fortunate enough to witness this reintroduction of black-footed ferrets in the late 1990s. Since then, Defenders has helped reintroduce more into the wild and today the population, though still endangered, has increased to 500. Shep, and a federal government determined to right a wrong, gave these marvelous animals a second chance. But also crucial to keeping this species from disappearing was the Charles M. Russell National Wildlife Refuge itself—a protected, undeveloped haven where the ferrets could find a foothold to a once-nonexistent future. This refuge is not the only one to welcome an endangered species back to the wild. Hopper Mountain National Wildlife Refuge in the steep and rugged mountains of Ventura, California, has been the site of an amazing recovery effort for endangered California condors. Patuxent, Aransas, Chassahowitzka and Necedah national wildlife refuges have all played vital roles in the recovery of the endangered whooping crane, and Mortenson Lake was created to protect the endangered Wyoming toad. In fact, 59 refuges were created specifically to help recover imperiled species, including bats, cavefish, sea turtles, manatees, lizards and even some endangered plants.

Yet, refuges protect way more than just endangered species. Dozens of refuges were established along migratory bird flyways, like Chincoteague in Virginia, the Salton Sea in California and Matagorda Island off the coast of Texas, providing essential habitat and food sources for hundreds of bird species, many of which fly thousands of miles migrating between their winter and summer nesting grounds. In fact, the first refuge ever established, Pelican Island, was to protect the last remaining brown pelican rookery on the east coast of Florida from poachers. Without these wildlife refuges, migratory birds such as whooping cranes, red knots, plovers, sandpipers, myriad ducks, geese and more would be pretty much out of luck in their efforts to migrate, breed and feed the next generations.

National wildlife refuges are peaceful and idyllic places to observe a busy prairie dog town, to gaze at a bald eagle pair tending a nest, see large herds of bison, elk and deer grazing on the prairies, or to spot frogs in a quiet pond. But refuges are really the workhorses of our public lands. They provide critical resources for increasingly squeezed and stressed wildlife populations. Climate change and a growing, expanding human population, with its accompanying roads, cities, utilities, lighting and other development, make our refuge lands more important than ever to wildlife species just trying to survive.

Thankfully, those of us who support and cherish these diverse lands have been able to defeat all of these proposals. But we must remain vigilant, continuing to protect these lands so worth defending.

Our more than 560 national wildlife refuges encompass more than 150 million acres of land and water in every state and territory, from the remote Arctic National Wildlife Refuge to the salt ponds and mangroves of Sandy Point Refuge in Puerto Rico and everywhere in between. Home to more than 700 types of birds, 220 varieties of mammals, 250 kinds of reptiles and amphibians, 1,000 species of fish and countless invertebrates and plants, they provide havens for some 380 threatened and endangered species from Florida panthers to polar bears, and they have played a key role in the recovery of the bald eagle, Aleutian Canada goose, brown pelican and American alligator.

The following pages profile just a sampling of our refuge system’s importance—and beauty.

The howl of the rarest wild canid in the world can be heard here amid more than 140,000 acres of dense, wooded swamps, hardwood-pine forests and fresh and brackish marsh. Declared extinct in the wild in 1980, red wolves were bred in captivity—a precursor to the wolf reintroductions in the Northern Rockies—and first released at Alligator River in 1987—the first time a species officially extinct in the wild successfully returned to the wild. Protecting this refuge proves that saving a wild area can save a species from extinction. The Alligator River refuge is also home to one of the densest populations of black bears in the southeast, and it hosts river otters, gray foxes and endangered red-cockaded woodpeckers. Also notable: Every songbird species found in the region uses this refuge for nesting or as a pit stop during migration.

Sea turtles require long stretches of quiet, undisturbed sandy beaches with little or no artificial light to reproduce successfully, and Archie Carr National Wildlife Refuge has them. With its 2.5-mile stretch of beach along Florida’s east coast, the refuge attracts more nesting, threatened loggerheads than virtually any other place on Earth. It is also contains the most important habitat for green sea turtle nesting in North America, and even supports leatherbacks, one of the world’s largest and rarest sea turtles.

One of the most scenically magnificent wildlife and wilderness areas in North America—and one of the most fragile and ecologically sensitive ecosystems in the world—the Arctic National Wildlife Refuge is the prize of the refuge system. It’s also the largest refuge in the United States at almost 20 million acres. Its coastal plains, marshes, lakes and mountains harbor caribou, grizzly bears, lynx, polar bears, eagles, Dall sheep, wolves and great flocks of migratory birds from the Lower 48.

Established in 1939 to protect a dwindling desert bighorn sheep population, Kofa National Wildlife Refuge is nearly 1,000 square miles of peaks, canyons and rolling hills in the harsh Sonoran Desert north of Yuma, Arizona. More than 80 percent of the refuge is designated wilderness. Despite scorching hot summers and scant annual rainfall, a diverse and well-adapted suite of wildlife call Kofa home. The majority are nocturnal, foraging only at night when the temperature is cooler. They include Sonoran pronghorn, Gila monsters, desert tortoises, kit foxes, mountain lions and at least 13 species of bats that during the day rest in mountain caves or burrow beneath rocks and bushes.

On the lower Gulf Coast of Texas by the Rio Grande, thorn forest intermingles with wetlands, coastal prairies, mudflats and beaches at Laguna Atascosa National Wildlife Refuge, tying together semiarid and subtropical climates and creating space for the likes of prickly pears and mangroves, warblers, snow geese and alligators. Rare cats, including jaguarundis and spotted ocelots, prowl the brush. This refuge is the only place in the United States where ocelots are known to den. The small, endangered wild cat once roamed from south Texas into Arkansas and Louisiana. Crowds of pintails, wigeons and shovelers gather here and today the endangered aplomado falcon, once extirpated from the United States, is making a comeback and can be seen hunting the refuge’s grasslands. Located at the southern end of the Central Flyway, Laguna Atascosa has more documented species of birds—417—than any other wildlife refuge in the country.

One of the great primitive areas of the world, Okefenokee’s dark, brooding cypress swamps host one of the largest alligator populations anywhere. Once on the brink of extinction, the gator is now flourishing. Alligators are often seen basking on sunny banks—and babies are frequently seen riding on their mother’s back or head. (Alligators are the only reptile that cares for eggs and young.) Okefenokee’s 400,000 acres of freshwater lakes, dotted with islands and shallow prairies is home to wood storks, roseatte spoonbills, prothonotary warblers and thousands of roosting and nesting herons, egrets and white ibises. It’s one of the last strongholds for black bears in the Deep South and perhaps one day the endangered Florida panther could silently make its way back here along forest paths.

At more than 33,000 acres, Horicon Marsh is one of the largest freshwater marshes in the United States—formed by a great glacier during the last ice age. Recognized as a wetland of international importance, the marsh provides essential habitat for more than 300 species of birds as well as foxes, turtles, frogs, bats, dragonflies and fish. Muskrats, the great marsh engineers, are often seen swimming with mouthfuls of cattails that they use for food and home construction. Opening up the dense cattail stands creates space for invertebrates—an important food source for most of the creatures that thrive here. Originally established for redhead ducks, the refuge—which now supports the largest redhead nesting population east of the Mississippi River—also hosts impressive numbers of American white pelicans, Canada geese and sandhill cranes. Small pockets of forest habitat provide food and shelter for migrating warblers and resident woodpeckers. It’s also a great spot to find woodland wildflowers like white trillium.

Turning the tide on the problem of marine debris

Where Has All the Water Gone? 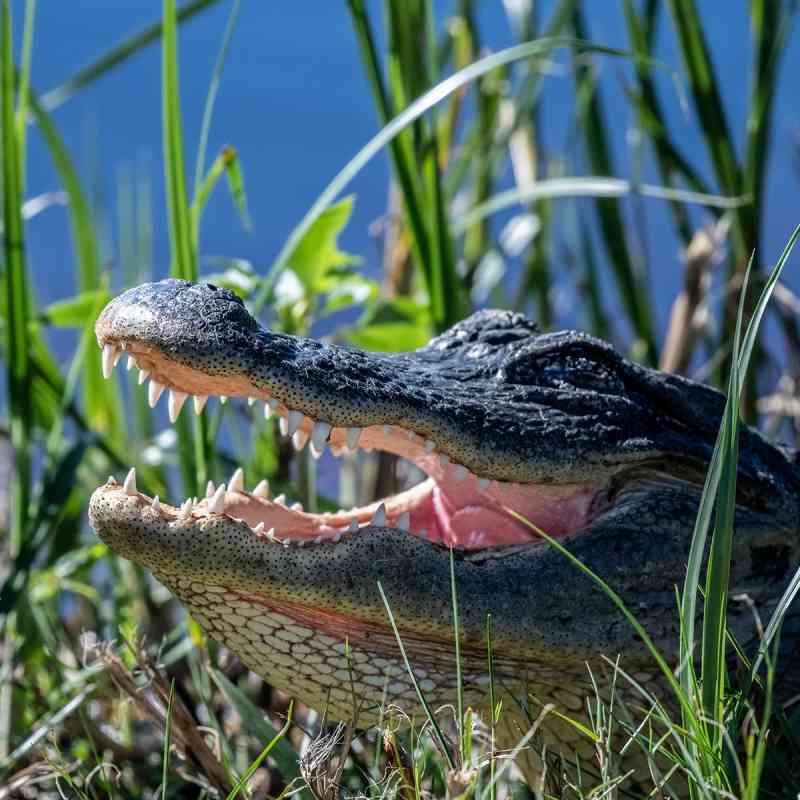