Battle for the Blue Bloods 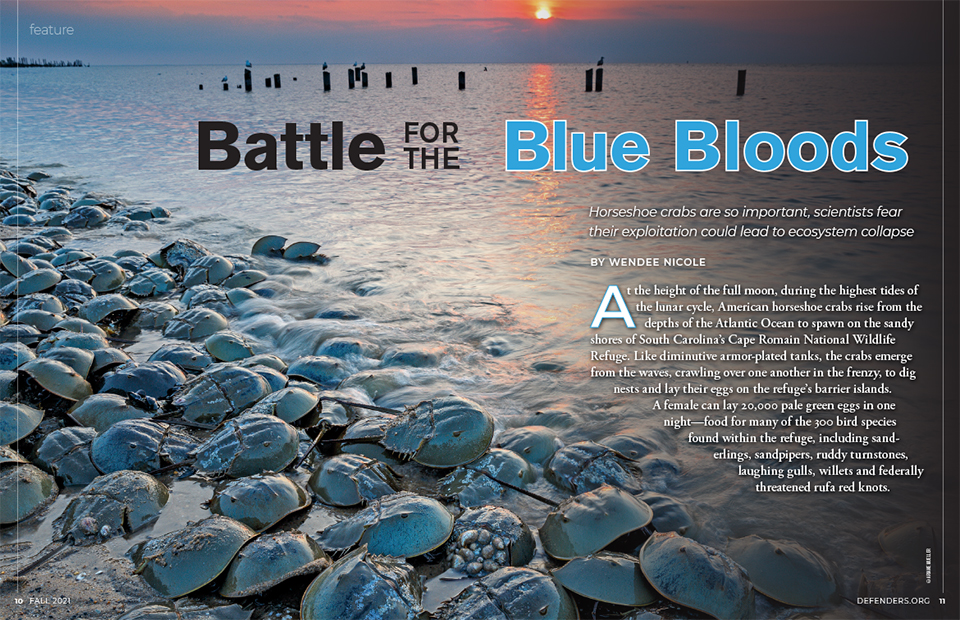 At the height of the full moon, during the highest tides of the lunar cycle, American horseshoe crabs rise from the depths of the Atlantic Ocean to spawn on the sandy shores of South Carolina’s Cape Romain National Wildlife Refuge. Like diminutive armor-plated tanks, the crabs emerge from the waves, crawling over one another in the frenzy, to dig nests and lay their eggs on the refuge’s barrier islands.

A female can lay 20,000 pale green eggs in one night—food for many of the 300 bird species found within the refuge, including sanderlings, sandpipers, ruddy turnstones, laughing gulls, willets and federally threatened rufa red knots.

But hungry birds are not all that awaits these moonlit crawls. Horseshoe-crab harvesters in boats line the shores ready to scoop up as many as possible and deliver them to a nearby facility where as much as a third of their unique blue blood will be drawn for use by a little-known medical industry worth $500 million annually.

Although several of Cape Romain’s islands are off-limits to human visitors from February to September, that does not stop collectors contracted by Charles River Laboratories from illegally harvesting the crabs. Over the years they’ve received only wrist slaps from the refuge for taking the crabs to bleeding facilities.

To address the exploitation, Defenders of Wildlife and the Southern Environmental Law Center filed a lawsuit against the U.S. Fish and Wildlife Service (FWS) in 2020, charging that the government did not study how horseshoe crab harvesting affects threatened migratory birds. The lawsuit also charged that the refuge—whose mission is to protect wildlife—was enabling the overharvest. In August, FWS decided to comply with the law and said it would regulate the harvest.

“Refuges should be the last place where commercial harvesting occurs for a species that imperiled wildlife depends on,” says Ben Prater, Defenders’ Southeast program director.

The red knots, for example, are uniquely reliant on horseshoe crabs. Every spring, flocks fly from the tip of South America’s Tierra del Fuego to the Canadian Arctic to breed, stopping with precarious timing to refuel on crab eggs. The fewer eggs consumed, studies show, the less likely a red knot will make it. Their plummeting numbers are closely correlated with horseshoe crab population declines.

But the impact of the harvest goes beyond the species that rely on the refuge.

Having survived and thrived for at least 450 million years—seeing ice ages and dinosaurs come and go—horseshoe crabs are considered by many a keystone species, and some scientists fear entire ecosystems could collapse without them.

This is particularly true for the beaches of Delaware Bay and South Carolina, two of the country’s most important horseshoe crab spawning grounds. This spawning activity brings millions of eggs to the surface where shorebirds can easily eat them, with excess washing into the sea, providing food for fish and other sea creatures.

The crabs spend much of their lives on the ocean bottom, feeding on worms and clams, and while their tough shell protects them from many predators, loggerhead sea turtles and tiger and hammerhead sharks feed on the adults. Many other marine animals feed on smaller juvenile crabs.

“When you combine all the evidence, you’re looking at a species that is critically important to the entire food web,” says Christian Hunt, Defenders’ Southeast program representative.

“When we were doing our early work, there was never any concept that horseshoe crabs could be overharvested because there were just so many,” says Larry Niles, a wildlife biologist in private practice who has studied the crabs and shorebirds for four decades. “But within maybe two to three years, the harvest had reached 2.5 million each year and it wasn’t long before egg densities declined rapidly.” Horseshoe crab egg densities in Delaware Bay plummeted from over 100,000 to fewer than 5,000 per square meter. Red knot populations declined at the same time from roughly 65,000 to 12,000.

“When we first started our battle over bait and blood, we thought it was about birds,” says Niles. “What we found in Delaware Bay is that its greater value is its influence on the productivity of the ecosystem. When you look at the productivity of Delaware’s fishery, it declined exactly along the same time as horseshoe crabs.”

With the crabs value underestimated, it made it easier to justify their exploitation. “Because they’re ‘worthless’,” says Niles, “we can bleed them to death, or we can take half their blood and put them back and say they’re going to live, but really we have no idea if they’re going to live.”

Pharmaceutical companies, including Charles River Laboratories in South Carolina, capture more than half a million horseshoe crabs each year to draw their blue blood, which is extremely sensitive to toxins from bacteria.

The U.S. Food and Drug Administration approved use of horseshoe crab blood for a standard test known as Limulus amebocyte lysate or LAL testing in the 1970s, and its use has risen steadily since. “Any foreign body that gets in a horseshoe crab’s blood is immediately attacked by the immune system and clots around that infection,” explains Prater. “This unique attribute of their blood can be used in a laboratory setting to test for the cleanliness of medical devices and instruments, everything from implants to vaccine needles.” It’s a booming industry: One quart of horseshoe crab blood sells for $15,000.

After capturing the crabs from their spawning sites, they’re brought to bleeding facilities where laboratory assistants line them up, strap them in, puncture their hearts and draw out their life force through a straw, like something out of an invertebrate Handmaid’s Tale.

“They drain as much blood out of the heart as they can,” says Eron Higgins, visiting assistant professor of marine science at Eckerd College. “When they release them, the crabs are completely anemic.” Higgins has studied horseshoe crabs in Florida for several years, a population that has remained steady and is not currently harvested commercially.

“Once these animals are thrown back, they can be lethargic,” says Prater. “They can lose their ability to navigate. They can have all these sublethal impacts that affect their ability to effectively spawn or survive.” According to scientific studies, nearly a third can die, and companies prefer females to males because of their larger size, which puts the future population at risk.

“We’re asking that industry be accountable to federal law and regulation around public resources, particularly national wildlife refuges, which have a higher purpose than being available for corporate spoils,” says Prater. “Charles River and this industry operate behind closed doors. They have a complete monopoly over a public trust resource that is a keystone species within the marine ecosystem, but they don’t disclose to the public how many they harvest, how many they kill a year, or where crabs are harvested. From what we can tell it’s essentially like the Wild West out there.”

While the medical industry relies on LAL from horseshoe crabs, synthetic alternatives do exist. Studies show that recombinant Factor C (rFC) is equally, if not more, effective than LAL at detecting bacterial endotoxins.

“Viable, ethical, efficient alternatives in the market can easily be leveraged for mass vaccinations, among other medical uses,” says Prater. But the main reason they don’t use the synthetic is that harvesting is basically free.

“They pay almost nothing to take the crabs,” says Higgins. “They don’t pay to manage them. The permitting fees are almost nothing.” Charles River has led efforts to publicly criticize the synthetic alternative, publishing a scientific paper that resulted in a formal editorial “expression of concern” over the study’s conclusions. The industry also influences fisheries regulatory boards, such as the Atlantic States Marine Fisheries Commission (ASMFC).

“These are not individual fishermen caught with an illegal fish on a boat,” says Niles. “These are multinational corporations influencing regulatory systems.” In 2019, the ASMFC developed an assessment of horseshoe crab stocks that all but gave industry a free pass.

“They said the South Carolina population is healthy,” says Hunt, “but the only way they got to that conclusion is by combining data with Georgia, which has a robust, unharvested population. So, it created this false narrative.”

And these concentrations may be deceiving. Wild populations are known to crash suddenly and never recover. “Because harvesters target females and because horseshoe crabs are long-lived, changes and impacts to their population dynamics might not manifest for many years,” emphasizes Hunt. “Charles River needs to stop impeding the widespread adoption of the synthetic and allow this industry to make the transition—not just for the sake of horseshoe crabs but also migratory shorebirds, loggerhead sea turtles and fish.”

It’s not too late: Horseshoe crab and red knot populations should have the capability to fully recover if given a chance. “As soon as this bleeding stops, our marine ecosystems will change in a profound way for the better,” says Hunt. “We’re not going to get the massive migration of bison or passenger pigeons back. But we can restore horseshoe crabs and red knots to their former glory, and that would be quite the spectacle.”

Horseshoe crabs are lined up and bled for their blue blood at Charles River Laboratories (above) before being returned to the wild. Nearly a third do not survive the procedure.

Defenders of Wildlife has teamed up with Jeff Corwin, a wildlife biologist, well-known television personality and Defenders member, to bring a new television series into homes across America every Saturday morning beginning in October.

Studies show that light pollution can increase risks for obesity, sleep disorders, depression and diabetes. Moreover, as much as half of outdoor lighting is wasted because it is poorly aimed or unshielded, which increases emissions that contribute to climate change.

Fight for Your Rights

In the fight to save critically endangered North Atlantic right whales, new data is showing that entanglement in lobster gear is not only killing the whales, it’s making them more than three feet shorter on average than those born 30 to 40 years ago.

Leave It to Beavers