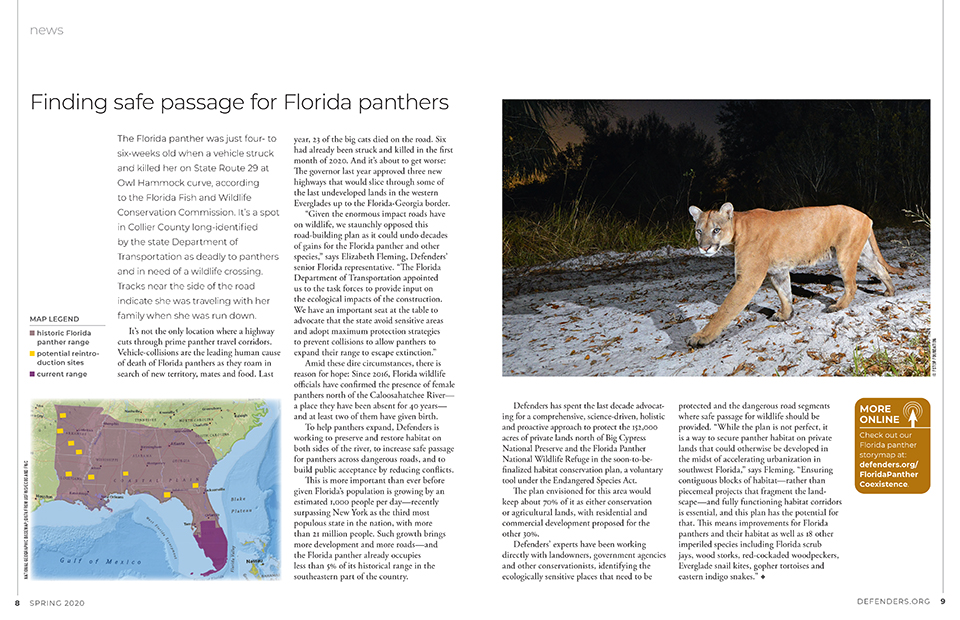 The Florida panther was just four- to six-weeks old when a vehicle struck and killed her on State Route 29 at Owl Hammock curve, according to the Florida Fish and Wildlife Conservation Commission. It’s a spot in Collier County long-identified by the state Department of Transportation as deadly to panthers and in need of a wildlife crossing. Tracks near the side of the road indicate she was traveling with her family when she was run down.

It’s not the only location where a highway cuts through prime panther travel corridors. Vehicle-collisions are the leading human cause of death of Florida panthers as they roam in search of new territory, mates and food. Last year, 23 of the big cats died on the road. Six had already been struck and killed in the first month of 2020. And it’s about to get worse: The governor last year approved three new highways that would slice through some of the last undeveloped lands in the western Everglades up to the Florida-Georgia border.

“Given the enormous impact roads have on wildlife, we staunchly opposed this road-building plan as it could undo decades of gains for the Florida panther and other species,” says Elizabeth Fleming, Defenders’ senior Florida representative. “The Florida Department of Transportation appointed us to the task forces to provide input on the ecological impacts of the construction. We have an important seat at the table to advocate that the state avoid sensitive areas and adopt maximum protection strategies to prevent collisions to allow panthers to expand their range to escape extinction.”

Amid these dire circumstances, there is reason for hope: Since 2016, Florida wildlife officials have confirmed the presence of female panthers north of the Caloosahatchee River—a place they have been absent for 40 years—and at least two of them have given birth.

To help panthers expand, Defenders is working to preserve and restore habitat on both sides of the river, to increase safe passage for panthers across dangerous roads, and to build public acceptance by reducing conflicts.

This is more important than ever before given Florida’s population is growing by an estimated 1,000 people per day—recently surpassing New York as the third most populous state in the nation, with more than 21 million people. Such growth brings more development and more roads—and the Florida panther already occupies less than 5% of its historical range in the southeastern part of the country.

Defenders has spent the last decade advocating for a comprehensive, science-driven, holistic and proactive approach to protect the 152,000 acres of private lands north of Big Cypress National Preserve and the Florida Panther National Wildlife Refuge in the soon-to-be-finalized habitat conservation plan, a voluntary tool under the Endangered Species Act.

The plan envisioned for this area would keep about 70% of it as either conservation or agricultural lands, with residential and commercial development proposed for the other 30%.

Defenders’ experts have been working directly with landowners, government agencies and other conservationists, identifying the ecologically sensitive places that need to be protected and the dangerous road segments where safe passage for wildlife should be provided. “While the plan is not perfect, it is a way to secure panther habitat on private lands that could otherwise be developed in the midst of accelerating urbanization in southwest Florida,” says Fleming. “Ensuring contiguous blocks of habitat—rather than piecemeal projects that fragment the landscape—and fully functioning habitat corridors is essential, and this plan has the potential for that. This means improvements for Florida panthers and their habitat as well as 18 other imperiled species including Florida scrub jays, wood storks, red-cockaded woodpeckers, Everglade snail kites, gopher tortoises and eastern indigo snakes.”

Check out our Florida panther storymap at: defenders.org/FloridaPanther Coexistence.

New Lawns for Hot Times In the 100 years since