Amid a sea of dangers, Kemp’s ridley sea turtles hang on 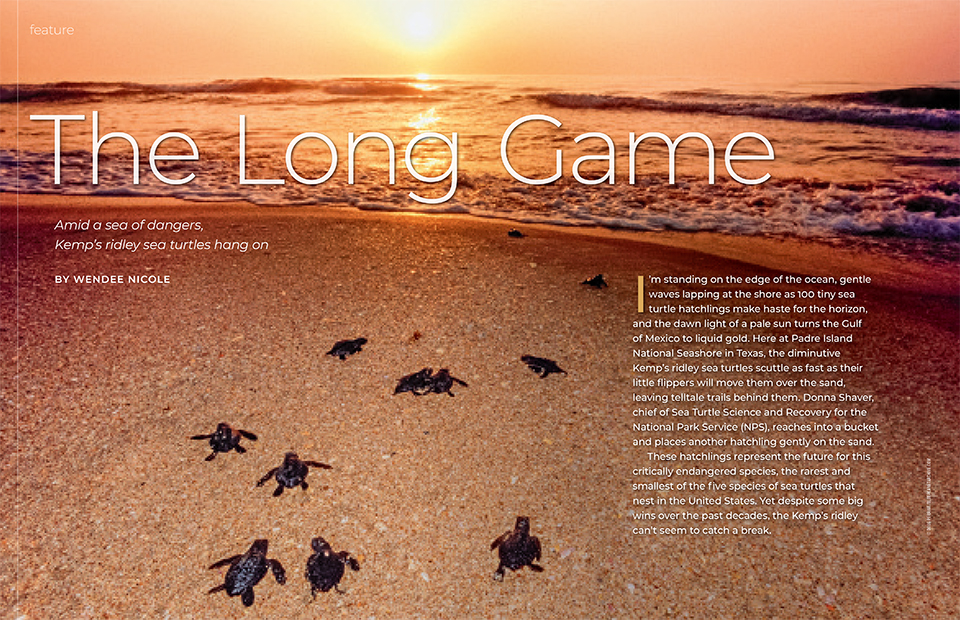 I’m standing on the edge of the ocean, gentle waves lapping at the shore as 100 tiny sea turtle hatchlings make haste for the horizon, and the dawn light of a pale sun turns the Gulf of Mexico to liquid gold. Here at Padre Island National Seashore in Texas, the diminutive Kemp’s ridley sea turtles scuttle as fast as their little flippers will move them over the sand, leaving telltale trails behind them. Donna Shaver, chief of Sea Turtle Science and Recovery for the National Park Service (NPS), reaches into a bucket and places another hatchling gently on the sand.

These hatchlings represent the future for this critically endangered species, the rarest and smallest of the five species of sea turtles that nest in the United States. Yet despite some big wins over the past decades, the Kemp’s ridley can’t seem to catch a break.

Earlier last century, scientists documented between 121,000 and 181,000 nesting in a season, mostly in Mexico. But in one of the most dramatic cases of species decline in the world, the number of nesting turtles plunged to just 702 by 1985.

In a desperate shot to save the species, scientists from Mexico and the U.S. crafted a binational plan to formally protect the main Kemp’s ridley nesting beach at Rancho Nuevo in Mexico, while attempting to create a second nesting location in the U.S. as a safeguard. It was a novel approach, based on the idea that most sea turtles imprint on the beach where they hatch and the females will return there as adults to lay eggs.

Beginning in 1978, biologists transferred coolers full of Kemp’s ridley eggs and sand from Mexico to a lab on North Padre Island in Texas to incubate and hatch. They released the hatchlings on the beach, allowed them to scuttle into the surf, then recaptured them to rear in captivity for about nine months before tagging and setting them free.

Between 1979 and 1988, nearly 24,000 tagged turtles were released in the Gulf of Mexico, mostly off the Texas coast. Then on a memorable summer day in 1996—after the U.S. Fish and Wildlife Service had thrown in the towel on the experiment—Shaver and her crew, who patrolled the 80 miles of North Padre Island beachfront every day, found a nesting Kemp’s ridley. The plan to save the species had worked.

Every year since, more and more ridleys have returned to Texas to nest. As in Mexico, their nests are protected, resulting in nearly 20,000 of the turtles nesting throughout their range by 2009. While still only a fraction of what once was, the species seemed on a clear path to recovery.

But protecting nests can only go so far. When hatchlings reach the ocean, seabirds, sharks and other wildlife feast on them. Under natural conditions, only one in 1,000 hatchlings survives to adulthood. And little is natural about the world they face today.

If the sea turtles reach a year, they’ll be dinner-plate-size and making their way to nearshore estuaries along the Gulf Coast from Texas to Florida. These waters are fraught with dangers—plastic pollution, fishing gear, refineries that degrade habitat and the lingering effects of the 2010 Deepwater Horizon oil spill.

The Kemp’s ridley, a species that breeds and nests exclusively within the Gulf of Mexico, was particularly hard hit by the Deepwater catastrophe. Of all the sea turtles that washed ashore following the disaster, the majority were Kemp’s ridleys. Adding to that, scientists found those that wash ashore represent only about 5 percent of the total number that die. Wind and currents carry carcasses out to sea, where they sink or are eaten by scavengers.

“In 2009, the general consensus was that the Kemp’s ridley was coming back,” says Thane Wibbels, a University of Alabama biology professor. “The best modelers we had said, ‘At this point, you don’t have to worry about this species.’ Some thought they could soon downlist the species to threatened under the Endangered Species Act. But then Deepwater Horizon happened. Every year, numbers had been going up, going up, going up—and then all of a sudden, they take this big plunge.” In 2019, a decade later, only about 11,000 nested throughout their range.

Did Deepwater Horizon, which dumped 210 million gallons of oil and nearly 2 million gallons of dispersant into the Gulf over three months, set the species back? Could it be warming oceans causing drastic increases in dead and stranded turtles in the Gulf and off the Atlantic Coast? Or is this simply the “new normal” in a Gulf of Mexico devastated by pollution and overfishing?

Closer to shore, the oil crept into the habitats of bottlenose and Atlantic spotted dolphins and the habitat where Kemp’s ridleys congregate to mate. Sea turtles and marine mammals alike are slow-growing, late-maturing species that are particularly vulnerable to such devastating spills and take a long time to recover.

With the fishing industry, sea turtles face a gauntlet of hooks and nets. Trawlers meant for harvesting shrimp unintentionally trap sea turtles underwater. Unable to surface for air, they drown. Baited longlines also attract, hook and drown sea turtles. “Defenders advocates for increased enforcement of existing trawling regulations, the closing of sensitive areas to shrimp trawling and the broader use of escape hatches or other devices to keep turtles from drowning in trawling gear,” says Davenport.

Escape hatches known as turtle excluder devices, or TEDs, have had a positive impact on the population by helping larger adult turtles, says Paul Sanchez-Navarro, Defenders’ senior representative in Texas. But they don’t work as well for younger or smaller sea turtle species, like the ridley.

Inconsistent use of TEDs by shrimpers is also a problem. Not all shrimp vessels are required to use them, and enforcement of the 1987 law is poor at best. In fact, many of the dead turtles that turned up following the oil disaster had shrimp in their stomach, which is not normally part of a Kemp ridley’s diet. It provided strong evidence that the sea turtles died after being submerged too long in shrimp gear. Research is underway to improve TEDs but has yet to produce a more effective version.

Under the Trump administration, the National Oceanic and Atmospheric Administration (NOAA) recently passed a regulation to expand the shrimping season and depths at which trawlers can fish. “Defenders submitted comments based on all the research that has come out that juvenile Kemp’s ridleys are feeding in the northern Gulf of Mexico,” says Sanchez-Navarro, “and that’s exactly where shrimping will now increase.” On top of a decline in the Gulf of Mexico’s health, liquid natural gas (LNG) terminals and oil refineries continue expanding along the Gulf Coast. Not only do these pollute the area, their construction destroys coastal wetlands where young Kemp’s ridleys and other marine life feeds. New LNG terminals are slated for Corpus Christi, near the Kemp’s nesting grounds on Padre Island, as well as Brownsville, Texas, which plans to dredge the ship channel at least 10 feet deeper.

“With the LNG refineries in operation, there will be many more ships coming out of there,” says Sanchez-Navarro. “This increases the chances of collision with sea turtles, especially during nesting season.” Males hang offshore during mating season, while females go back and forth between the beach and the males. Increased boat traffic anywhere along the Texas-Mexico coastal area increases risk to the turtles. And when it’s time to go to Rancho Nuevo, where most of them nest, Kemp’s ridleys don’t cut across the Gulf of Mexico. They stick close to shore, where construction impacts their migration.

Although the number of nesting females has plateaued, hatchling survival has risen sharply because more nests and hatchlings in Texas and Mexico receive protection from predators. “All nests are important because they’re an endangered species,” says Sanchez-Navarro.

“For every nest, we carefully excavate the eggs, pack them up and take them to an incubation facility,” Marshall says. “If we leave them in the ground, they could be inundated by high tides or they could be predated upon. We’ve lost a lot of beach by storms. When protected, we get a much higher hatching rate.”

Ridley eggs take between 45 and 55 days to incubate. Once one turtle hatches in a nest—including in the artificial nests in Shaver’s laboratory—others sense movement and start to hatch as well. This initiates a frenzy of movement, giving the hatchlings energy to climb up through the sand toward fresh air. Once they surface, they must be released within a certain window of time. That burst of energy that gets them to the top also enables them to scramble down the beach to the waiting waves.

As today’s releases head down the beach, they leave trails that glisten in the morning light. The first ocean wave that catches and tosses the tiny creatures back and sideways serves as a visual reminder of how long the odds are against each one of them. But thanks to passionate scientists, the legal, policy and educational work of Defenders of Wildlife and partners, and the people who care about saving endangered species, the world’s rarest sea turtle presses on. u

Based in Houston, Wendee Nicole has also written for Nature, National Wildlife and Scientific American.

New Lawns for Hot Times In the 100 years since