DEBBIE TUBRIDY, WHEN I GROW UP 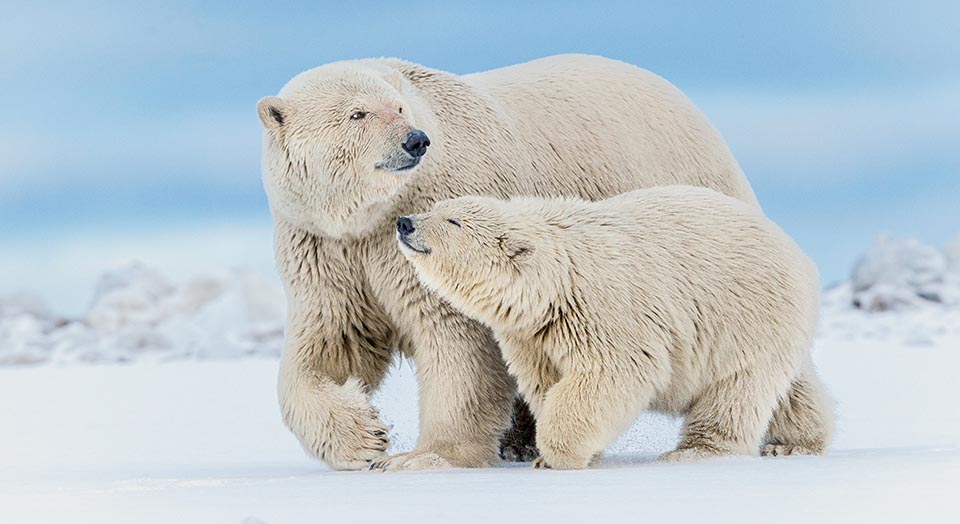 Debbie Tubridy can’t get enough of bears. Every year she travels to see and photograph Alaska brown bears. But this time she traveled to see polar bears in Kaktovik, a remote Inupiat village on the northern edge of the Arctic National Wildlife Refuge. Here, local guides take photographers out in small boats, putting them at eye level with adult bears and their cubs waiting at the water’s edge for ice to form and seal hunting to begin. “I was so impressed with how sweet the moms were with the cubs,” says Tubridy. “The moms were rolling around and playing with the cubs, having the best time.” She loves this particular picture because it looks like the cub is smiling at mom. Seeing the polar bears waiting for the ice gave her a real understanding of what they are up against because of climate change. Tubridy loves to share her photographs and says, “Many people will never go to places like Kaktovik, but I can help educate them through my images and experiences. If my images can evoke an emotion and motivate someone to do something, that’s great.”

The light. That’s what Barbara Swanson and her photography club focused on when the snow coach stopped at this picturesque site in Yellowstone National Park. In the distance, they noticed bison. After a while, the bison came through the changing mist and spread out at just the right time. “It was a really nice pattern of light coming through, which lasted less than a minute,” says Swanson. “It takes a lot of patience. No matter if you are doing landscape or wildlife photography, you need to have the right conditions to have that magic happen. Photographs really open people’s minds to what is out there in nature.”

Photography is a new hobby for this marine engineer who rotates a month at sea with a month on land. During downtime, Michelle Pare does research on where she wants to travel next. She says that rather than buy souvenirs from places, she takes pictures. This summer while exploring the Highline Trail in Glacier National Park with another hiker, marmots kept running onto the trail and startling them. When they put down their packs to take in the view, they realized why: A marmot quickly moved in to check out their packs, hoping for a snack. “I shooed away the little devil and he ran up on the rock,” says Pare. “I got this picture then. It reminds me of the Lion King looking out over the land. It captures my heart.”

“Bristlecone pine trees are definitely some of my favorite subjects to photograph,” says Joseph Thomas, a lifelong nature lover and jazz musician. “They have such gorgeous gnarled and twisted branches, they are among the oldest living things on Earth, and they take on a haunting beauty after they die.” He has toured all over the country for his musical career, but `his heart is clearly in Colorado, where he has lived his whole life. “I could spend several lifetimes exploring this state,” he says. He captured the image of this enchanting tree after midnight on one of his many hikes. “When you come upon a scene and you know there is a great shot to be had, you really have to spend some time with your subject and look at it from every conceivable angle,” he says. “I had no doubt I had a compelling image, but when I unexpectedly caught the meteor in the frame I was absolutely blown away. I was downright giddy actually. Now I knew the shot was literally out of this world.”

In the early 1980s while searching for the best whale-watching spots, Richard Rothstein and his wife, Lori, traveled to Alaska and got hooked on the state’s amazing wilderness and variety and abundance of wildlife. Returning year after year, they eventually decided to live eight months in Alaska and four months in Florida. Recently, the couple headed to Lake Clark National Park, where they took a boat to check out the puffins on Bird Island. To their delight there was a single sea otter just offshore. In Alaska, sea otters are pretty shy, but not this one. He let them approach and “hang out with him” despite the waves and current. In this light, the 80–400 focal length lens was perfect. “A large part of getting a special image is luck,” says Rothstein. Being in the right place at the right time with the right weather conditions and the right light certainly played a role in getting this memorable photograph.

2ND PLACE DON LACY, A FISH FOR YOU

The hot and steamy Florida day didn’t deter Don Lacy from his mission to photograph a tern colony on Marco Island. Carrying 15 pounds of camera equipment and no water, he and a friend hiked three or four miles down the beach. When they spotted this couple in their mating dance, he knew the trek was worth it. “The male tern was showing off that he could be a good bread winner, bringing fish to the female,” says Lacy. Lacy stayed until sunset, his camera focused solely on the pair of terns. His determination paid off. “It was the best day of photography I have ever had,” he says. “I captured numerous gallery-quality photos. I love to capture the natural beauty around me. I hope that my children and my grandchildren will have the pleasure of seeing what I am seeing.”

Laura Bentley came upon this magnificent western toad in the boreal forest in central Alberta, Canada. The toad was resting along the banks of West Stoney Creek. She suspects this one was a female, which are larger than the males and estimates her at about five-and-a-half inches long. To keep their girth, they eat just about any type of insect they can catch. This toad is lucky to be living where she is: Canada’s boreal forest is considered the largest intact forest on Earth.

A stepping stone for dragonflies