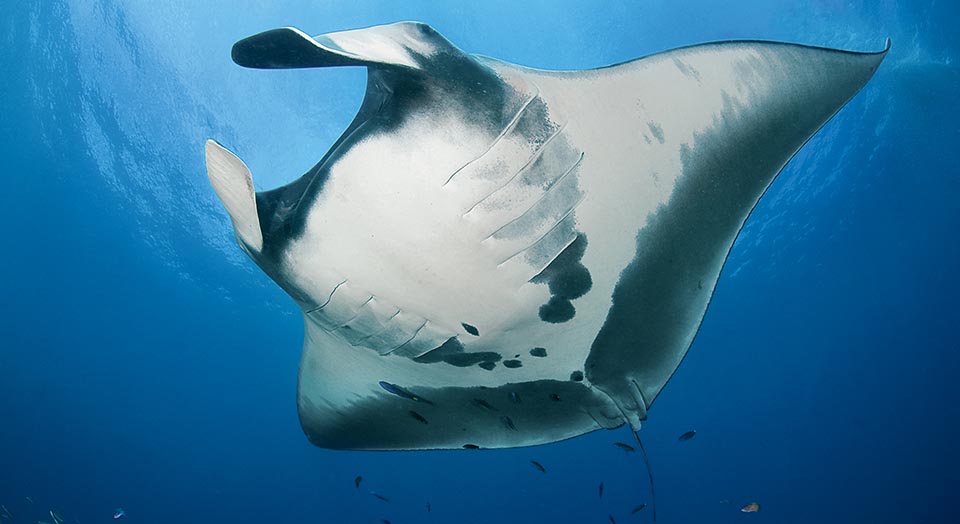 When a manta ray weighs as much as a Toyota Prius and has a 23-foot-wide wingspan—twice the size of the largest bird—calling it “giant” is an understatement.

Giant manta rays have the biggest brain to body mass ratio of any fish—and can recognize individual divers by sight—making underwater “genius” a more fitting title. In addition, each manta is recognizable by the unique pattern it bears on its underside—like a human fingerprint.

Acrobatic and graceful, manta rays can leap from the water despite their 5,000 pounds. But all their moves are harmless. Their short tail has no barb and, although related to sharks, they have no teeth. To eat, they filter microscopic plankton, small fish and tiny crustaceans using their gill plates.

As its name suggests, the giant manta ray is the biggest ray out there. But related reef manta rays are only slightly smaller—and both are in trouble from severe overfishing. Globally, populations are believed to have declined by at least 30 percent in recent years, but some specific manta populations have declined by as much as 86 percent. With no time to waste, Defenders is petitioning the National Marine Fisheries Service to protect all manta rays under the Endangered Species Act. Mantas reproduce slowly—they don’t bred until they are 15 and then have only one or two pups every two to five years. Even with the strictest protections, it will take decades for manta rays to recover.

Unfortunately—because other species have become rare—some in China are now deceptively touting crushed and dried manta ray gill plates as a cure for everything from chicken pox to cancers. As a result, the gentle giants are dying for a small, but lucrative body part. Manta ray meat is of little value, but one pound of manta ray gill plates can be worth more than $300. And as fishermen wipe out shark species, they are targeting mantas as a substitute for shark fin soup.

This threat to the survival of manta rays comes on top of climate change, which is already wiping out the coral reefs that they depend on for vital feeding stations and breeding grounds.

Although manta rays can live 40 to 50 years—some scientists speculate as long as 100—the lives of these captivating, charismatic creatures will continue to be cut short if we don’t act intelligently to end the reckless and uncontrolled killing.

A stepping stone for dragonflies