What Good Are They?

The Endangered Species Act (ESA) has helped recover national treasures like bald eagles, peregrine falcons, American alligators and gray wolves in the Northern Rockies. But the ESA has also prevented the extinction of many lesser-known creatures that are frequently overlooked or maligned, mostly because we don’t know or understand the valuable ecological roles they play in their habitats and in providing us with clean water, medicines and more. Here are a few important yet usually underappreciated species that, while not recovered, are making a comeback thanks to the ESA.

Orange You Glad?
Skinks dine on crickets, roaches and spiders, which helps keep insect populations under control. But the highly elusive blue-tailed mole skink (above) in Florida has a particularly voracious appetite: Research suggests there might be a direct correlation between the skink’s decline from loss of habitat and insect population explosions, which can cause problems for people and crops—especially the state’s orange groves.

Toad Rx
Many toad species use poisonous skin secretions to protect themselves from predators, and modern medicine has found they can also serve as important active ingredients. The Houston toad secretes serotonin—an essential chemical in our brains—and alkaloids, which are used to treat heart and neurological diseases. The alkaloids are thought to have analgesic properties more powerful than morphine. Houston toads, harmed by loss of habitat, also help keep insect populations down, provide food for larger animals such as raccoons, snakes and owls, and help move nutrients from the water to land during their metamorphosis from tadpoles to terrestrial adults. 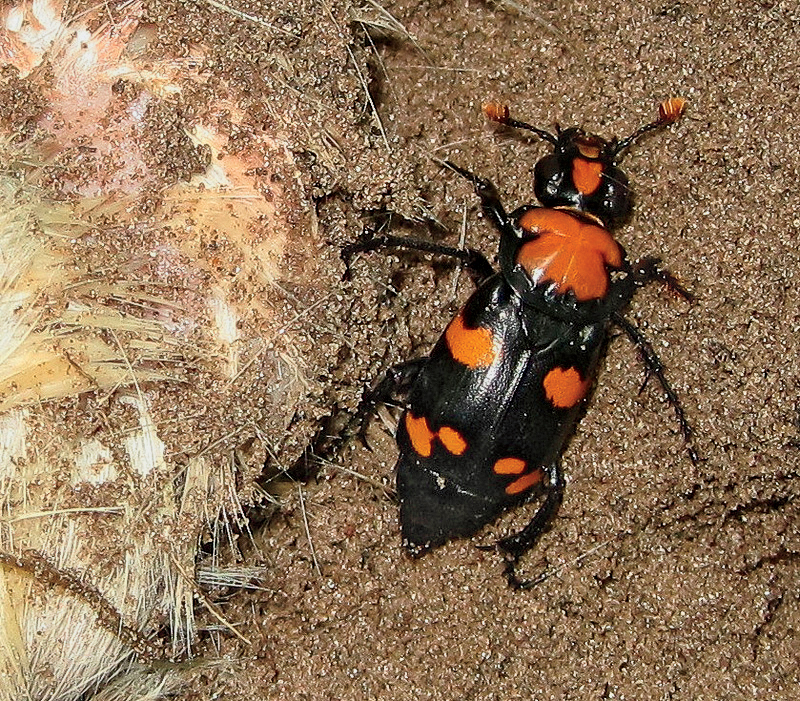 Meet the Beetles
Bugs like the American burying beetle (right) break down organic matter and recycle it into nutrients that help replenish the soil. This beetle in particular is an expert recycler, taking biological waste underground to make food for its family. The burying beetle once thrived in every state east of the Rockies, maintaining healthy ecosystems, but it has since disappeared from more than 90 percent of its historical range.

Wings of Gold
Bats consume their weight in insects each night and provide the agricultural industry with pest-control services totaling at least $3.7 billion per year. But many bat species are facing hard times. Indiana bats (right) were once among the most abundant eastern U.S. mammals. The bat landed on the endangered species list after widespread habitat destruction from the commercialization of caves, the blocking of cave entrances and harmful timber practices. Today it is also threatened by white-nose syndrome, a fungal pathogen destroying many bat populations.

Water Gauge
Nearly one third of all documented amphibians around the world face extinction, and the Barton Springs salamander (left) is no exception. These salamanders rely on the purity of the Barton Springs in Austin, Texas, for their survival. So do people, since the springs provide much of Austin’s municipal water supply. Because of their sensitive skin, salamanders everywhere serve as an important indicator of the health of a water supply.

Sanitation Snail
An Alabama native, the Tulotoma snail was thought extinct until a small group was found in 1991 along a river dam. Tulotoma snails are filter feeders that remove bacteria and algae from surface waters, providing sanitation services on local rivers. A collaborative effort with scientists, industry and government officials found a simple solution that restored the snails to about 10 percent of their historical range. In 2011, the U.S. Fish and Wildlife Service downlisted the snail from endangered to threatened under the ESA.

Free Filter
First decimated as part of the button industry in the 1950s, freshwater mussels have continued to decline from water pollution and excessive sediment from dredging and soil erosion. Mussels eat small particles that float in the water, keeping our waterways healthy and clean. These filter feeders are also reliable indicators of water quality since they’re particularly sensitive to toxic chemicals and other pollutants.

As climate change drives demand for wind energy, can technology

The sweet song of the Kirtland’s warbler still carries in