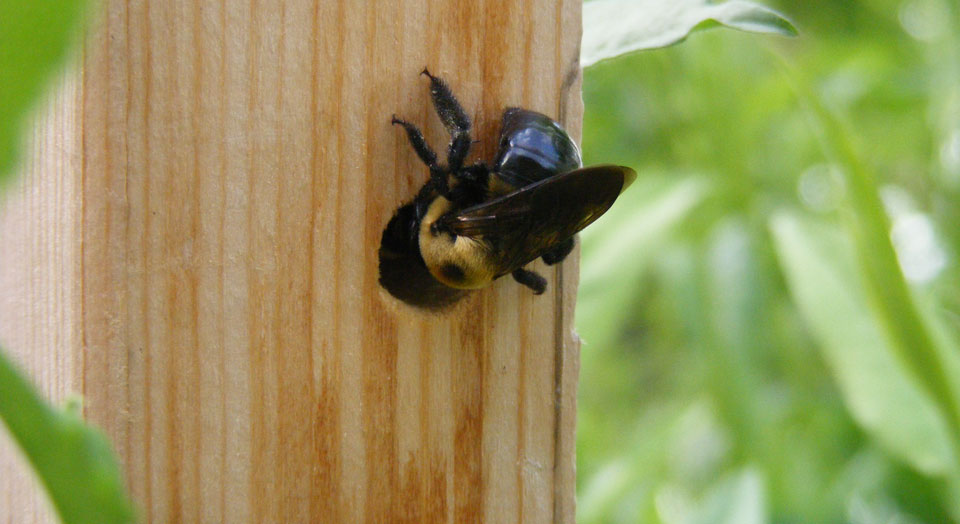 Holly Moskerintz noticed little piles of sawdust on her back deck in Washington, D.C., last spring. Looking up to see where they came from revealed tiny holes in some unpainted wood running along her gutter. Discovering the holes came from carpenter bees, she called an exterminator for advice.

“I thought they would put on a deterrent of sorts and cover the holes,” says Moskerintz. “But they sprayed instead and immediately after that, two bees fell from the hole and died right in front of me. Hearing all the time about the terrible state that pollinators are in, I wasn’t happy about the chemical they used.”

Carpenter bees are looked at as a nuisance to many homeowners, but most people don’t realize that they don’t sting. They’re actually handy to have around the garden since they’re such fantastic pollinators. Homeowners fear they will bore into decks and siding, but they really only cause minimal damage. To attract them away from the house, build simple nesting blocks out of soft wood, drilled with bee-sized holes and hung in an easterly or southerly direction. As for decks, plug the offending holes and coat them with almond oil, a deterrent. By painting or varnishing the wood, you can avoid future houseguests.

Carpenter bees are just one category among the 4,000 identified bee species in North America, many of which haven’t been named or described. These include: plasterer bees, leafcutter bees, mason bees, wool carder bees and digger bees. With honeybee  numbers critically low, wild native bees are picking up some of the pollination slack. These underrepresented bees, while not famous for it, play a big part in the production of fruits, vegetables, fibers and the ever- aesthetic pleasure of flowers.

You can make a difference by making your yard a pollinator safe haven. Plant a pollinator-attractive garden full of native flowers to encourage butterflies, bees and wasps. To get an idea of which plants best attract which species, there’s even an app for you, called BeeSmart Pollinator Gardener.

Don’t forget to check the ingredients of products used in the yard and garden. Avoid any that incorporate imidacloprid, clothianidin, thiamethoxam, acetamiprid or dinotefuran, all of which belong to the group of pesticides called neonicotinoids (see The Pollinator Predicament, page 10). To take it a step further, tell big box home improvement stores not to sell plants and seeds that are pretreated with neonics.

You can also become proactive with legislators and ask them to support banning certain pesticides, to follow ecologically friendly land use practices and to protect sensitive areas from development. Improved pesticide labeling is also key to better understand how our food is grown. By buying organic food, you can help encourage pesticide-free farming.

The more you know about what it takes to help pollinators, the better you can help ensure their survival—which is so intertwined with our own.

As Moskerintz found, the steps can be simple: “I feel bad that I acted so quickly and called an exterminator before I did any research and those bees died,” she says. “Come to find out, all I would’ve had to do is put a coat of paint on the wood and I would’ve solved my problem without pesticides.”