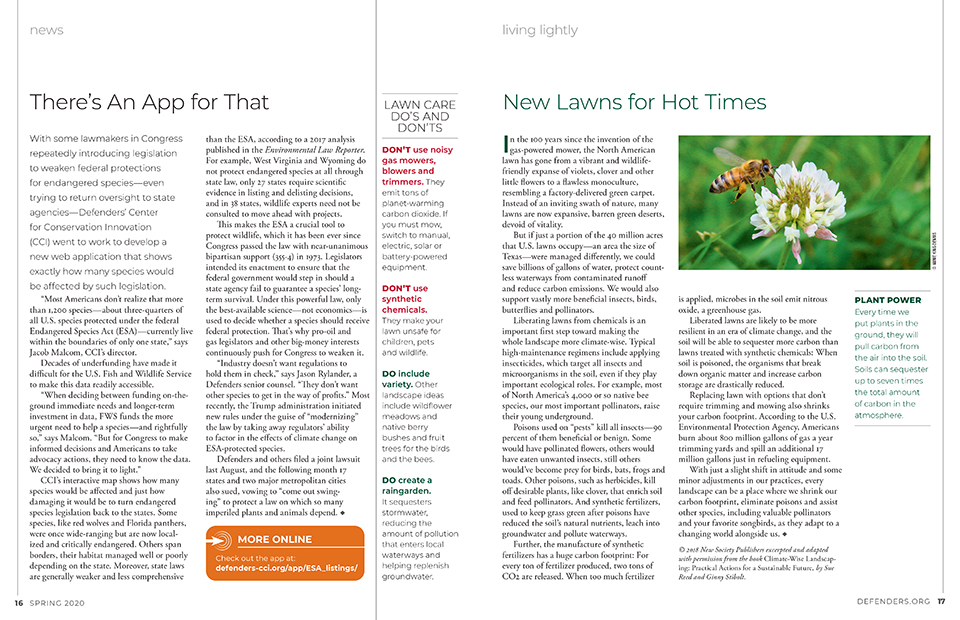 In the 100 years since the first gas-powered mower was invented—which made the lawn an achievable dream for the masses—the North American lawn has gone from vibrant and wildlife-friendly expanses of violets, clover and many other little flowers to flawless monocultures, resembling a green carpet just delivered from the factory.

Instead of an inviting swath of nature, many lawns are now expansive, barren green deserts, devoid of vitality that we water relentlessly and douse with synthetic chemicals, making it unsafe for children, pets and wildlife. The emissions of noisy mowers, blowers and trimmers dirty the air and emit tons of planet-warming carbon dioxide.

But if just a portion of the 40 million acres that U.S. lawns occupy—an area the size of Texas—were managed differently, we could save billions of gallons of water, protect countless waterways from contaminated runoff and reduce carbon emissions. We would also support vastly more beneficial insects, birds, butterflies and pollinators.

Liberating lawns from dependence on chemicals is an important first step toward making the whole landscape more climate-wise.

Typical high-maintenance regimens include applying insecticides, which target all insects and microorganisms in the soil, even if they play important ecological roles. For example, most of North America’s 4,000 or so native bee species, our most important pollinator, raise their young underground.

When poisons are used on “pests,” the majority of the insects will be killed--90 percent of them beneficial or benign. Some would have pollinated flowers, others would have eaten unwanted insects, still others would’ve become prey for birds, bats, frogs and toads.

Other poisons, such as herbicides, kill off desirable plants, like clover, that enrich soil and feed pollinators.

And synthetic fertilizers, used to keep grass green after poisons have reduced the soil’s natural nutrients, leach into groundwater and pollute waterways.

Further, the manufacture of synthetic fertilizers has a huge carbon footprint: For every ton of fertilizer produced, two tons of CO2 are released. When too much fertilizer is applied, microbes in the soil emit nitrous oxide, a greenhouse gas.

Liberated lawns are likely to be more resilient in an era of climate change, and the underlying soil will be able to sequester more carbon than lawns treated with synthetic chemicals: When soil is poisoned, the organisms that break down organic matter and increase carbon storage are drastically reduced.

Replacing lawn with options that don’t require trimming and mowing will also shrink your carbon footprint. According to the U.S. Environmental Agency, Americans burn about 800 million gallons of gas each year trimming their yards, and they spill an additional 17 million gallons just in refueling their equipment!

Small engines used for lawn care, including mowers, blowers, trimmers, leaf vacuums and edgers, emit high levels of pollutants such as carbon monoxide, hydrocarbons and nitrogen oxides. If you must mow, switch to manual, electric, solar or battery-powered equipment.

Another good choice is to create a raingarden to sequester stormwater, which reduces the amount of pollution that enters local waterways and the need for expanded municipal sewer systems. Rain gardens also help replenish groundwater or aquifers, which are under strain. Others landscape ideas include wildflower meadows and native berry bushes and fruit trees for the birds and the bees.

With just a slight shift in attitude and some minor adjustments in our practices, every landscape can be a place where we shrink our carbon footprint, eliminate poisons and assist other species, including valuable pollinators and your favorite songbirds, as they adapt to a changing world alongside us.

© 2018 New Society Publishers excerpted and adapted with permission from the book Climate-Wise Landscaping: Practical Actions for a Sustainable Future, by Sue Reed and Ginny Stibolt.

Every time we put plants in the ground, they will pull carbon from the air into the soil. Soils can sequester up to seven times the total amount of carbon in the atmosphere.

DON’T use noisy gas mowers, blowers and trimmers. They emit tons of planet-warming carbon dioxide. If you must mow, switch to manual, electric, solar or battery-powered equipment.

DON’T use synthetic chemicals. They make your lawn unsafe for children, pets and wildlife.

DO include variety. Other landscape ideas include wildflower meadows and native berry bushes and fruit trees for the birds and the bees.

DO create a raingarden. It sequesters stormwater, reducing the amount of pollution that enters local waterways and helping replenish groundwater.