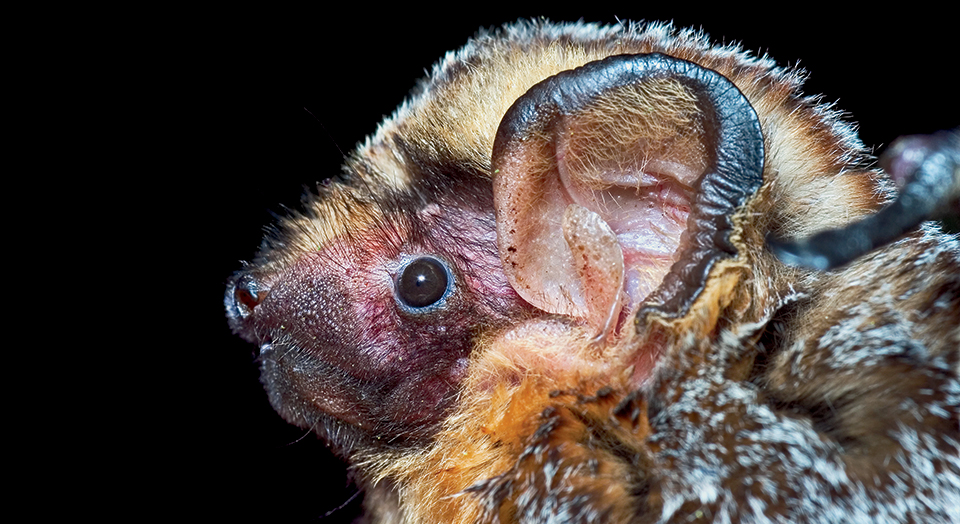 It’s rough out there for bats these days. While white-nose syndrome and its devastating effects on hibernating bats expands across the country, migrating bats—believed to be less susceptible to the disease—face a different threat: their apparent deadly attraction to wind turbines.

If actions aren’t taken swiftly, one widespread migratory bat species may face extinction in the next 50 years, according to a recent peer-reviewed study published in Biological Conservation.

Focusing on the wide-ranging hoary bat—the species most frequently killed by turbines in North America—the researchers found that the population could decline by as much as 90 percent by 2067. The results suggest that without meaningful additional measures to minimize fatalities, wind turbines may pose a substantial threat to all migratory bats, including eastern red bats and silver-haired bats, as wind-energy capacity expands.

However, promising research is underway showing that operational changes and emerging technologies can significantly minimize bat mortalities. These include powering down turbines during late summer and fall migration, when bats are most active, and deterring bats with high frequency sounds and ultraviolet light.

“When it comes to conservation, rarely do we have the opportunity to save a species before emergency measures are required,” says Jamie Rappaport Clark, Defenders’ president. “This new study is a clear warning that action is needed before the hoary bat population plummets and needs heroic measures to prevent its extinction. Fortunately, solutions to save this species appear within reach.”

To ensure these dire predictions never become reality, Defenders is teaming up with wind energy companies and conservation partners to tackle the threat to the bats. “We strongly believe that conservation organizations and the wind-energy industry need to work together if we are to address the serious threats of climate change by facilitating responsible wind-energy development without jeopardizing our country’s precious wildlife,” says Clark. “Americans do not have to choose between reducing our greenhouse gas pollution and protecting our rich wildlife legacy from energy development.”

Bats not only prey on nuisance insects like mosquitoes and flies, they also nab nocturnal insects that damage crops and forests. Some bats even pollinate fruit trees—including mango and banana.

Defenders calls on FWS to do right by jaguars